Chord solos are a great way to have some other material to use in solos to vary the sound of the single note lines. They are also a good way to get a fuller sound of the guitar almost sounding like a complete horn section in a big band, which it also will often resemble because of the melodies and voice-leading it contains.

When you work on chord soloing it is useful to take a progression that is not too complicated, so a Bb blues is a very good place to start. It also works well since the language of the blues is very present both in big band era melodies and rhythms and certainly also in the solos of guitarists like Joe Pass and Wes Montgomery who both used chord solos very often.

If you listen to the melodies I play in the solo you can hear that they are quite simple and not moving around in large intervals. You can also hear that the rhythm is very important in the phrases, which is mainly because we technically can’t move around as much with chords so the interesting parts of the solo should be found in the rhythms used. This makes the melodies rely more on riff like phrases than dense 8th note lines.

Before I go over what I am playing in the solo, let’s first have a look at some exercises to find the voicings we need to play a solo. So for each chord we are trying to harmonize the scale using only that chord, and if necessary something that is close to it (that would be harmonizing the 4th over a dominant in this lesson)

The first example is the Bb7 chord since it is a Bb Blues. The most natural scale to use on the Bb7 chord is the Eb major scale, the equivelant of Bb mixolydian. The only note that is different in this case is the 4th degree, Eb, which is harmonized with a Bb7sus4 chord.

As you can see I favour using 3 and 4 note voicings. What you might also notice is that I often try to keep only the melody moving  on top and the lower part of the chord are staying the same. The chords should be easily recognizable as derived from triads or drop2 voicings.

The same approach is used to harmonize the Ab major scale with the Eb7 chord.

Again the same note that is causing problem is the 4th degree over Eb, so the Ab. I change the chord to an Eb7sus 4 in the same way I did on the Bb7.

For the F7alt I am using the altered scale so F# melodic minor. The nice thing about melodic minor is that it does not really contain any avoid notes or notes where we need to alter the chords.

The F7alt voicings can be used for the G7 in bar 8 if you move it up two frets. Which you will also see me do in the solo.

The solo is transcribed under the analysis. I tried to keep the analysis in 2 bar fragments.

The line continues back to the first 6th fret Bb7 voicing. From there it continues to a harmonization of a chromatic blues cliché. The chord starts out as a Bb9 and the melody moves up chromatically. It concludes in a Bb7 alt that could also be seen as two E7 voicings.

On the Eb7 in bar 5  the melody is a short riff like phrase using the 5th and the 13th of the chord. The Edim is play using two drop2 voicings. The resolution back to the Bb7 is done by a chromatic approach for the 3rd interval D and F.

The line on the Bb7 in bar 7 is using 3rds to harmonize a Bb7. A subject I have made a lesson for Jazz Guitar Online on. Using the smaller 3rd intervals is a very efficient way to harmonize quicker moving melodies like arpeggios. On the G7alt line is set around the G7(#)) voicing in the 10th fret.

The II Valt phrase is first using a melody on top of a basic 8th fret Cm7 and then a short riff melody on the F7alt similar to the G7alt in the previous 2 bars.

The turnaround is a nice trick that I like to use on turnarounds with dominant chords. The harmony is Bb7(13) G7(#9) C7(13) and F7(#9). You can play the chords with the same voicing that moves around chromatically. The melody on top of the progression is played using the Bb blues scale. In that way you have one layer that is playing changes and a melody that is made up of really basic blues phrases. 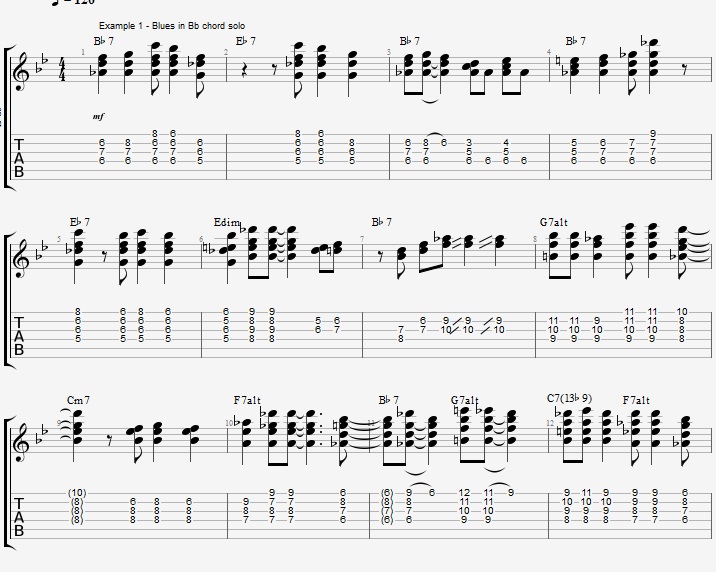 I hope you can use the exercises and this example to make your own blues solos.

You can also check out my Bb blues solo lesson with a 4 chorus transcription + lesson: