This weeks lesson is a short etude, a chord solo on an F blues. You should be able to use it as inspiration and resource to make your own chord solos but if it was played less dense it will also work well for comping.

Chord solos is a great thing to add to your repertoire to have a different approach to improvising on a song. They are of course also part of the standard vocabulary for guitar since Wes Montgomery and Joe Pass.

Here’s a transcription of what I played: 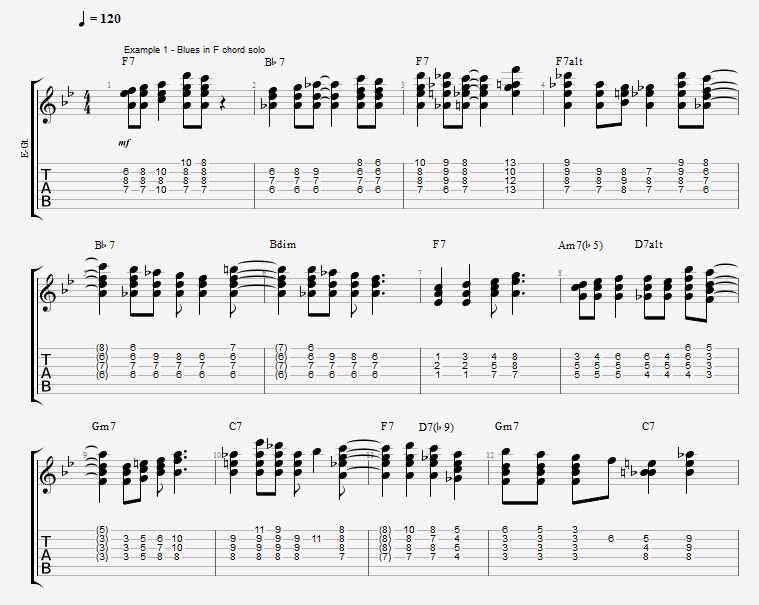 Some exercises and how to make your own

Since this is a blues in F there are a few exercises that you should make for yourself to have voicings to make the lines with. This follows the concept I talked about in the lesson on Soloing with Chords Part 1 So for each chord we are trying to harmonize the scale using only that chord, and if necessary something that is close to it (that would be harmonizing the 4th over a dominant in this lesson)

As you can see I am mostly using 3 and 4 note voicings and that I am trying to keep it easy to play. Iit can be very useful to make different versions of this exercise, for example it might work well to figure it out for the scale on the high E and for the scale on the B string. It is not so important that you play it fast, it is more important that you figure it out and use voicings that you can easily play and that connect well.

Example 3 is the same exercise for Bb7.

As you see I that whenever I have to harmonize the 4th over a dominant I am changing the chord to a sus4 chord.

For the II chord in the final cadence you could make an exercise like this:

The Valt chord in the final cadence could be coming out of this exercise.

The fact that we use melodic minor gives us a #11 instead of an 11 in the scale so we don’t need to make a sus4 chord.

As you can see in the exercises I mostly use a mix of Drops2 3 part quartal harmony and Triad based voicings in the solo and these exercises, since I find that those fit the style where I use chord soloing the best, and they are fairly easy to play.

A good way to work under stand the solo is to play it through leaving out the chords, so in fact just play trhe melody. It is easy to get lost in voicings when working on this and it is in the end about the melody and the rhythm in the solo.

The first 2 bars are a motif that I first play on F7 and then sort of repeat in Fminor on the Bb7, a melodic trick that I use quite a lot. You’ll find it in the Ornette Coleman blues Turnaround too btw.

Bars 3 and 4 are first a melody with a chromatic passing note followed by  a similar idea using the F7alt sound. You can check out how to practice Chromatic Passing chords in this lesson: Chromatic Chords – part 1

In bars 5 and 6 I am really using this altering notes in the melody to make a motif and develop it again. Since the chords are Bb7 and Bdim I have a melody consisting of C descending scalewise to F on the Bb7. The only thing I need to change to fit the dim chord is to play a B instead of a C as a first note. To me this approach to melody is very strong and creats a bigger context than just some notes on the chord.

Bar 6 is a fairly common C minor pattern harmonized with F7 chords using the scale in example 2. On the Am7b5 D7 cadence the melody is trying to stay within the 5th position so that it is easy to play.

The line on the II chord is Gm(9) followed by a scale run. In the run I uses a C major triad as a diatonic passing chord which is a sound I think works well on that chord.  The C7alt line is fairly straight ahead, for the Bb I am not playing a chord but just the note. Sometimes that works better for a line and will get the melody to stand out better where harmonizing everything would sound heavy.

The final turnaround is a fairly straight forward, on the D7b9 I am using F# dim voicings and the melody over the Gm7 is harmonized with a single chord under it, in a way similar to how Red Garland would sometimes play block chords.

Hopefully you can put these exercises and examples to work in making and playing your own chord solos.