So after many requests it is finally here: A lesson on the altered scale. The 7th mode of the melodic minor scale.

In this lesson I want to explain how I deal with the altered scale in the context of a cadence and how hearing the notes related to where they are going gives a better understanding of how the chord works.

What I mostly have heard about the altered scale is how people keep telling me it is difficult and probably the name makes it stand out. But in the end it is of course just a set of notes like any other scale and no more difficult than the rest of them. The only thing that is tricky is the function it has most of the time: To sound out of place. Altered Dominants are meant to be pulled out of the hat to sound out side for a bit and then resolve back to the surroundings at the end of the cadence. The altered chord is a dominant that acts up for a few beats and then settles down nicely to the I chord.

Try to play this:

The Eb on the G7 chord is in this case what gives the chord an altered sound, and we need to resolve it to an E or a D on the Cmajor7.

This is in a way all that we need to work on: How to resolve the notes of the altered chord (or scale) to the tonic.

Just to have a reference I am demonstrating everything using this position of the  Ab melodic minor scale or in this case G altered.

The G altered scale contains the notes G Ab Bb B Db Eb F In example 3 I have taken each of these notes and let it resolve to a note on a C major chord, so Ab resolves to G, Eb to E or D etc etc. If you play it in a C major context you can probably hear it. Try playing example 1 to establish the C major context in your ear.

All these resolution should sound pretty logical to your ear, and my guess is that you’ve already heard every one of them a thousand times before in jazz standards, tv and movie music.

Having done example 3 we can make the simplest altered II V I licks known to man, which are in fact just adding a chord note from the Dm7 to the resolutions above, as I do in example 4:

I think a lot in target notes when I practice improvising and composing. I have a lesson on target notes that demonstrates that, and how I build lines on a turnaround with some altered dominants.

To have some building blocks for your lines we need to solve the problem that the diatonic chord on the G is not a dominant so that is not going to work very well as a starting point.

I often use Fm7b5 and Bmaj7(b5) for G7 altered because the both contain the B and the F so the basic sound of the chord is there and the rest are good altered extensions on the chord:

Here are those two arpeggios in the position we are using:

The idea is that the we can make lines using 7th chord arps, triads and scale fragments like we do on any other chord, we just have to take care that we arrive well on the I chord.

Here are 3 II Valt I lines. In the video I talk a bit about how I constructed them. 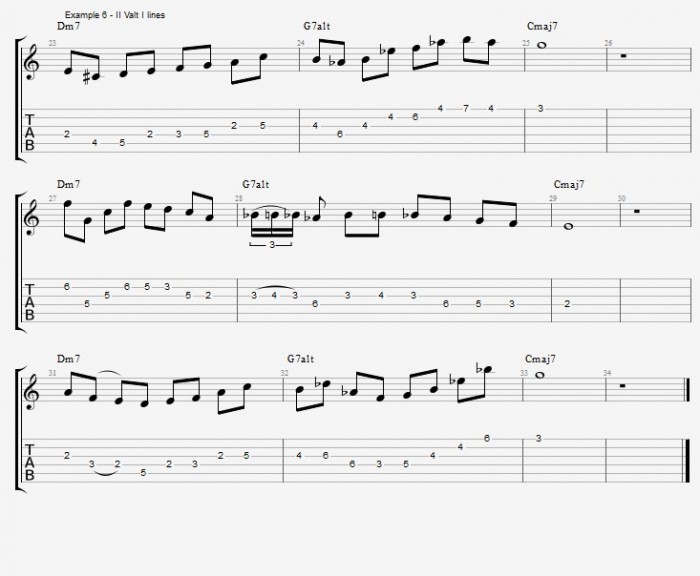 I hope that you liked the lesson. If you have any questions or comments then feel free to leave them here or on the video. Please subscribe to my YouTube channel and feel free to connect with me via Facebook, Instagram, Google+ or Twitter to keep up to date with new lessons, concerts and releases.