Creating melodies that connect and make sense across several chords and scales is a skill that you need to master if you want to be able to make solos that keep the listeners attention and is experineced as musical. In this lesson I am going to have a look at an important tool in achieving this skill: Motifs.

Once you can make your way throught the changes of a tune you are probably going to have to start working making the solo more of a coherent whole, which is a big part of what the listener will experience as a musical solo. Motifs and making variations on motifs is a fundamental tool that keeps the listeners attention by playing something that is recognize and at the same time by making variations is developed and sound surprising. If you want to hear examples of how this is used try to lesson to Beethoven’s 5th symphony, Gary Moore’s Still Got The Blues or practically any Keith Jarret solo.

I’ve chosen to use an F blues as a progression for this lesson because it’s a very common progression where you can harmonically do quite a lot to demonstrate what is needed and how it works.

Moving Motifs in a progression

There are a few ways we can work a motif over a progression. One way to do so is to transpose it so if a motiv start on the 5th of the first chord we’ll transpose it so that it is the 5th of the next chord where we play it. The melodies that we get when doing this are following the harmony in parallel and sometimes it works, but often it does not sound too great.

Another more useful way to move motifs is to keep them as close to the original and only change the notes that need to change to fit the next place in the harmony. This approach will in general sound a little less like an exercise in harmony and create a more varied melody.

The first skill we need to work on is probably to over see the notes of a melodic fragment and then to be able to alter notes to fit on other chords. In example 1 I have done this with a simple F major line. The example is quite simple and sounds a bit exercise like, but is still a good demonstration of how you could move this motif around an F Blues. 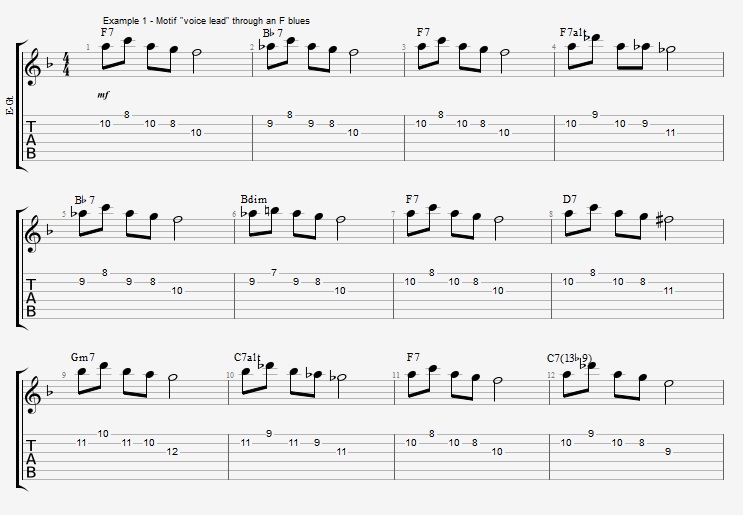 As you can see the first 4 bars keeps the motif: First F major, then F minor over the Bb7, back to major and then an F#m as an F7 altered. In the second line it is againg the Fm version over the Bb7 which then gets an added blue note over the Bdim. After that it returns to F7, and becomes an F# dim like line over the D7(b9). On the Gm7 it is in fact the original motif transposed a whole step, and the C7alt is an F# major line. Then back to F and the final C7 line is a variation from the diminished scale.

There are not really any rules, you need to practice doing this so that it fits the chords, so sometimes that means moving the whole motif, sometimes you only change a single note. It is also a matter of taste as to how much it has to sound like the chord or just be a melodic statement of course. In Example 1 I think I managed to really spell out the harmony though.

Once you can move a motif like this through the changes you probably need to work on ways to vary it so that you can get to the point where you actually create music without sounding like an exercise. There are numerous ways of molding a melodic statement, and maybe later I am going to go into a few more ways in detail. In this lesson I am going to give 3 fairly simple ways to work with it and a few more in the final example.

When you’re working on this it is probably useful to stick with the same chord in the beginning. In Example 2 I have taken the F statement from example 1 and then make variations by changing the 2nd note of the melody. When played one after the other it becomes clear how this will work as a way of creating melodies with this method:

Another way is to change the order of the notes. In example 3 I am changing the ending of the line a few times. The fact that I change the ending works well because now when you listen you first hear a part of the statement that you already know, and then it ends in a new way everytime.

The 3rd way to make variation is to change the rhythm of the original melody. Again a very powerful tool that is a very good way to get surprising melodies out of a single statement. In example 4 I am not really changing the rhythm, only putting the melody on another part of the bar. There are of course a lot of other ways to change the rhythm. There are a few in the last example.

Now that we talked a bit about how we can move a motif through changes and a few ways to vary the melodies you should be able to make solos not too far from example 5. 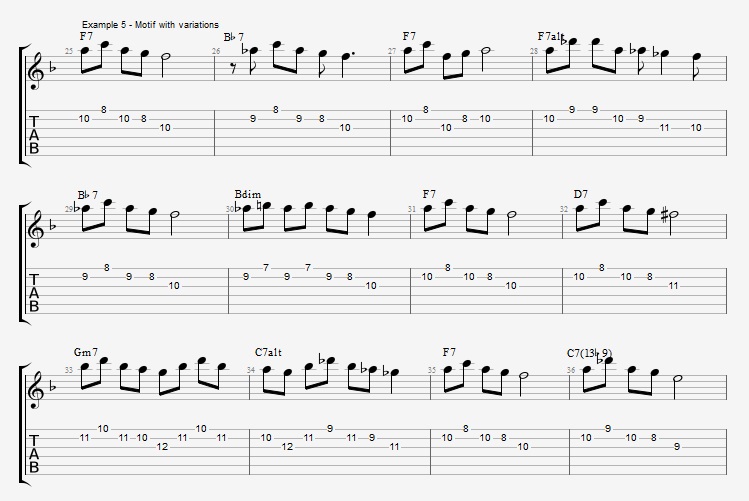 The first bar is the original statement from the Example 1 again. In Bar 2 it is moved to the Fm version that fits the Bb7 very well. It is also moved to another part of the bar. The third time is back in F major with another ending. The F7alt motif has a doubled note which also yields a new rhythm. On the Bb7 I added an F as an upbeat and the Bdim version has two notes doubled. The F7 is back to the original and the D7 is again the original altered to fit a G harmonic minor scale (which is what is being used over that D7). On The Gm7 I am doubling the entire motif and playing it twice (crossing the barline into the C7) This moves the placement of the F# line that is used over the C7alt. In the last two I return to the original and use the C7(13b9) version as I do in example 1 (this is afterall a composed example).

I hope you can use the examples and guidelines that I presented here to start using motifs in your own solo and that it will help you get closer to really create new music and not just play what you already know in your solos.

If you want to check out an example solo that I wrote with three choruses on an F blues only using the arpeggio notes I have one available for sale in my store: F Jazz Blues Etude 1 – Basic Arpeggios