Re-using chords to play other chords is an incredibly powerful tool when comping or harmonizing. Approaching it can reduce the amount of voicings you need to have in your fingers and can be a great help in having a functional vocabulary of voicings. In this lesson I am going to take 2 drop2 voicng types and show you how you can play some progressions and a chorus on Solar with just these 2 types of chords.

The idea is really simple. As you can see in example one we can cover 8 types of chords just using an m7 and an m7b5 voicing.

The idea is that we can cover m7,Maj7,Maj6,m6,m7b5,dom7th and dom7thAlt voicings and therefore we can actually play most of what you will encounter in any standard.

It is important that  you check out the two lists of root/chord  relationships:

To keep it practical I have only used the four inversions of each of the two chord types on one string set, namely the top strings. In example 2 I have written out the two sets of four inversions. First the Em7 and then the Bm7b5

If you want to check out drop2 voicings in a more detail you can do so here: http://jenslarsen.nl/jazz-chord-essentials-drop-2-voicings-part-1/ I have made quite a few articles on drop2 voicings already.

Drop2 voicings in cadences and turnarounds

When you first start putting this to use it is probably best to just take a few turnarounds and cadences to work through. This is practical because you can then easily take the progression through several inversions without having to spend hours.

In example 3 I harmonized a C major turnaround using the two drop2 voincings.

In example 4 I went through a Minor cadence in D. As you can see we can use the Em7b5, and the A7alt is again harmonized with a Gm7b5 voicing (though this time in another inversion). The Dm6 is harmonized with a Bm7b5 since B is the 6th of D minor.

Taking it through a standard.

To demonstrate that you can use this in a bigger context and that you can also use this approach to make some logical (if a bit simple) top note melodies I have harmonized a chorus of the standard Solar.

I will just quickly go over the choices for the chords, since I have covered the principle in detail above.

On the 2 bars of Cm6 I am using Am7b5 voicings moving up an inversion from the first to the second bar. The Gm7 voicing is just that. I chose to use a C7alt in the example even if that is note necessarily what the melody of Solar suggests. The C7 is harmonized with a Bbm7b5 voicing since Bb is the 7th of C. You should remember how often I have used Bbm7b5 arpeggios to spell out C7 alt chords.

The Fmaj7 is played using an Am7 voicing for the first bar and then in the second bar I chose to use an F6 (with a Dm7 voicing) which gave me the option of having a step wise ascending top note melody. The melody continues up to an Eb on the Fm7 chord and further up to F which is the top note of the Bb7(9) which is harmonized with a Dm7b5 voicing. 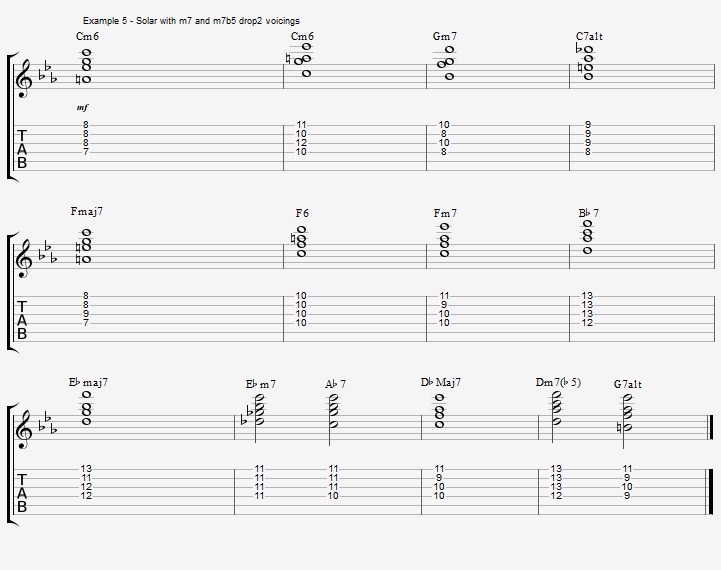 An important part of using this approach is to learn to hear the voicings in the context and to be able to think them from a certain root. I talk a bit about this in the video. When you first work on this then try to play a cadence the way you normally would play it and then try one with this harmonization so that you can hear that they work in the same way.

You will need to be able to for example think of an Am7 voicing as an Fmaj7 chord if you are using it as that in the context. If you have to add a 2 or 3 step thought process it is going to be impossible to make music with this material.

I hope you liked the idea and that you can use it to get some new chord voicings or rather some new ways of using the voicings you already know.

The lesson contains 2 choruses of All the things you are and goes over more complicated examples of top note melodies, inner voice movement and chromatic chords.

If you want to check out the examples I went over in this lesson you can download a PDF here:

Play a standard with 2 types of Drop2 chords

Please subscribe to my YouTube channel and feel free to connect with me via Instagram,Twitter Google+ or Facebook to keep up to date with new lessons, concerts and