Using triads to play jazz chords a very powerful tool. We can play a wide range of chords and they are very easy to add notes to or change notes to give us the extensions or alterations we want.

Finding triads for each chord

Take a look at these these Cmaj7 voicings which are all an E minor triad over a C bass note.

So if we take the Cmaj7: We get these notes: C E G B so that’s a C and an E minor triad, and we can use it like that when we are comping or soloing.

Now take a look at the diatonic chords in C major:

So if you want to play the chord but not the root, you can use the triad from the 3rd. Using this concept we have these triads to play in C major:

So if you know how a chord is constructed it is easy to figure out what triad you can use to play that chord. There’s another concept that is closely related to this which is called upper-structure triads. The idea behind this is that you use a triad as the extension part of a chord to have a strong sounding voicing or melody, but that’s a little more complicated theoretically and for another lesson.

The advantage to this approach it is an easy way to play rootless chords and fever notes makes it more flexible for adding notes and making melodies within the chords.

The basic exercise you need for this is to learn the triads in inversions on every set of three strings. When using them as chords I play them 90% of the time on the two top sets, but since triads are such a basic resource that you need for soloing as well as chords I’ve chosen to demonstrate all three types of triads that are found in the major scale on all string sets: 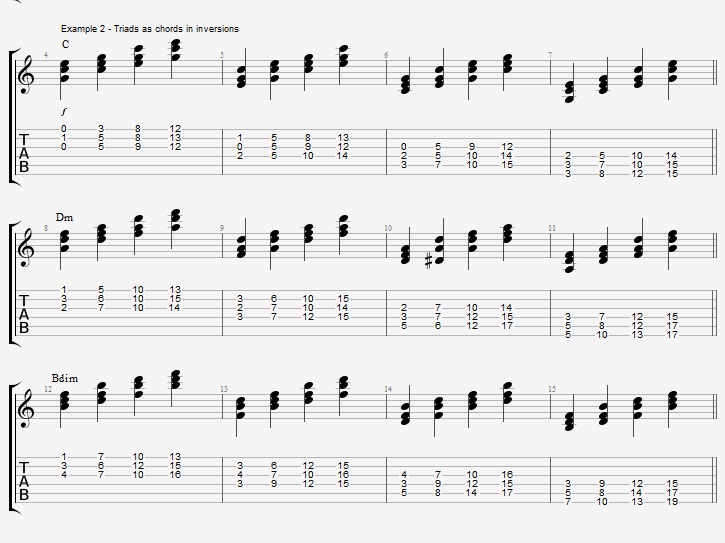 Of course you can make a lot more exercises with the triads, playing them in scales and different voiceleading or melodic ideas but for now I just cover the basics. You should check it out in diatonic situations, and work it through songs since triads are one of the fundamental building blocks in most kinds of music.

George van Eps has written a lot of exercises with triads in his books everything with fingerings and in all keys, worthwhile checking out and practicing from.

Adding extensions and alterations to the jazz chords

To make this approach work we also need to have a way to deal with altered dominants. For that I use the approach that I also talked about in my lesson on diatonic arpeggios: Altered chords and superimposing Namely taking the upper part of the tritone substitute and used that on an altered dominant.

Another way to say that is: Altered dominants: use the dim chord from the 7th degree: G7alt: F dim: F Ab B which is 7,b9,3rd

You can use some of the same substitution rules as I explained in on of the drop2 lessons, so
13 instead of 5 (example: G7/Bdim), b5 instead of 5 and to make a sus4 chord you can suspend the 3rd with the 4th. 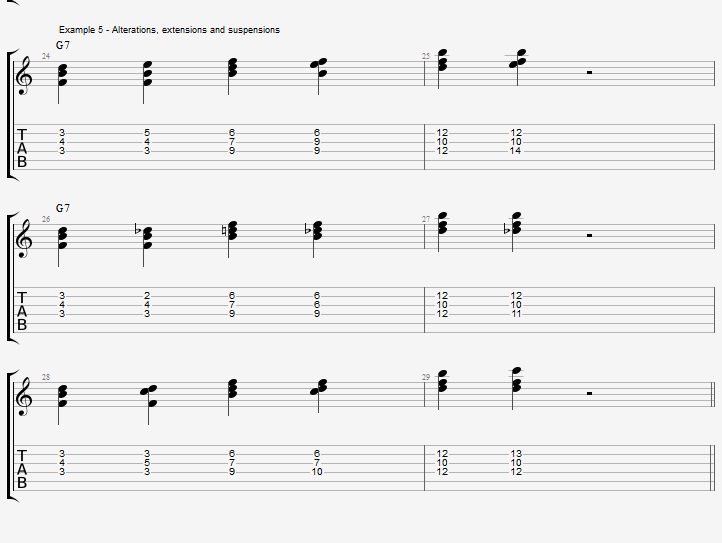 For minor chords: 11th instead of 5th or #11 instead of 5 on major 7th chords (you could also see that as a sus4 triad in inversion being used over a C bass note, but since I did not talk about sus4 triads and inversions I won’t go furter into that. The last example is how to replace the 7th with the 6th. 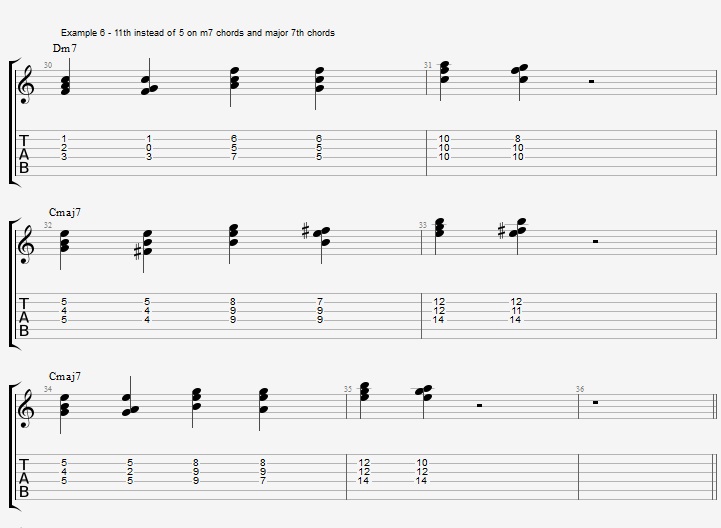 Putting it to use

Just so you get an idea about how I incorporate it, here’s an example over a trusted old I IV II V with altered dominants: Dm7 G7alt Cmaj7 A7alt

You might notice that I am trying to play with the different voices within the chords because the triad approach lends itself to this very well. 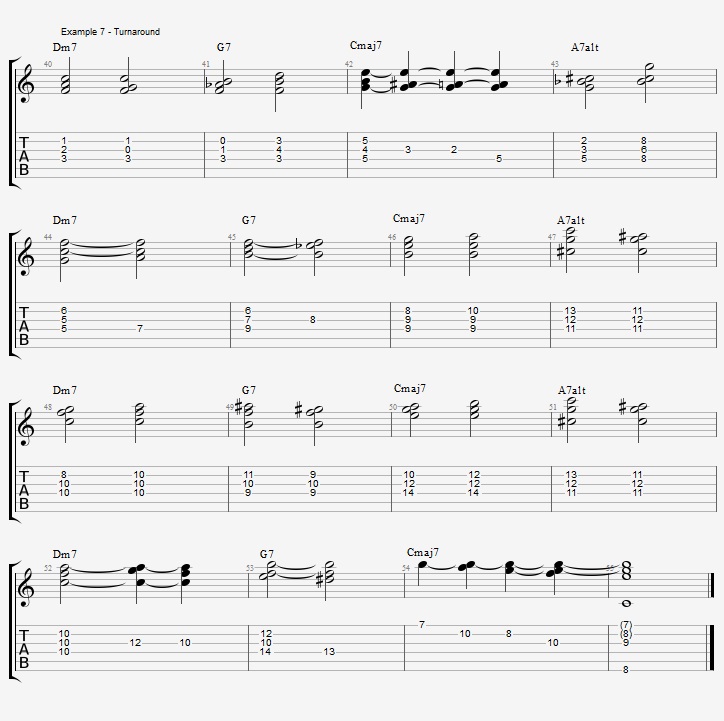 I hope you can use the material and the ideas I went over here to start using Triads in your own comping and chord melody playing. As I already mentioned it is something that I use really a lot because it is flexible and lends it self well to most situations.

If you want some more examples of how I use triad based voicings in the context of a standard you can check out the lesson here below:

Comping Etude – How High The Moon