In my previous lesson on playing this sort of accompaniment: Chords and Walking Bass – part 1 I mostly talked about how to combine the two and how to practice getting both layers to work together. In this lesson I am more focusing on how to write the basslines for faster moving chord progressions like a rhythm change A part.

The main part of this lesson is based on the two examples that I play in the video which should demonstrate a simple and a more advanced approach to creating a strong bass line.

In the first example I am mainly using a 1 – 5 movement to construct a logical sounding bass line on the Rhythm changes. Just to clarify what I mean: 1 – 5 on the Bb would be Bb(1) and the next note would be F(5).

In the first two bars the bassline is only constructed of a 1 – 5 movement on all chords. On all of them I can resolve that down wards to the next root except for the Bb (Bb – F) that is resolved up to G. For the next two bars I play a Dm instead of the Bb chord. A very common thing to do, since the two are almost identical. The bass line is again moving 1 – 5 all the time except for on the Dm where it is 1 b5, yielding a chromatic leading note to the G7. This is also a very common way to move from one chord to the next.

On the Fm7 I use the 1 – 5 bass line again to get to Bb. On the Bb I go from the root to the 3rd because it is leading into a chromatic ascending movement (Eb to E resolving to F). The Eb and the E are played with repeating notes because that emphasizes that sort of movement. The resolution to F (on Bb/F) is chromatically moving up to the G, which then via its fifth(D) moves to C. The bassline on C is a b5 leading down to F, and on the F I play the 3rd to go to the Bb on beat one of the next A part. 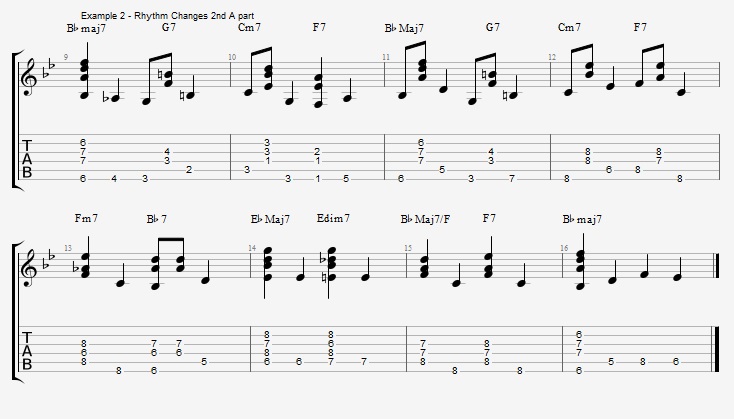 The second example employs a few other approaches too. The first turnaround uses a chromatic leading note Ab to lead to G. In a slower tempo you can even harmonize it as an Ab7. Form the G it moves via the 3rd(B) to C minor where the bassline on the Cm7 F7 is purely chord tones. The 2nd Bb Major moves via it’s 3rd(D) to G. This is in a way using that the D is a chord note on the Bb and the fifth of G so it makes sense harmonically and is a nice way to get a bigger interval in the bass line at that point. The Cm7 F 7 is again using thirds and fifths as leading notes. The solution for the Fm7 Bb7 EbMaj7 Edim is identical to example one. Mostly because the chromatic ascending line is so strong at that point. On the last two bars I uses the F and the C under both the Bb/F and the F7. On the Bbmaj7 the bassline is the triad ending on an Eb to lead to the D7 in the bridge.

Putting this to use

I hope you can use these examples as models to make your own bass lines. For me the process with this was always based on finding some solutions for the different progressions in a piece and then practice to play them and hopefully have a few different ones so you can start varying. Over time the ability to get more variation in both chords and bass lines should grow.