Taste and Theory, Analysis and Association

Everybody has standard licks or lines that we play all the time. Stuff we’ve practiced and transcribed and that is already in our ears and fingers.

To make these variations we need to analyze the material that is used in the lines and then use that information to replace parts with other things that we already practiced. The analysis is of course not strictly systematical or following a set of rules but just as much based on association and taste so what you end up with is depending on that more than anything else. This means that it is handy to be able to associate for example as many arpeggios as possible with a certain chord, and to be able to see a phrase in several contexts. This should be clear from the examples.

I would suggest you check out these lessons for reference on how to practice some of the building blocks I mention in terms of stacks of 4ths, arpeggios and scales. This should make it easier to have a wide range of options for replacing parts of a line.

I will approach this from some examples that I analyze and then generate new lines from them.

In my examples I have a one bar lick that I’d use on  Am7 in a G major context. The other bars are the variations I make by moving it around diatonically.

If I was to analyze the line I’d see it as the diatonic arpeggio from the 5th of the chord (so that would be Em7 in this case) and followed by an intervallic structure or a pentatonic fragment from the 3rd(C) of the chord.

As you might already know you can try diatonically transpose a line and if you choose to do so in 3rds you have a fairly big chance that you will end up with something that fits the same chord. In this case we could start by moving the same line to C, so we’ll start with the arpeggio on a C which gives us a Cmaj7 arpeggio (bars 2 and 3).

As for the second half of the line for me there are two obvious options. If you see it as amelody in G and transpose it like that you get the notes A, B, C and E (bar 2) or as part of a pentatonic scale you could get the notes A C D and E (bar 3). Notice how is makes a difference how we interpret the line (even if it is subtle in this example)

In the rest of the examples I move the line around in the key of G and it yields lines that then works well with other chords like D7 or Gmaj7. In each case there are a few options in terms of how it sounds good to move the last part of the line.

In the first example I only transposed the line, but since we identify the lines as conisisting of building blocks and that those are in a context we can also take the building block and replace it with something else that will fit in it’s place.

Let’s replace the first part. I chose to stay close to the original and wanted to use a structure that ends on a G so it moves smoothly to the next part of the line, but of course that is not something you have to do, and you could also take something that ends of for example an E to lead to the D major triad inversion. 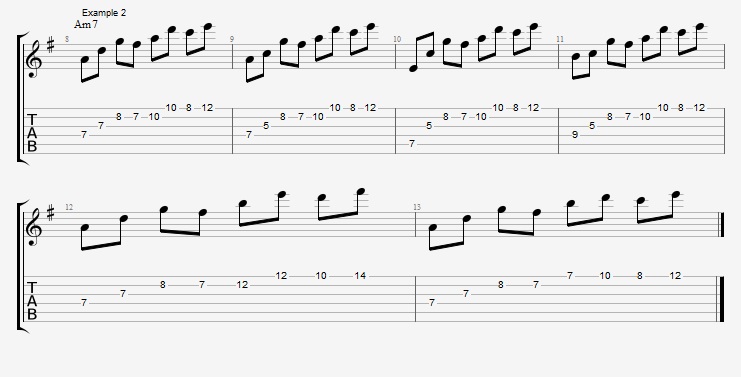 As you can probably already see there are an almost endless amount of options available when working like this. In my examples I deliberately chose to stay a bit close to the original, but more variation is fairly esay to achieve using this method, and it is a good way to get good sounding lines that should be fairly easy to play. This is also a very good way to find a musical way to apply stuff that you have practice like a new sort of arpeggio, inversion or scale.

I hope you can use this approach to come up with some new stuff, and hopefully also use it when applying new ideas like arpeggio inversions in a musical way.

Get more out of the licks you already know