In this 3rd lesson on Drop2 voicings I am going to go over altered dominants and show some more versions of how you add extensions to chords. I will of course also give some example of how you put it to use in cadences and on a standard.

The examples in this lesson are all in the key of G major (except the last example which is an excerpt from a standard in Gm). I chose to keep it simple and only work with the top set of strings. In the long run it can be very useful to also check out the middle set of strings and possibly the lowest set. A complete overview of the drop2 voicings can be found here: Scale charts and chord voicings

The first we are going to go over is how to create an m7(9,11) voicing that we can use as for example a II chord in a cadence.

From the 2nd lesson: Jazz Chord Essentials – Drop 2 voicings – Part 2 we have a list that I now want to add a rule to:

There is one more rule that we can use to make some more voicings, but I’ll save that for a later lesson, it is also making things a bit spacy and hard to play..

In example 1 I have first listed the basic Am7 voicings on the top four strings and then how I construct an Am7(9,11) by substituting the 5th(E) witht the 11th(D) and the root(A) with the 9th(B).

So now we have constructed a 7(9,11) chord, let’s have a look at altered dominants!

There are of course many ways to construct or think about an altered dominant, since I started out with demonstrating 4 basic chord types (m7,dom7th,maj7th and m7b5) I want to show how you can use one of these as a voicing for altered dominants.

The reasoning is similar to a lot of other lessons.

If we have an Ab7(9) chord we would play that with the m7b5 voicing from the 3rd of the chord, so that would be Cm7b5.

As you may know the tritone substitue of Ab7 is D7, so the share the 3rd and 7th.

If I write out a Cm7b5 in a not entirely enharmonical correct way it looks like this:

Example 2 is showing how D7alt and Ab7 are also very similar as voicings and how that is visible on the neck by only changing the root.

In example 3 I am first using Cm7b5 voicings as D7b9b13 and then showing how we can substitute the Eb with an F to create D7b13#9 chords.

The rule that you should remember (for now) is that you can play an altered dominant by using the m7b5 chord on the 7th of that dominant (so Cm7b5 for D7alt, Fm7b5 for G7alt etc…) When you start using it you will probably quickly start to just think of it as a altered dom7th chord, which is of course also the idea.

To also have a bit of variation available on the tonic chord in the cadence I have  aplied the same rule to the Gmaj7(9) chords. As you may remember I used a Bm7 drop2 voicing to play these and in this voicing we can replace the 5th(D) with a #11(C#). This gives us a lydian sound on the tonic chord which is maybe not strictly in the key but it is a bit a nice and fairly common variation.

The voicings are shown in example 4, first the standard Gmaj7(9) and then the derived #11 voicings.

The II Valt I cadences

With the 3 new voicing types we can make a new set of 4 cadences as shown in example 5. 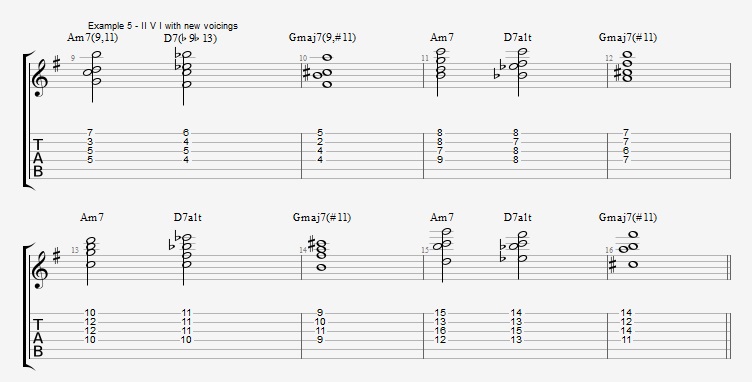 It might be wise to also practice these just resolving to the maj7(9) chords because the #11 doesn’t always fit the with what is going on in the song.

As I did in the previous 2 lessons I applied some of the voicings that I discussed on the first 16 bars of Autumn Leaves. This is shown in example 6: 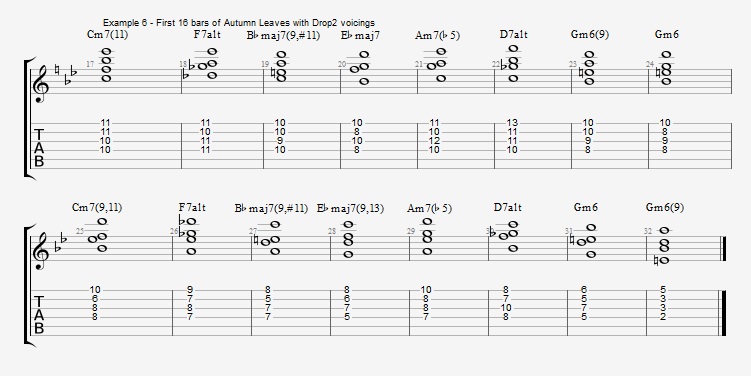 I start out with a Cm7(11). In this vocing I chose not to add the 9th instead of the root. This is because it would be as the lowest note in the chord and in this place I don’t think that sounds too good. The F7alt is played using an Ebm7(b5) voicing this resolves to aBbmaj7th(9,#11) voicing constructed as in example 4. The Ebmaj7 is a straight Ebmaj7(9) (or what you might call a Gm7) voicing.

The Am7b5 is also just using that voicing. The D7 is played with a D7(#9,b13) voicing  out of the second half of example 3. The two bars of Gm are played with first a Gm6/9 voicing and then the same voicing but without the 9th.

The 2nd 8 bars start with a Cm7(9,11) voicing in the 8th fret. It then continues to an F7alt voicing and a Bbmaj7(9,#11) voicing. This cadence is a Bb version of the first bars of example 5. The Ebmaj7 is played with a Gm7 voicing, but I substituted the Bb with a C so that the sound is an Ebmaj7(13) sound.

This moves nicely up to an Am7b5(11). This voicing is with the 11th replaceing the 3rd, but in the context you still have the sound of the chord. The D7alt is again played with a D7(#)b13) voicing now in the 8th fret, and this resolves to a Gm6 and Gm6/9 voicings in the final bars.

I hope you can use the exercises to expand your Drop2 voicing repertoire and come up with some nice new chord voicings for the music you play.

As always you can download the examples as a PDF here:

Check out how I use Drop2 voicings in this 3 chorus transcription/lesson:

Drop2 voicings on There will never be another you