After making the triad lesson I thought I might as well make a lesson on open triads because I use them sometimes as chords and sometimes as arpeggios. I think they can sound great and it is a subject that is not covered that often so it deserved a bit of attention. I guess I’ll do a lesson on how to use them as arpeggios in solos at a later time.

I never really checked them out in any systematical way so making this lesson I found quite a few new voicings to experiment with.

What is an open triad? Probably some of the most famous examples of open triads on the guitar would be Eric Johnson intro to Cliffs of Dover, Steve Morse string skipping etudes, and a lot of the guitar parts of the Californication-era Red Hot Chili Peppers. They all apply them as triads, but I am going to use them in the same way I approached the triads in my lesson on that.

Here’s an example on how to construct open triads from triad inversions. As you can see the idea is to take the 2nd note of the triad and drop it an octave. This is also sometimes referred to as a drop2 voicing, which I already covered with 7th chords in a few other lessons.

Here are the 3 of the basic sort of triads, the ones found in the major scale. I leave out the augmented triad because it is less useful as an upper structure except when playing minorMajor7 chords and since it is symmetrical it is fairly easy to figure out (This is where you go “Challenge accepted!”)

As I mention in the video, there are a few possible choices when choosing where to place the notes on the neck, to me it varies what I prefer and I try to use whatever fits the situation best. That might be influenced by voice-leading, technique and timbre of the strings. 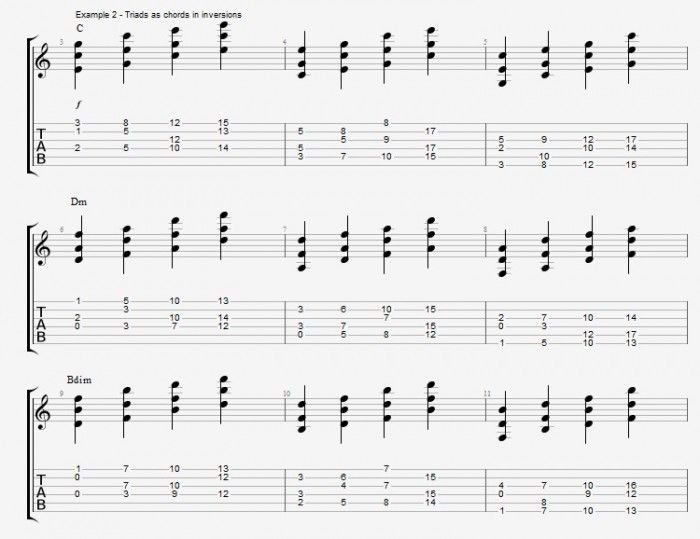 Here are some basic Cadences constructed with the triad found on the 3rd of each chord: II V I in C using F, Bdim, Em. Of course it is possible to use all string sets, but I find myself using the middle and the top set the most for these voicings so here’s the middle one. You should try to do the top one your self, that’s a good exercise.

And if you want to play altered dom7th chords then you can use the diminished triad on the 7th degree of the chord so for G7 that would be F dim: F Ab B which gives you these notes over G7: 7, b9 and 3, so the equivalent of a G7b9.

Altering notes in the triad

In order to cover more chords we can start moving away from only viewing the triad as a triad but more as a set of notes over another chord so we can start altering that chord. To me it is handy to have a simple way to construct basic 3 note voicings I can use for any chord type and then it is easier to alter one of the notes while playing becuase there are only three and I know what notes they are in relation to the chord. The way I approach this is the same as what I did in this lesson on drop2 voicings of 7th chords: Drop2 voicins part 2

Here are a few examples:

G7#5 is in this case constructed by taking a Bdim triad and exchanging the D with a D#. Thinking of this in terms of notes over a G7 this is pretty trivial, but thinking of it as a Bmajorb5 triad is complicated.

In the next example I am taking the F dim construction and exchange the b9 with a #9 to play G7#9.

Here’s the same approach using an F major triad where I substitute the fifth(A) with the 11th(G) to have a Dm7(11) chord voicing.

In the same way we can construct a Cmaj7(#11) voicing by changing the G in the Em triad with an F#. so we are playing the notes E F# and B over the C, in a way you could look at that as a Bsus4 triad too.

In this next example I am substituting the 7th(B) of the Cmaj7 with the 6th(A), still using the E minor triad as a starting point.

Of course there more options and things to figure out using these open triads. Actually I got some new info from writing this lesson since I never approached this in a systematical way, so maybe I can make another one later.