Using Melodic minor and it’s modes is an important part of the modern jazz guitar sound. In this video I am going to analyse a solo on the jazz standards Solar that I improvised and transcribed. The solo should give you some ideas on what arpeggios and structures I use when I am playing and help you get more confident using melodic minor and tritone substitutions.

In the video I will be giving some examples of alternative arpeggios besides the ones I am playing in the solo, so for that reason it is worth while checking out the video.

Solar is often attributed to Miles Davis, but there it is likely that he did not in fact write the song and that it is in fact a composition by Chuck Wayne. This is also mentioned in this wikipedia article

The form of Solar is 12 bars. It is a reharmonization of a 12 bar blues in C minor. The first four bars are clearly reminiscent of a blues moving from the I to the IV. Very often these four bars are also played as four bars of C minor. The IV is then here substituted for a maj7 chord, and use a pattern of II V I cadences where the I is turned into a II chord by making it a minor chord. A similar idea to what happens in for example How High The Moon. 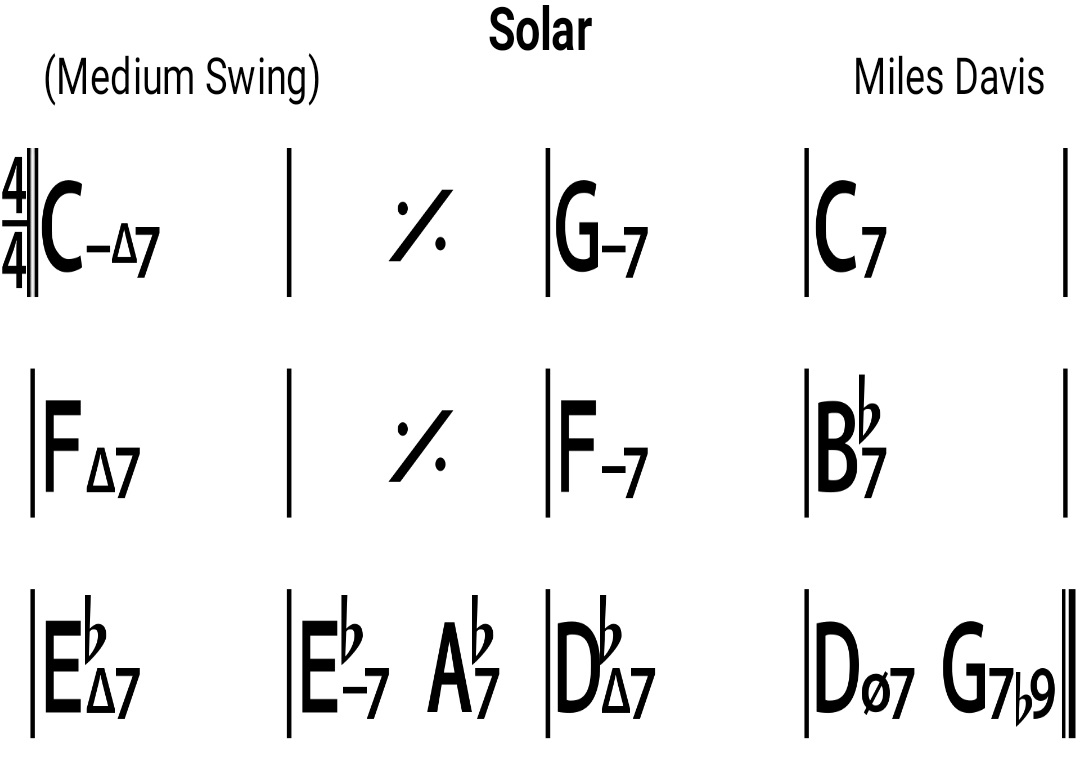 The melody of Solar clearly uses melodic minor on the I chord, and this makes it a great place to start using tonic melodic minor.

Tonic melodic minor and the cadence to the 4th degree.

The opening line is constructed from two versions of the arpeggio from the 3rd of CmMaj: Ebmaj(#5) In the lower octave it is played as a triplet with a leading note. From there it continues up the scale and then plays another Ebmaj(#5) arpeggio. From there it continues down a structure that you could call an F lydian arpeggio (5 #4 3 1, which is a term coined by Rick Beato). It then ends on the maj6th of the CmMaj which is then also the 9th(A) of Gm7.

For the cadence to Fmaj7 two concepts are being used: A quick trill with a chromatic approach and a line on the C7 drawing from the diminished scale.

The line on the Gm7 is also using the arpeggio from the third. On the Gm7 that is a Bbmaj7 which is played as a descending sweep. From there the line continues with a trill on the A and the Bb which then is used as part of an encircling of the 5th(G) of C.

The C7 is given a C7(13b9) color which is mostly associated to the diminished scale. In this case it starts out with a scale run that could just as easily have been from the normal F major scale, but then via an A major triad (in 2nd inversion) turns into  a C7(13b9). The A major triad is a great way to pull out that sound since it combines the 13 and the b9.

The line ends on the 3&, a typical Bebop phraing habit.

For medium tempos the 8th note triplets are a great way to vary the flow of 8th notes. Your playing will benefit greatly from checking this out. If you want to hear great examples of this then check out mid 60’s Herbie Hancock or some of the more recent Kurt Rosenwinkel stuff.

In this example I am using triplets in groups of four. Since this is an improvised solo the way I use it is more loose and I don’t play complete bars or start clearly on the one. The idea is however still clearly groups of for notes. Since triplets naturally fall in groups of three then grouping them in fours will create a nice shifting rhythm on top of the original groove. In the solo I start on the 3rd triplet of the bar, but if you watch the video I also demonstrate how it would sound if you started it on the one with the same pattern. The four note pattern is an Abmaj7 shell voicing (three notes) followed by an 8th note triplet rest.

The Bb7 line is using tritone substitution. In this case it is done very clearly since the line consists purely of an E7 arpeggio played in a skipping pattern.  The line is pulled into the Ebmaj7 bar and the resolution is deayed until the 1&.

Using the diatonic arpeggio of the VI degree

On the Ebmaj7  the material used is essentially a Cm7 arpeggio decorated with an extra D. Using the VI arpeggio over a tonic chord is a good resource and will mostly work really well. The Cm7 arpeggio is of course also in fact an Eb6 arpeggio.

On the II V I to Db major I am using the exact same arpeggio as I did on Ebmaj7, except that I am moving it up to Ebm7. The line is pretty basic and the only really interesting thing is probably that it is clearly ignoring the Ab7. To me this place in the song is served better by ignoring the Ab and then focusing on the Ebmaj7 -> Ebm7 change. As you shall see in the next cadence I don’t have strict rules about which chord to ignore in a quick II V like this one. It is context sensitive what you consider more important.

On the Dbmaj7 the line is using an Fm pentatonic scale. Using the pentatonic scale from the 3rd of the chord is a personal favorite of mine. I find that it is a great way to bring out the important colors over the maj7 chord and it is easy to use it to start pulling out some of the quartal arpeggio sounds as well.

In the final II V I am ignoring the II chord. This feels more natural because the point of the cadence is that it wants to pull us back to the I chord at the top of the next chorus. This is an important function and (obviously?) the dom7th chord carries most of that which is why I don’t really play the II chord.

The line is using a trill on G and from there continues down an AbmMaj7 arpeggio that is then resolved to the 9th(D) of CmMaj7.

Try it out on my backing track

If you want to check out how all these concepts and ideas work you can do so on my backing track: Solar 141 bpm

If you would like to check out the 2nd chorus you can do so via my Patreon page. You will get access to the 2nd chorus, the lesson discussing it and a lot of other extras with a pledge of $3 for each Thursday YouTube Lesson. You can have a look here: Jens Larsen on Patreon

I have a small but deidcated community on Patreon that supports me in making all the jazz videos and it is a great way for me to give something back for the support!