In this lesson I will go through what a minor blues is in Jazz and show some chords so that you can play through it and improvise while doing so. It is also a demonstration of how to apply the material from my lessons on Quartal harmony and Triads

All the examples I am working on in this lesson are based on a minor blues in the key of C. You can see the basic progression in example 1 here: 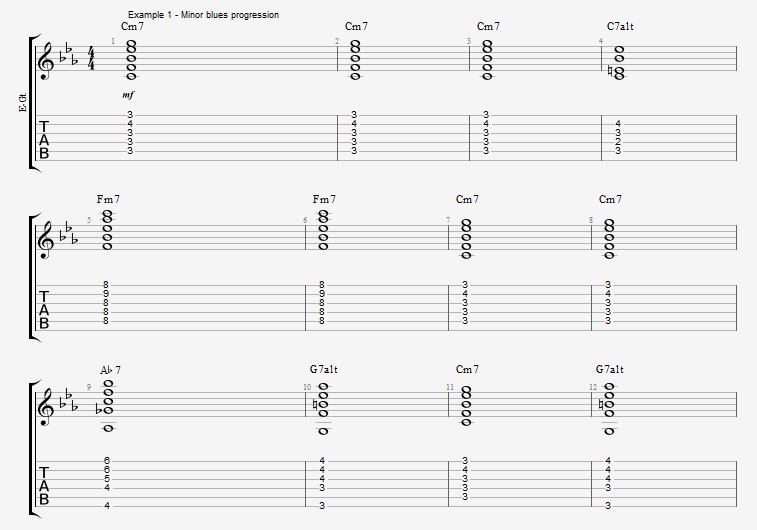 You’ll probably notice that it is very similar to the major blues progression, but that there are a few differences:  There is no IV chord in bar 2, and the ending cadence is not a IIm7b5 V (Dm7b5 G7)but uses a tritone dominant of the V (Ab7 G7). The reason for the dominant might very well be that that chord includes the blue note in the key of C (F#) and it is also a fairly normal progression in minor. In general there are fewer cadences and the structure is a little more basic. I don’t actually know why, but I think it has to do with the fact that the minor blues became popular in a period of jazz where modal playing was being explored more than playing over functional harmony and therefore players preferred to have one chord for longer periods. Of course that is just a theory..

A few voicings for each chord

In example two I run demonstrate a few voicings for each chord that are placed on the neck so that it should be fairly easy tro make melodies with them. 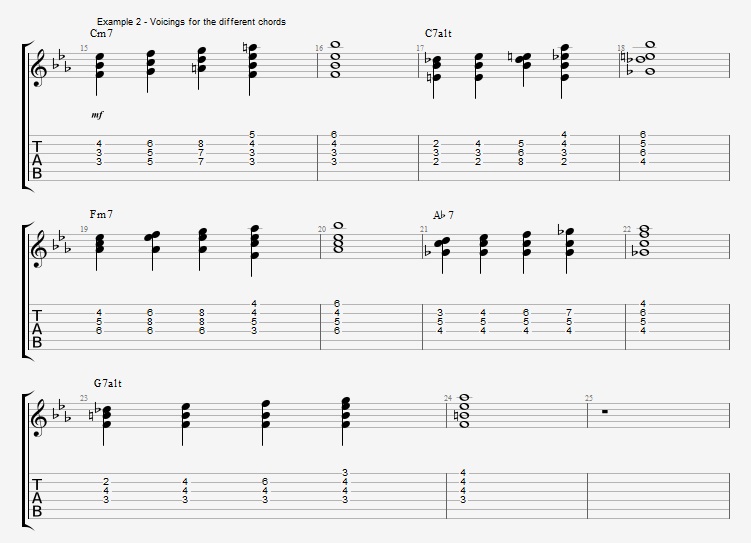 On the Cm7 chord. I chose to use a Cm7 Dorian sound, since the modal aspect of the minor blues lends itself very well to that. You can of course also approach it from a melodic minor angel, but that will be for another lesson. The voicings I chose over the Cm7 are all quartal harmony or derived from that. If you want to check more on that you can look at this lesson: Jazz Chord Essentials: 3 part Quartal Harmony

The C7alt voicings are from the Db melodic minor scale. You might notice that I am using Stacks of 4ths, triads and drop2 voicings on it. In the end you want to mix up all the different kind of voicings that you study, this is a good example of it.

I use triads and drop2 voicings to play the Fm7. This is mostly because I want to stay in the same register and place on the neck so that it is easier to make a logical connection between the chords on the C and on the F, and the quartal voicings for F are easier to play somewhere else.

Both the Ab7(#11) and G7alt are constructed from a shell voicing with different notes above it. The Ab7 chord is a lydian dominant which you can read more about here: Lydian dominants. Basically the Ab7 is the tritone substitute of D7, and the scale that you use to take extensions from is Eb melodic minor. The G7alt is in the same way constructed by adding notes from the G altered scale (which is the same notes as Ab melodic minor)  this gives you G7 with extensions like b5, b13 and b9.

In this last example I am playing an etude that I wrote as an example of how I might comp through a chorus on a C minor blues. 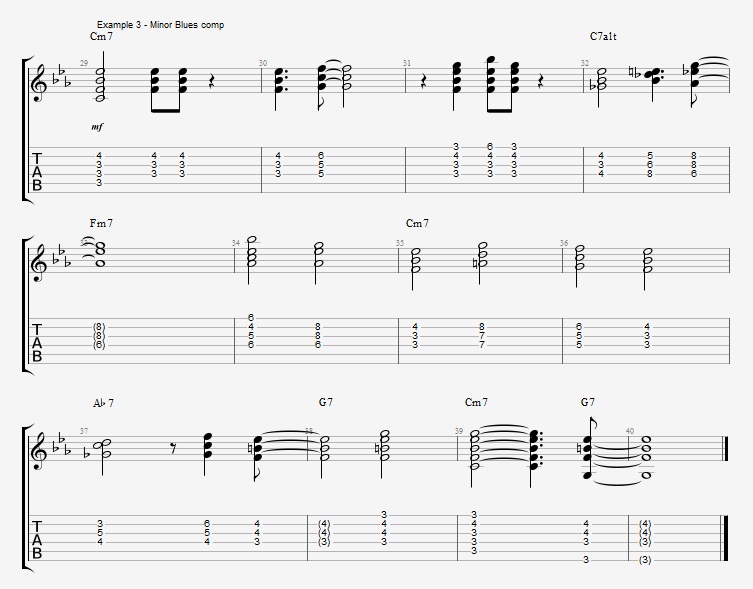 The first 3 bars are essential small rhythmical motives with stacks of fourths, here the focus is more on creating rhythmical movement than melodical movement.  That’s why the chords are repeated and often not sustained. On the first Cm7 chord I added the root, something that works well as a sort of resolution, playing a heavy root or even power chord on the one of a four bar period. McCoy Tyner did this very often and is something that I associate with the style of that period.

On the C7alt I play a stack of 4ths followed by a Bbdim triad which resolves to the Fm9 which is anticipated on the 4& in bar 4. I play an Fm11 and an Fm9 to get back to the Cm7 stack of 4ths in bar 7. The movement in bar 7-9 is an example of more emphazis on the melody than on the rhythm since the chords are being played sustained, on the beat and with a clear direction towards the Ab7(b5) on the 1 of bar 9. Then in bar 9-10 the rhythm becomes more important and the chords shorter  moving from Ab7 to G7. The last two chords are both sustained and I include the root to get the McCoy effect that I mentioned earlier.

I hope you can use the material I presented here to make up your own comping patterns and hopefully some perspective on how to use some of the material I have gone over in previous lessons.

You can as always download the pdf of the examples here:

If you want to check out an example for comping on an F blues I wrote a lesson with two choruses using different types of voicings. It is available for sale in my store: F Blues Comping Etude #1