In this lesson I want to demonstrate how you can use different pentatonic scales on a major II V, what kind of sounds and melodies it gives you and how I use that in solo lines.

All the examples in this lesson are made on this II V I in Bb Major. Since I already made this lesson on what scales you can use over the I chord: Pentatonics Part 1 – Maj7 Chords I am not going to spend too much time on that.

I am also assuming that you have checked out pentatonic scales in different positions and keys, so I won’t go into that part of the technique involved.

In a major scale you have 3 diatonic minor pentatonic scales (You can try to build them if this is news to you, that’s a really good exercise for theory and getting an overview of the scales). The scales are on the II, III and VI degree of the scale, so in Bb that gives us C minor, D minor adn G minor pentatonic.

For the II chord in the progression I have chosen these two scales: C minor and G minor. C minor is fairly obvious since it is the Cm7 arpeggio with an added 11. The G minor scale is the same notes as the C minor except it has a D instead of an Eb.

You can also use the Dminor pentatonic scale on a Cm7 chord, but in this progression where the chords are moving quite fast and has a direction the A in the D minor scale is not so easy to use and I have therefore decided to omit it. In a modal situation where you have a Cm sound for a longer period of time it can work fine.

The V chord has 2 obvious options in the C minor pentatonic and the D minor pentatonic. The C min yields a sort of a F7sus4 sound, but it will work on a normal F7 as well. D minor pentatonic is also F major pentatonic so that will for that reason work just fine. I have omitted the Gm scale because it does not contain the A and the Eb which is the core of the F7 in this example. 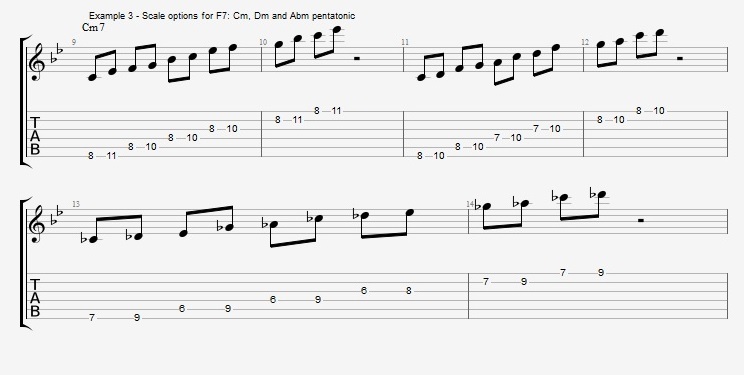 T he third option, Abm pentatonic works as an F7alt sound. F7 altered is F# or Gb melodic minor and the only pentatonic scale contained in that is Ab pentatonic. Which also happens to be the major pentatonic scale of B, the tritone substitution of F.

Part of what I find useful about using pentatonic scales like this is that the melodies you get when you improvise with them are not the typical hardbop vocabulary consisiting almost only of 2nds and 3rds. In that way it is a nice change from other ways to come up with lines.

The first example is using the Cm pentatonic on the Cm7 chord and the Dm7 on the F7 chord.

On the Cm it starts with an Eb major triad and moves on to a stack of 4ths, which is infact also a Diatonic chord of the Pentatonic Scale. On the F7 I play a melody which is almost a sequence of 4 notes in the scale before resolving to the 5th(F) of Bb.

In the 2nd example the Cm line is pretty much a run down the C minor pentatonic. On the F7alt it is first an Abm7 arpeggio followed by a four note scale run resolving to the 5th of BbMaj7. The Cm7 line and the last part of the F7 alt line is a good example of how a pentatonic scale run in this context  will work as a melody because it is not placed in it’s “normal” surroundings.

A very nice “counterpoint” trick you can apply to a II V I with pentatonics is that you can have chromatically ascending scales over the chords which sound like they are somehow resolving down. In this case you’d get the following scales: Cm7 (Gm) F7alt (Abm) Bbmaj7 (Am). I use this kind of thinking often when I am trying to use pentatonics because you can often make scales move in other ways than the chord and it can be a good effect in the melody.

It opens up with a stack of fourths which (to me) has sort of an Allan Holdworth flavour to it, maybe because of the string skipping and wide intervals. It then descends down the scale. On the F7alt I am again using the Abm pentatonic. The line starts with an Abm7 arpeggio and then moves on to a Gbsus triad. The Abm is resolved to an Am pentatonic line on the BbMaj7. The first part of that line is a standard “thirds” exercise in the pentatonic scale followed by an Am7 arpeggio before it ends on a D.

I hope you can use some of the ideas that I went through here to make your own lines, and maybe get some more mileage out of some lines you thought you’d stopped using.