In this lesson I want to show you how you might apply the material I made in previous lessons on pentatonic scales on a jazz standard and use that approach to play the whole thing.

In my two previous lessons on Pentatonic scales in jazz:  Pentatonics Part 1 – Maj7 Chords
and Pentatonics part 2 – II V progressions I discussed how to apply the scales to different types of jazz chords.

The focus in this lesson is to apply that information to play through the progression of the Tadd Dameron composition “Lady Bird” only using pentatonic scales.

First make sure that you know all 5 positions of the pentatonic scale, since you’ll need them to be able to play the song in one position.  Here they are in the key of E minor:

You can also download a scale chart here: http://bit.ly/PDFdownloads

I chose Lady Bird partly because it is only 16 bars and also because it has a fairly simple set of chords so most progressions are neatly II V movements and therefore easy to apply pentatonic scales to. With a more complex progression it is still possible but a little more demanding. I might try to do that in a later lesson.

Let’s first go over the progression. In example 2 it’s written out with basic voicings. It is probably a good idea to play through it and get used to the sound of the chords if you are not familiar with the song. 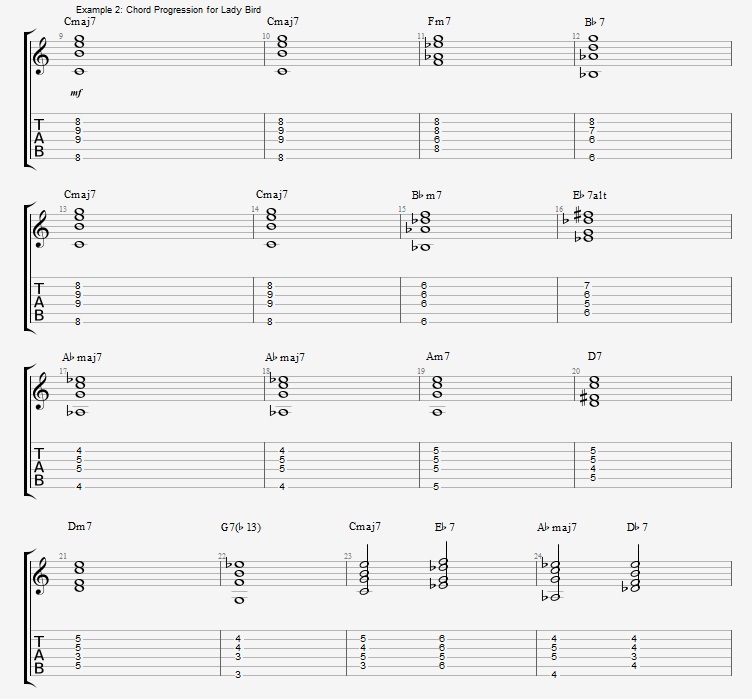 To sum it up Lady Bird is a song in C major. It moves to the IVminor sound twice: Fm7-Bb7 and With a cadence to AbMaj.  From there on it moves to the dominant of the dominant (Am7 D7) and then to a II V (Dm7 G7). The turnaround is often used in other songs as well and is actually referred to as the Lady Bird turnaround. It can also be seen as a possible stepping stone towards Giant Steps.

Now that  we have the progression we can start adding scales to it. In general I’ve chosen the simplest and obvious choices so that you can still hear the harmony.

In the turnaround I use E minor on the CMaj7 chord, Bb minor on the Eb7 C minor on the Ab chord and Bb minor on the Db7 chord. The only choice that needs a bit of explanation in this case is on the Eb7. It seems (to me anyway) better to have a different scale for each chord in the turnaround and since the Eb7 is not altered the logical choice would be C minor, but since I am using that on the AbMaj7 too I chose to play the Bbm scale which is actually an Eb7sus4, but works well in the context. 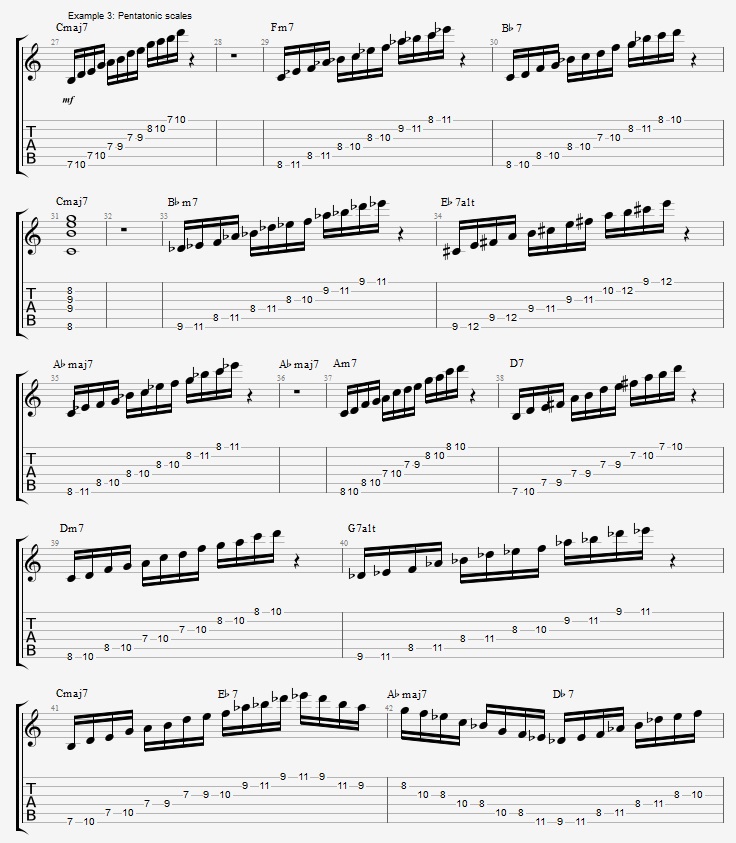 In example 3 you’ll see how I used the 5 positions to lay out all scales around the 7th position which gives you a good way to improvise and get from one chord to the next in a logical way. That is what I am trying to do when I play the solo.

I hope you can use the scales on standards or other progressions as a way to expand the melodic material you can pull from in a solo.