There seems to be some confusion about what avoid notes and what target notes are when it comes to improvisation even mixing them up, so I thought it would be a good idea to show you which one is incredibly useful and which one really isn’t, because in a way, they are the opposite of each other.

When I was starting to learn Jazz, I was taught both along the way, and for me, one helped me build an essential skill for Jazz while the other one was something that I knew but it never really made any sense to me.

Usually, avoid notes are defined as the notes that create tension against the underlying chord. So the most common example would be playing an F over a Cmaj7 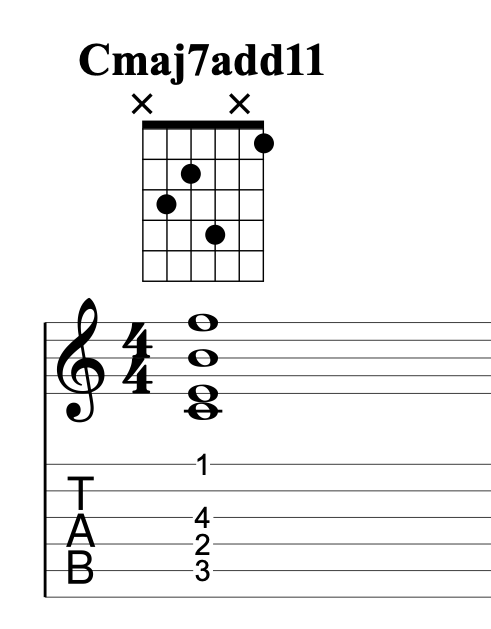 Here the F and the E and also the F and B clashes quite a bit.

But really any note that creates tension would be an avoid note.

It is probably clear that I don’t think in avoid-notes and thinking about avoid-notes is very useful. The reasons for this are quite simple when it comes to improving your playing. There are some essential things missing:

#1 It doesn’t tell you anything about what to play.

If you take the common example F as an avoid note over a Cmaj7 chord, then the only thing that tells you is to NOT play an F, which is not really useful information when you want to solo. You are much better off thinking about what you SHOULD play. You also don’t drive a car thinking about NOT hitting something. 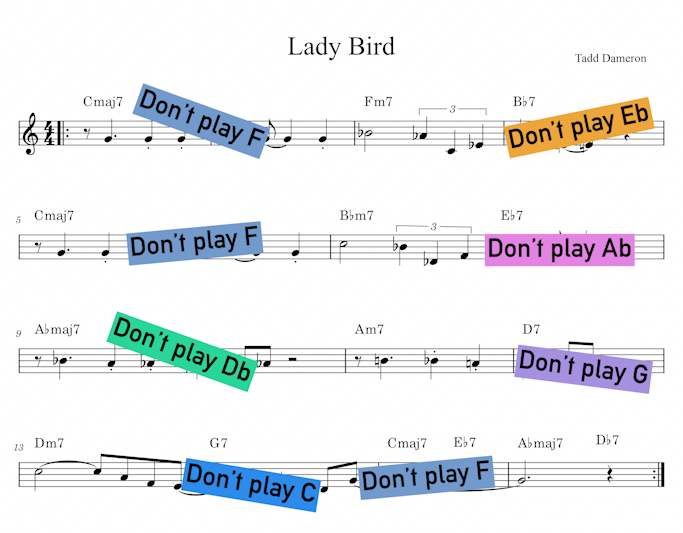 #2 It doesn’t describe the music

If avoid notes make sense then surely nobody uses the avoid notes in their solos. But at the same time, I was given a ton of examples and transcribing solos and it doesn’t matter if it is Joe Pass, Charlie Parker, or Pat Martino. They all use avoid notes in their solos, even if they don’t often really sit on them. So that never made any sense to me. It was not only a rule that I couldn’t use to make music it also seemed like it wasn’t actually true.

To me, avoid notes is the same as teaching people not to use a hammer because that isn’t the right tool instead of teaching them how to use a screwdriver which would be the right tool when they are putting together something they bought at Ikea. 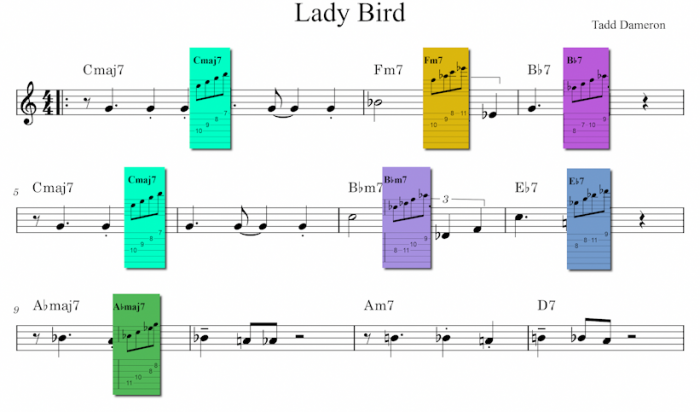 So focus on playing notes that sound good and making melodies that work with for example the arpeggio of a chord rather than thinking about not hitting a specific note in a scale. It is almost like telling you “don’t think about a pigeon.”

What Are Target Notes

The strange thing about target notes is that it isn’t really about the notes, it is about playing towards them. Anything can be a target note, that is really up to you.

You can even make an avoid note the target note, and sometimes that is a great thing to do….

I’ll show you that later in the lesson

In general, we often hear music as movement so there is a flow and there is a direction.

You can hear how this works with Bach:

Where the melody is moving forward and aiming for the target notes repeating a similar structure or motif to make it clear when you hit the target note on beat 1 of the bar.

And This is one of the things that really link Bebop and Bach: playing the movement and linking to the chord.

Take this Barry Harris lick, Where is clearly aiming for the 5th of Cm7 and uses the Bdim to really add momentum on the G7 that resolves to that Cm7 and in fact does the same to moving from Cm7 to F7 targeting the A.

So when you talk about target notes then you are talking about something that you can find in the music, which, as you may or may not know, is how I usually like to think about valid music theory: Something that describes the music that we play.

And it is also a way to develop your playing. Whatever target note you choose, you can sit down and practice to make lines that hit that target note, gradually moving from composing lines to improvising them and in that way internalizing the skill.

Examples of lines resolving to the 9th of Dm7: E.

This is important to be able to do. so let’s go over a basic example of how that works.

I’ll demonstrate this the way I learned to use target notes from my teacher, but actually, Hal Galper wrote a book on the topic that is worth checking out it is called Forward motion. I am just using the approach that I learned because that worked for me and has also worked very well for my students.

Target notes as a strategy works because you play melodies that are actually going somewhere. You are not just playing another note into the void (b-roll into the void) As you heard with Bach or the example from Barry or actually any other Bebop solo, there is an energy that drives it forward.

The first thing is to choose a target note, and if you are new to improvising over changes then you want to take notes that are very clear and easy to hear. This is just because that makes everything easier to learn and also helps you hear how the chords are moving, but as I already mentioned, you can really target any note you want to (which often ends up being any note you can hear anyway because otherwise you probably can’t make any lines that make sense).

For a II V I, the easiest place to start is just to use the 3rd of each chord: Clear notes that define the color of the chord:

So for a II V I in C major you have these chords: 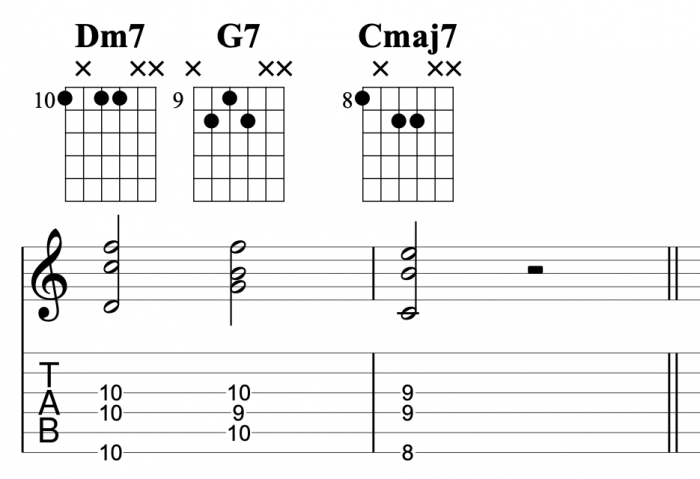 And if you take the 3rd as a target note for each chord then you have these notes:

Now you can practice composing simple melodies that take you from one target note to the next:

And I am sure you can imagine that you have lots of options in terms of melodies for these target notes here’s another basic one:

If you start to be able to do this then You can also start to use the same target notes in other octaves, again because you build on what you can hear and use that to expand.

And then you can start opening up which notes you use, after the 3rd then the 5th is a great option, here I use that on the Cmaj7 chord:

And from here you can gradually start to learn to use other notes, see what you think works and give your ears time to get used to the sound. You can also gradually start to add things like other sounds on the dominant and extra chords. Having the direction in your lines will make a lot of things easier to get to work.

As I mentioned earlier, then you can take any note as a target note also a target note like the F over a Cmaj7. A basic way to do this could be this: 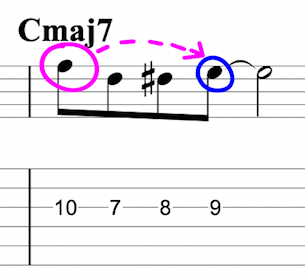 As you can hear then I treat the F as a suspension and resolve it to an E later in the bar. And that is simply just because the F sounds the way it does, and the most common way you will see the note in a melody would be like this, so a tension that is resolving later. Which is a great effect used in many melodies, and keep in mind that if you thought of it as an avoid note then you couldn’t do stuff like this.

Target Notes Are Not Everything

As you might have realized then there is a specific drive or type of sound to this type of melody, and that is a huge part of especially Bebop-inspired music, but it is not the only type of melody that you want to be able to play, so while this is a great way to get started playing over chord changes then it is not the only way you want to work on creating melodies. You want to also work on melodic techniques like Motivic development and Call-response. If you want to explore these techniques that are amazing for getting more of a story into your solos because phrases are more connected then check out this video that builds that up step-by-step.