I often see comments from people who are completely blown away by how complicated and difficult Jazz seems to be. I can easily understand why it will come across like that, but instead of being overwhelmed by funny scales names, crazy chords, or scary rhythms then there is a more relaxed way to get started. As you will see, you can make things simple and easy to work with so that you can start building your skills and enjoy the journey without being scared of falling off a cliff while climbing the Jazz Guitar mountain.

Let’s get into the first problem:

That is, of course, not true, in fact, if you just start with the major scale and just use that then you will get really far, you could also start with the pentatonic scale, but that is a little more complicated and I will talk about that in a bit. In my experience, the easiest thing to do is to start with the major scale. Along the way, you need more, scales but there are plenty of songs where you can get through them with a major scale in a few different keys, think of songs like Pent Up House, Take the A-train or So Danco Samba. 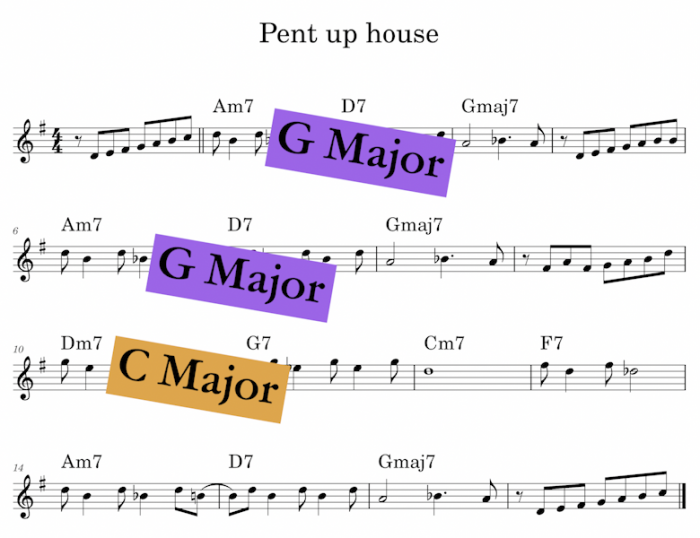 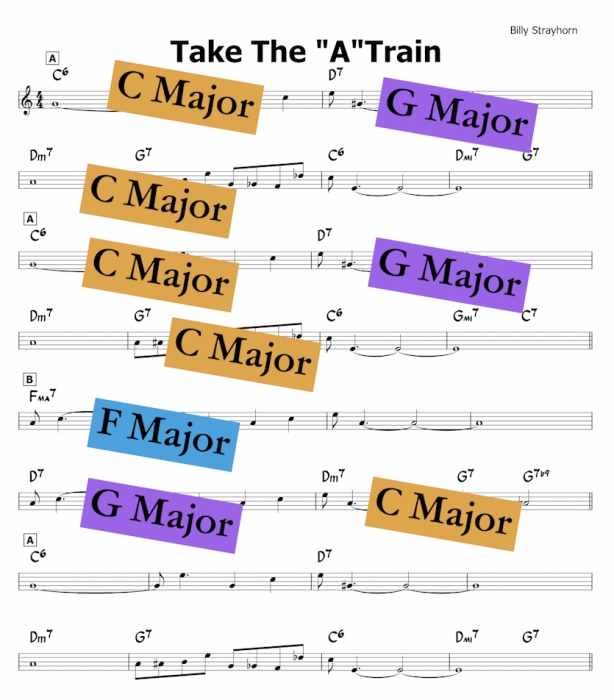 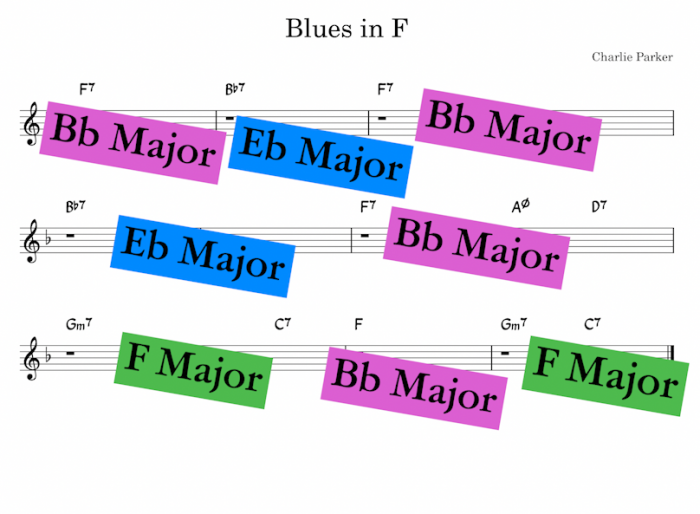 And don’t start with the “all keys and all positions” stuff, if you can play the scales you need for the song in one position and in the key that you need them, then you can start playing solos. Remember that this is the real goal of the whole thing. Pick up the rest along the way. Don’t waste your life practicing all permutations, positions, and inversions of things that you don’t know how to use. 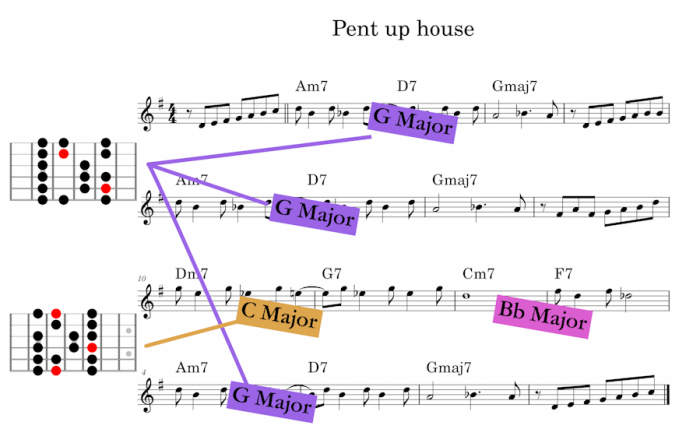 When it comes to starting with pentatonic scales then that is possible, there are songs that you can work through and get started learning just using pentatonic scales. Mostly those are more modern modal pieces, so songs like Herbie Hancocks Cantaloupe Island or Maiden Voyage, which is probably also why both of those are on the famous Jamey Aebersold beginners album Maiden Voyage. 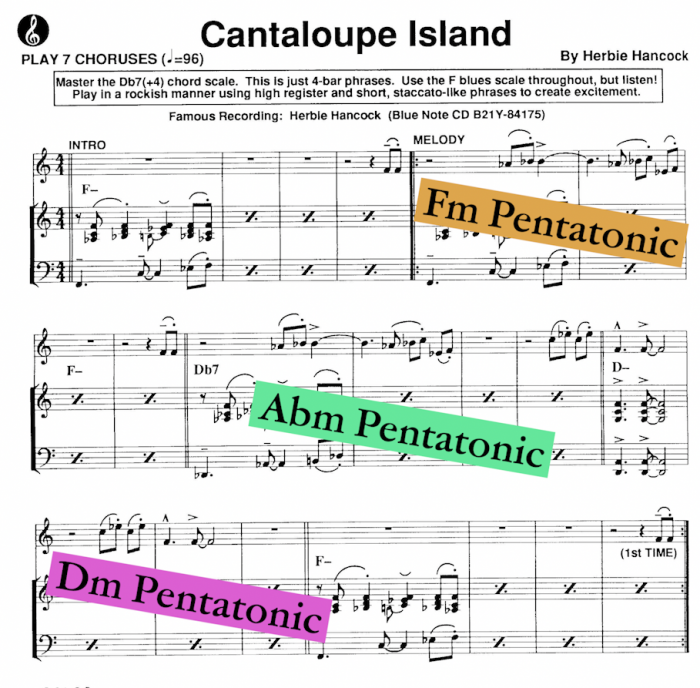 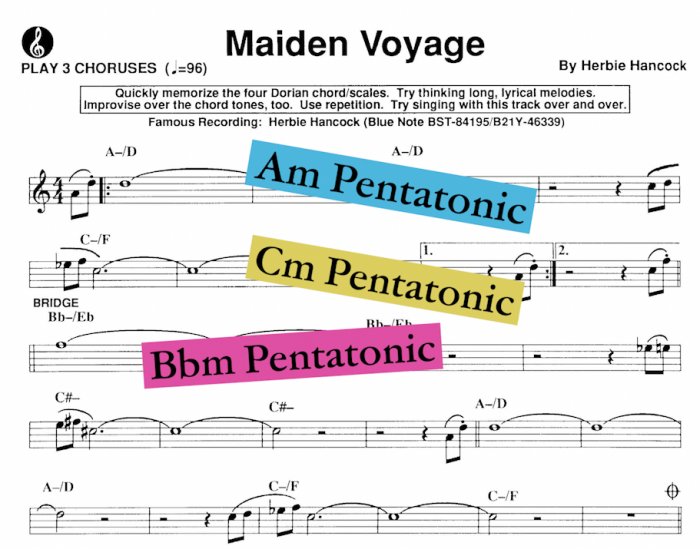 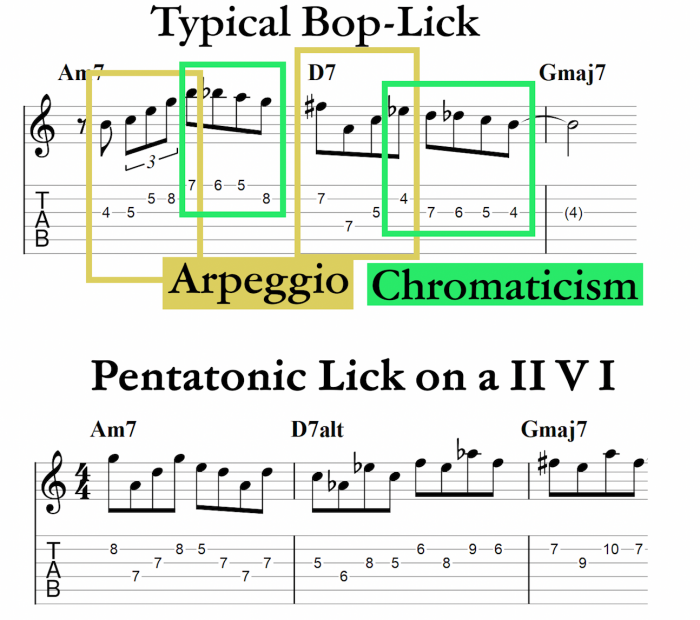 That doesn’t mean you can’t improvise over the songs, but you want to be aware that you might not get the sound you want. So keep in mind that if you “upgrade” your pentatonic scale with 2 extra notes then you have a major scale, that is far from impossible to learn.

When you start out playing Jazz, then you might need some help finding songs and scales, and here I could try to sell you my course because that actually teaches a song like this, but you can also just join the Facebook group and ask there. That is free, and there is a link in the description.

When I started out learning Jazz and learning the first Jazz Standards then I did not know a lot of theory, I knew a bit of chord/scale stuff so that I, for the most part, could figure out what to play on the different chords and then practice that. In fact, in one of the first lessons I had, my teacher told me to play #9, b9, and b13 over a dominant, which for quite some time was the only thing I could play on dominants and I could NEVER get that to sound good! 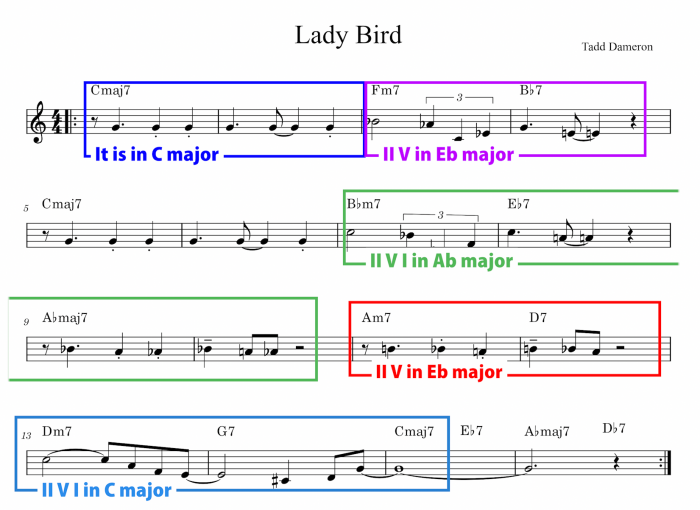 But I still managed to power through. Mostly by being very stubborn, and in the beginning, my approach was that if I could really not figure out what to play on a chord then I could play the melody or find a few good notes like the arpeggio, which gave me a way to survive, and still play the song. It sort of gave me space to figure it out later..

The Advantage of NOT having Internet

In a way, this is one place where I was maybe better off that there was no internet. I would need to try to find a book in the library or wait until I had access to a teacher before I could figure out a chord that didn’t make sense, and that made it easier to just fix the problem with a temporary solution and then wait until I could learn more. Now you can go on the internet and disappear down a rabbit hole spending hours or days googling German augmented 6th and Common tone diminished chords, and the worst part is that often one source says one thing and another will tell you the exact opposite.

So I guess my advice is to not be afraid to cut some corners or only have one or two notes that work on a chord in the beginning. It is about playing the song, that is the bigger picture and you can work on the details along the way without having to spend hours on understanding the analysis of the voice-leading of the original piano arrangement.

The music theory is there to help you play and understand what you are playing, and most of the time you can get really far with Major scales, basic diatonic chords, and a few secondary dominants. No need to make it more complicated than it is.

If you are sitting down to play and look at a piece of sheet music like a lead sheet or a big band part then it can seem insane how complicated and detailed the chords are. 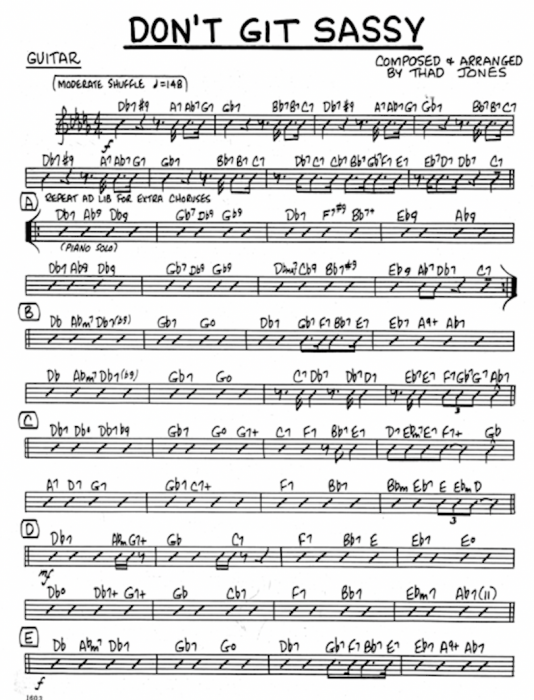 And it seems like you have to use quantum physics to play through the chords of the song.

One thing that is important to remember is that in Jazz, chords are there to be interpreted, so if a composer or arranger writes something with 2 or 3 extensions and alterations then that does not always mean that you have to play that, that is just a description of what is happening in the music at that point. 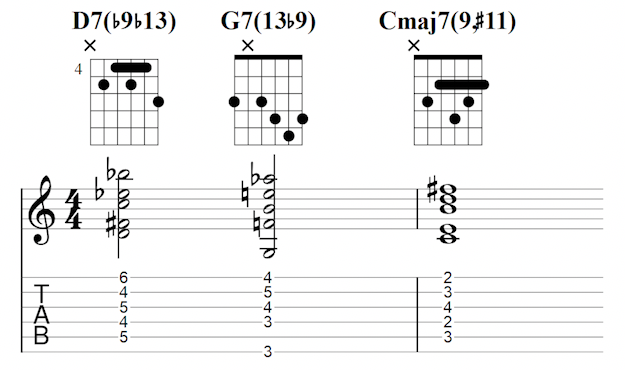 So instead of worrying about all of that then you can also start with just playing the basic chord, which on guitar usually means playing the shell voicings with or even without the root. You start there and then you can add the rest later when you are comfortable reading and interpreting chord symbols like that. 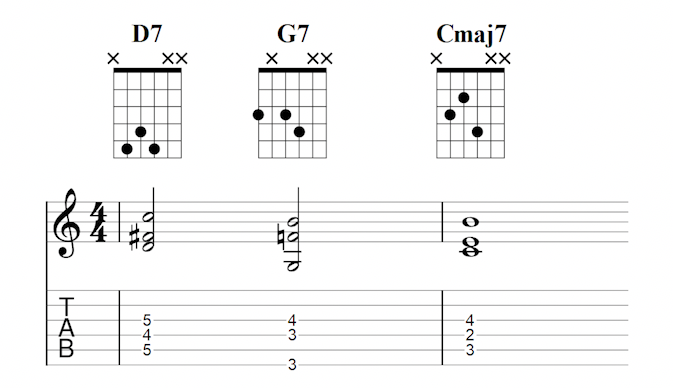 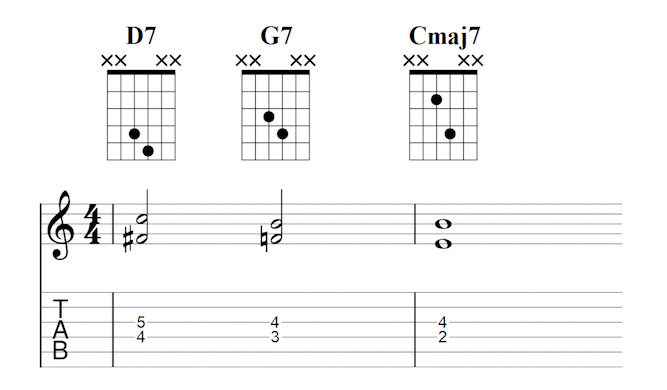 No matter what level you are at this is a great exercise, and all the chords can be boiled down to more basic 4-note chords and you just ignore the rest and don’t play those for now. 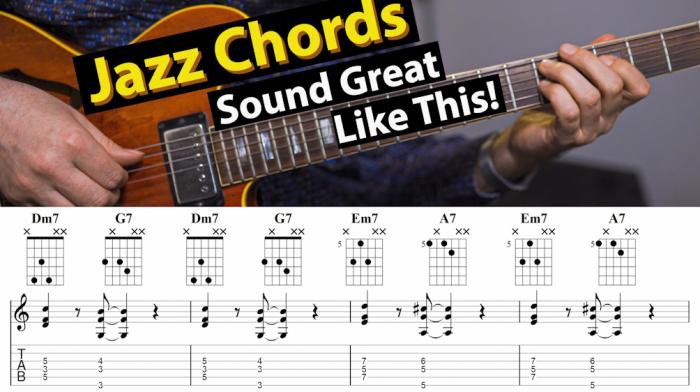 Jazz Songs: Somebody Spilled Alphabet Soup On My Sheet Music

This is of course closely related to the previous topics of theory and chords and how things might seem incredibly complicated, but also with songs there are places you can begin where it is not immediately Giant Steps played backward in 11/8.

There are a few things you can get right that will make it easier to learn songs in the beginning. And these are pretty much all things that I did not manage to get right when I started out, I will tell you about that in a bit.

The first two songs that I learned were Stella By Starlight and There Is No Greater Love. Both great songs, but if you hold them up against my points here then they far from ideal 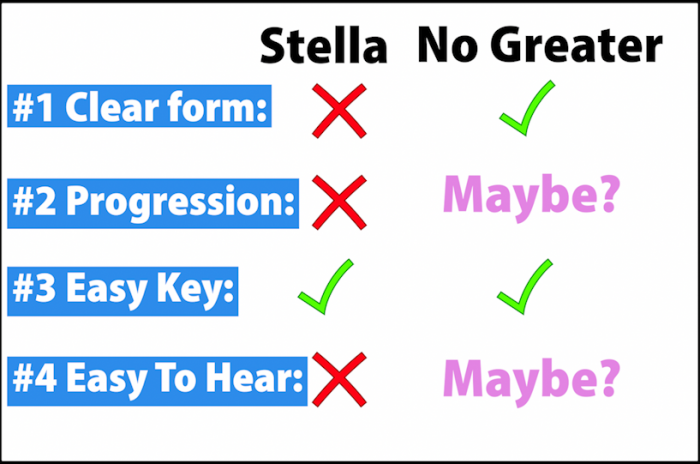 If you want some better options then check out the video I did suggesting 10 Jazz Standards to begin with, I’ll link to it in the description. There are a lot of fairly easy standards so you might as well start there and not shoot yourself in the foot to begin with.

For the first songs, you don’t have to learn them by ear, but it really does pay off to get started with that pretty quickly begin with the melody, and then later you can add the bass and use those two things to help you figure out the chord.

A key ingredient when you set out to learn solos by ear is probably just enthusiasm that hopefully turns into stubbornness. That was at least what it was like for me. The first things that I transcribed really just came from loving how Charlie Parker and John Scofield played and then being really curious as to what the HELL they were doing because I really liked it. Then a ton of banging my head against the wall followed while I tried to figure things out. I guess I was lucky that I mostly connected with the bluesy Parker things so there were songs and solos that I could figure out like the theme from Bluebird and the solo from Now’s The Time where he uses the same lick as in Billie’s Bounce, and I did not learn entire solos just the bits and pieces that I could figure out. The same goes for Scofield where I had heard All The Things You Are and I could (probably sort off) play the melody but when I listened to his version on Flat Out it took me somewhere between 10 and 20 seconds to be completely lost.

But similar to how I made horrible choices for songs then you can actually find some pretty easy solos that you can learn, and learning solos by ear is the most efficient way to learn phrasing and begin to hear the right type of melodies and rhythms. It will teach you so many things that you don’t want to rob yourself of that experience.

And in general, listening to a lot of Jazz music will really help you with a lot of these issues. Even if it is just by listening for a few hours every day in the background then that will pay off massively later, just by getting the music into your ears, a basic feel for the melodies and the rhythms that you don’t get if you only practice the music without actually listening to it.