This lesson comes from a short discussion with a friend of mine who mentioned that he was tired of what he played on the dim chord progression. I am going to try to answer this by not so much give some arps or patterns to play, but more try to talk about how what you play relates to the chord before or after. For me personally that is a much better strategy for making lines on almost any progression.

In one of my previous lessons I talked about how the scales and arpeggios I would use on the I bIIIdim II V: Turnarounds part 2 – I bIIIdim II V For the III bIIIdim II V I am using the exact same scales as the III is only there as a sub for the I chord.

The examples in this lesson are in the key of Ab, so the progression is

And here is an overview of the scales I’d use.

For the Cm7 I am using Ab Major (it’s the 3rd degree in Ab). The Bdim is using C harmonic minor. Bb is using Ab Major (which you could also call Bb Dorian) and the Eb7alt is the altered scale, which is the same note set as E melodic minor.

So as I mentioned I tend to focus more on how I fit what I am playing over a chord in a bigger melodic context instead of having tons of licks and patterns that I string together. For me this works a lot better for the solo as a whole. I also prefer using the harmonic minor scale over the bIII dim chords because I find that it is more connected to the context where the chord is. Another problem with the diminished scale is that it lends itself too well to patterns, and overuse of the symmetrical aspect of the scale. For me personally that often yields very weak and uninspired melodies that don’t come from the sound of the notes but more the fingering or pattern being played. Obviously there are lots of great players who like to use stuff like this, Mike Stern and Michael Brecker to name a few, and I am very aware that this is a question of taste.

In the first example the melodic focus is on moving a motif through the progression. The main motif is first played on the Cm7 as a Cm pentatonic melody. It is then altered to fit the Bdim (and actually becoming a G7 arpeggio), repeated in the original form (but a whole step lower) on the Bbm7 and then concluded by an E7alt line using an A7 arpeggio and a trill to resolve to an Abmaj7.

The second example is a sort of statement follow up, or maybe even call response per chord. It may be a bit hard for me to really describe this. The Cm7 line is in fact a Cm7 arpeggio first ascending then descending. To me the defining characteristic is the ascending arpeggio. It is answeered on the Bdim by a triplet descending arpeggio which then continues to a Bbm7 arpeggio played similar to the Cm7 arpeggio. On the Eb7alt the line is firs a descending A major triad followed by an EmMaj7 arp that resolves to the 5th(Eb) of Abmaj7

The final example is not using motifs or repetitions, but is instead trying to create a flow over the 4 bars. The first line on the Cm7 is a pattern played in the Cm pentatonic scale. It is then to some degree enforced by the ascending line on the Bdim ending on a high G which is resolved to an F. You could describe the first four notes of the line as an Abdim(maj7) arpeggio. On the Bbm7 the high register of the Bdim is resolved with an arpeggio run and it moves via an encircling of the G to the Eb7alt. The construction of the line on the dominant chord is a triad pair: Gaug and A major. First the G augmented followed by a 2nd inversion A major and then the first two notes of the G augmented which are resolved to the 9(Bb) on the AbMaj7.

I hope the melodic concepts I talk about in this lesson are something you can use to get some new lines on this type of progression, and that you have an idea about why I prefer the harmonic minor scale on the dim chords.

As always you can download the examples as a PDF here:

How to make lines on a III bIIIdim II V progression 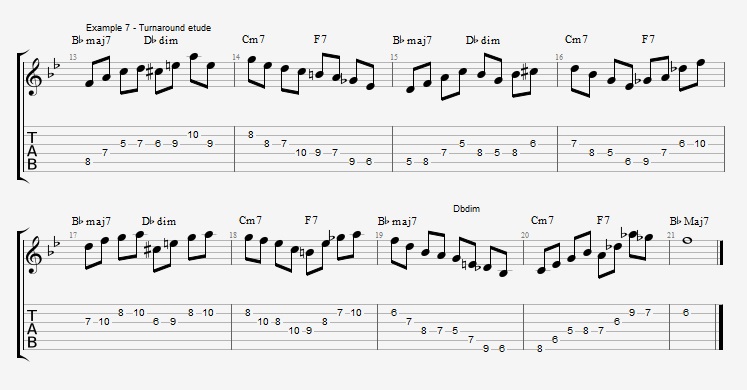