Chromatic Passing Notes are such a powerful part of the Jazz sound!

One of the few times that I had a guitar lesson that really blew my mind and opened up how I thought about music was before I was even interested in learning to play Jazz. In the lesson, my teacher showed me a way to use chromatic notes when I was improvising and that felt like I had just been given the secret power to use all the wrong notes, and still sound great! (EXPLOSION?)

For Bebop-inspired Jazz, chromatic phrases and using chromatic notes is a huge part of the style, and, as you will see, it is one of the easiest ways to start getting that sound into your playing 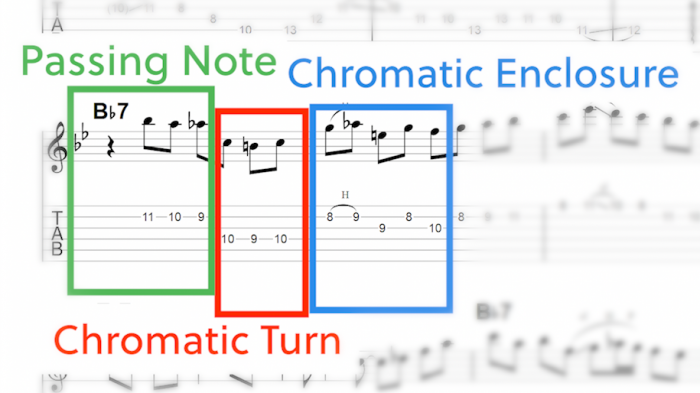 The phrase he showed me was this: 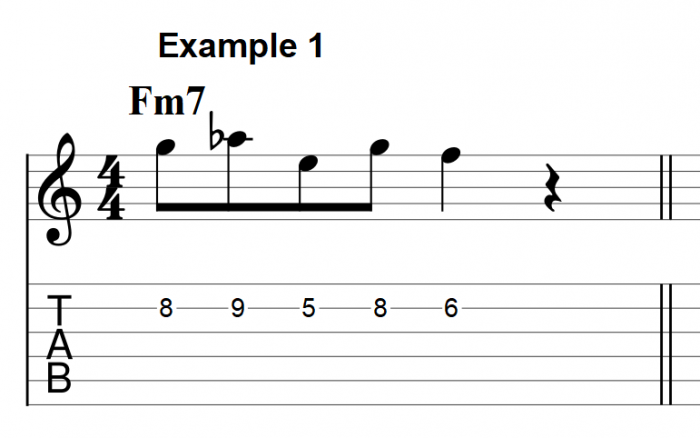 When it comes to using chromatic notes in your solos then there are two main ways you can do that.

Passing notes, which is a way to have a single chromatic note that resolves to a note in the scale or a chord tone 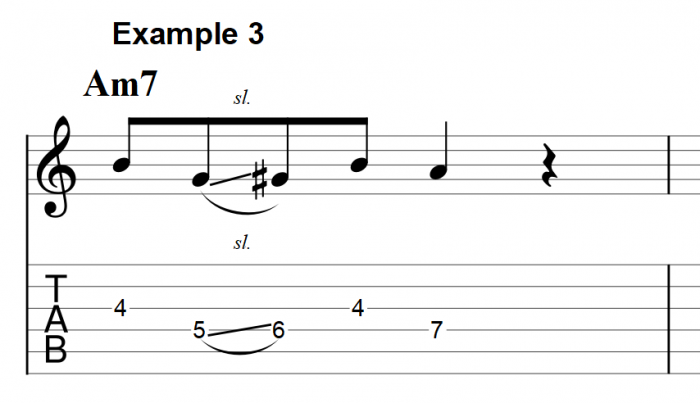 Chromatic enclosures are great as short licks that you can combine with the scales and arpeggios in your solo to play lines that have a surprising element and really move forward. 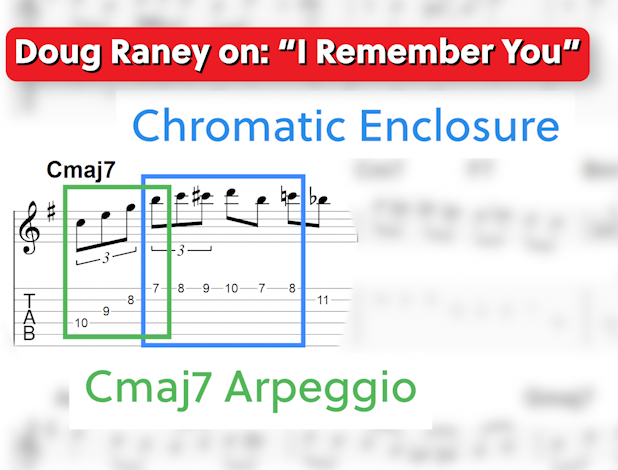 They actually have an advantage over just adding chromatic notes, but I will get back to that later.

Let’s first check out some solid chromatic enclosures that you can easily add to your playing so that you can hear how powerful a tool they are for Bebop lines!

All enclosures have a target note, so the phrase is moving toward that note. (Pat Martino Enclosure) This enclosure is using a half step below and works better if you have a diatonic note a whole-step above the target. 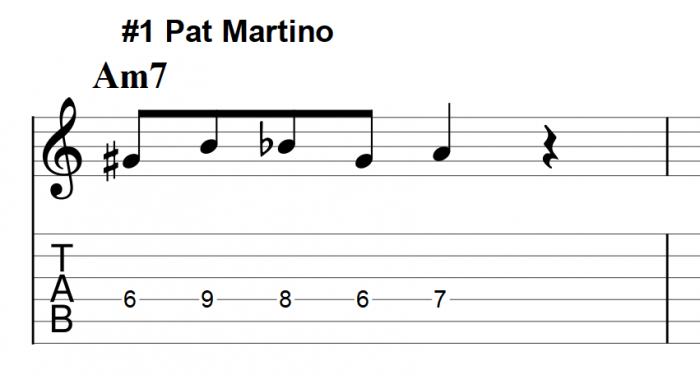 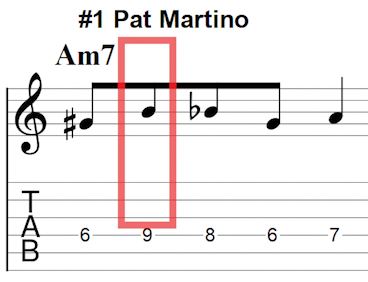 When I was taught this I was told that it was from Pat Martino, but I don’t think I have ever heard it in any of his solos? But feel free to let me know in the comments if you know of a place where he uses it.

You can create a great line by combining it with an Am7 arpeggio: 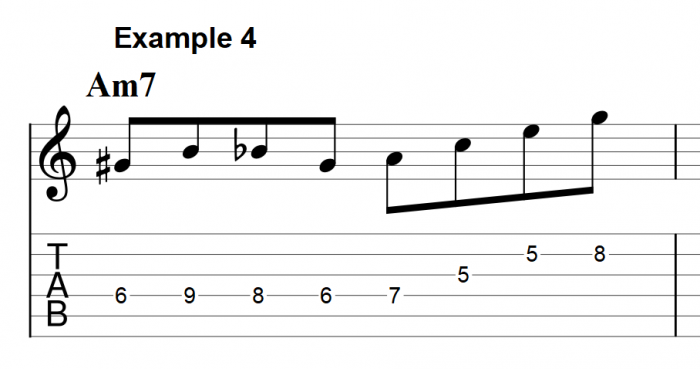 And combining enclosures with arpeggios is a very solid strategy for making lines sound like Jazz!

You can also use the 3rd of the chord, C, as the target note and play that arpeggio giving you this:

I am sure you can hear how this is a fairly simple way to create some Bop lines that really work! 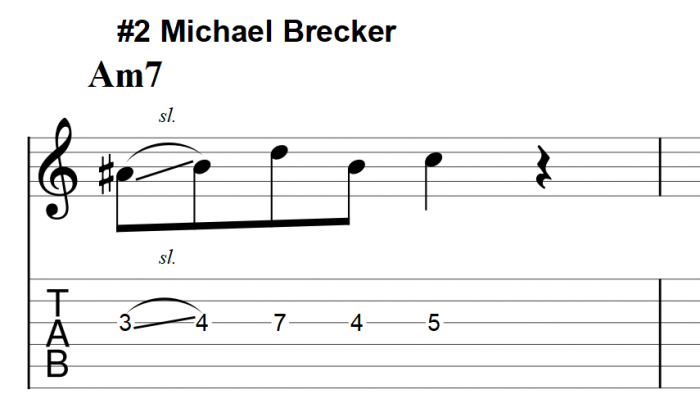 Michael Brecker has some great chromatic phrases as well. This is a variation on one I took from one of his solos, and it is a great way to use a very dissonant note right on beat 1. I am combining the enclosure with the arpeggio from the 3rd of the chord.

So if people tell you that you can’t put chromatic leading notes on the beat then play them this example. (Michael Brecker Enclosure) It is interesting that like this, the enclosure actually only has one chromatic note. but of course, in the end, a bebop line is about creating movement.

You can use it where more of the notes are chromatic because that works equally well if you use the root, A, as a target note and then you get this:

And as you can see, this phrase is really just built around playing the enclosure: ENCLOSURE and then playing the arpeggio ARPEGGIO.

Since you know the basic recipe then you can also start to try other things with how you play arpeggios and where you can put the enclosure, because there are so many great sounding options for this.

EDITOR JENS: I took this phrase from his solo on Confirmation, and I just went back and checked, and he actually plays it a little differently moving the rhythm, but this also illustrates how you need to make these things something you can use and a part of your sound.

Let’s try to use the enclosure a little differently in the line.

The reason I thought of this topic for a video was actually that I came across that first enclosure in a Sonny Stitt solo and thought it was worth showing you. This is a pretty common line, I have already talked about it in my video Doug Raney as well.

The enclosure is this: 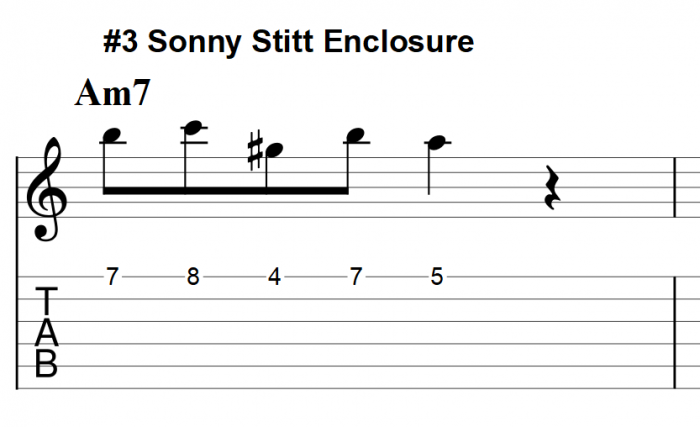 What makes this an appealing melody is actually the interval skip in the middle as much as it is the chromatic leading note under the A, but maybe that is only me?

Using this together with an Am7 arpeggio, which is now played as a triplet gives you:

What Is So Amazing About Enclosures? 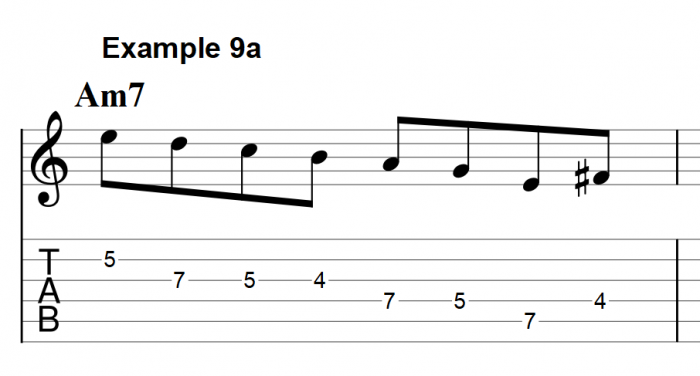 and adding a single passing note rarely changes the direction of a melody, but adding an enclosure does. In that way, enclosures make your lines more surprising and interesting. 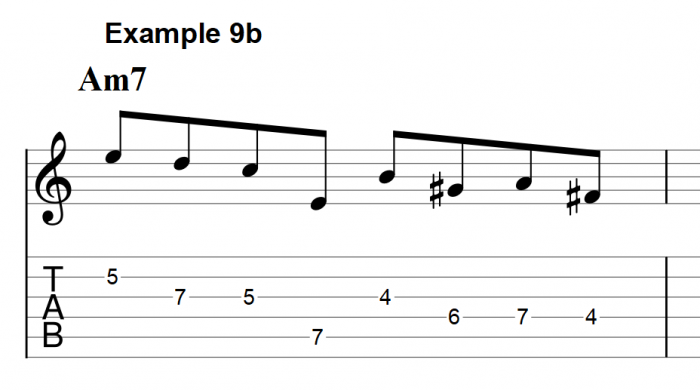 Barry Harris has a whole system for chromatic notes, which actually offers some really nice things as well. Let me know if you think a video on that would be interesting?

NOT only on the off-beat

In some lessons, you will hear that the chromatic notes are supposed to be on the offbeat and chord tones should be on the downbeat so that the chord is clear. That is actually not true, you are free to put them anywhere you want, but you do, of course, need to make it into a melody that makes sense.

The chromatic notes are there to create tension that then resolves back into the key and if you put them on strong beats then they just become stronger tension. Charlie Parker actually did this quite often, if you look at a part of his solo on Anthropology there are two very clear examples with a C# on D7 and an F# on Bbmaj7.

If he uses that, then so can you, so let’s go over an example that does exactly that:

This enclosure is approaching the target note in half steps from both sides: 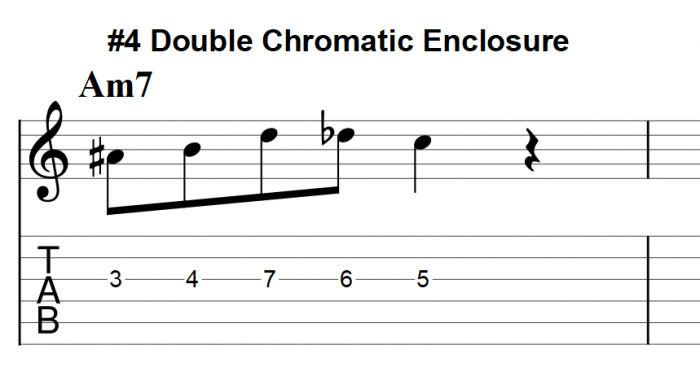 Which is often called a double chromatic approach.

And to make the line even more interesting then let’s combine it with a Pivot arpeggio. And Let me quickly show you what that is using a Cmaj7 arpeggio. A pivot arpeggio is an arpeggio where you play the root and then move the rest of the arpeggio an octave down. 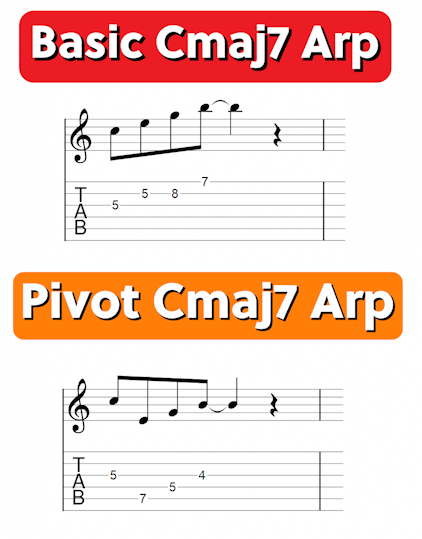