There are 3 types of diminished chords that I use all the time. They are great for a lot of things and sound beautiful in chord progressions.

Two of them are in all the Jazz standards and really just a part of tonal harmony but the last one, which I learned from Barry Harris, even if it is not a part of his diminished scale system, is maybe not even really a diminished chord. Maybe it isn’t even a chord, but I play it all the time and it is a great trick even if it doesn’t have a theoretical explanation.

A funny side-note is that I always get comments from people insisting that ALL diminished chords are dominant, which, as you will see, I don’t agree with but you should think about it in any way that works for you.

The dominant diminished chord is really from the minor key, but we can use it in major as well. 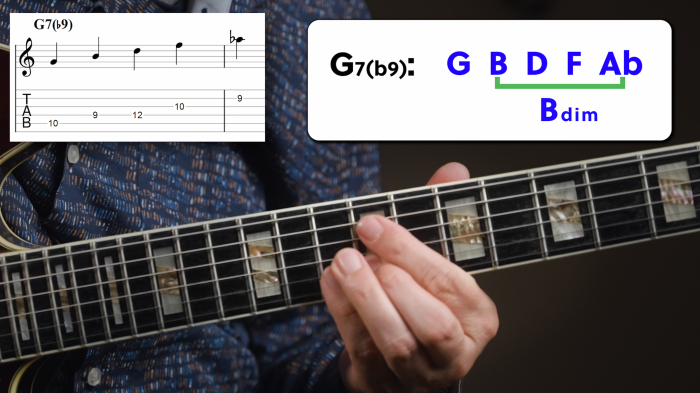 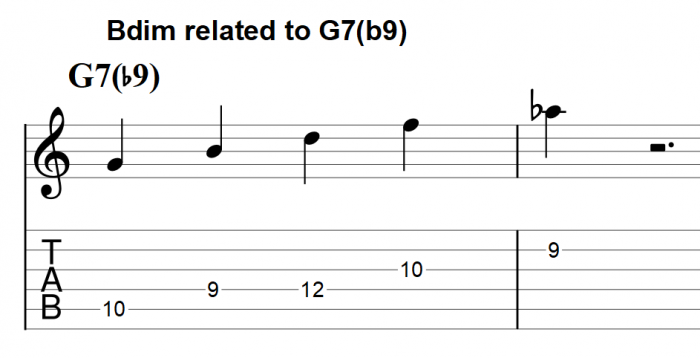 so the connection to G7 is pretty clear and it resolves like this: 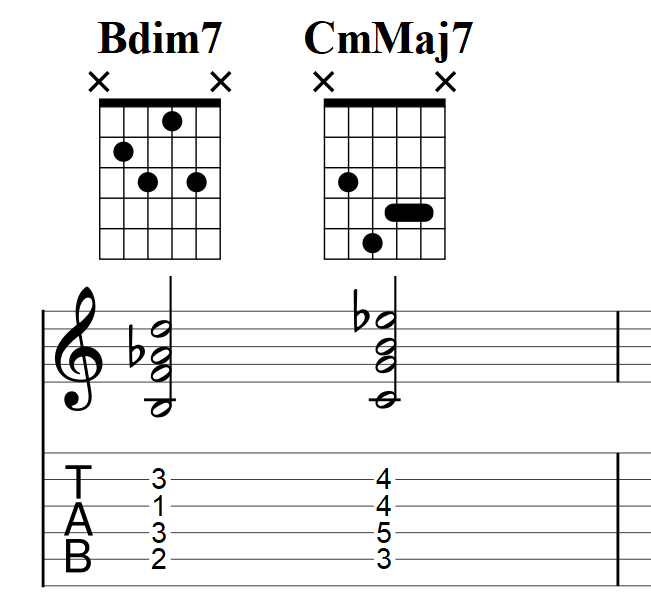 And you can resolve it to major as well: 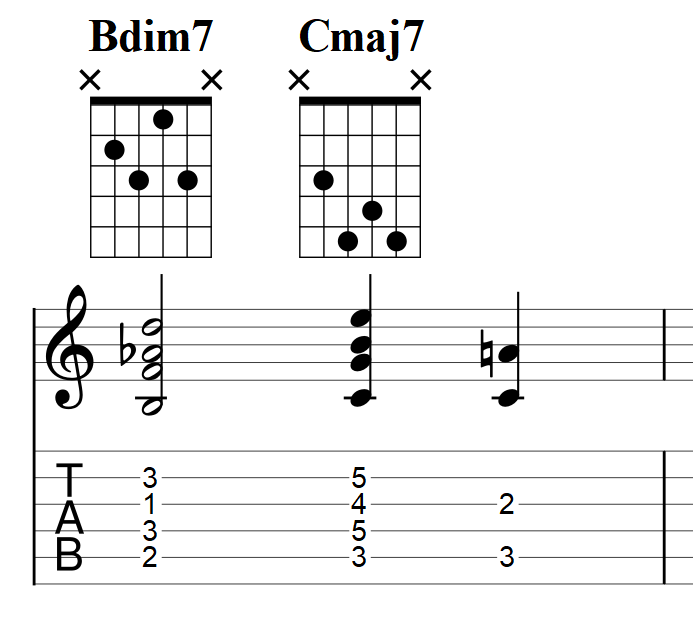 There are two chord progressions with this chord that you see fairly often and both sound great, one of them is used as a sort of plot twist in the harmony, which is very nice. So here it is working as an A7, the dominant of Dm7, and creates a nice chromatic bass line moving up to Dm7. Bassline melody is really what diminished chords are all about!

A great way to use the dominant diminished is to pretend that it is just a boring old II V and then it suddenly goes somewhere else: I need to talk about the extension on the dim chord here, but first, just check out how this is a II V in C that then suddenly takes a detour and resolves to Am7 via the dim chord. That is a great plot twist. On the dim chord, I am using a b6 as an extension and this is an important note to know for dim chords. 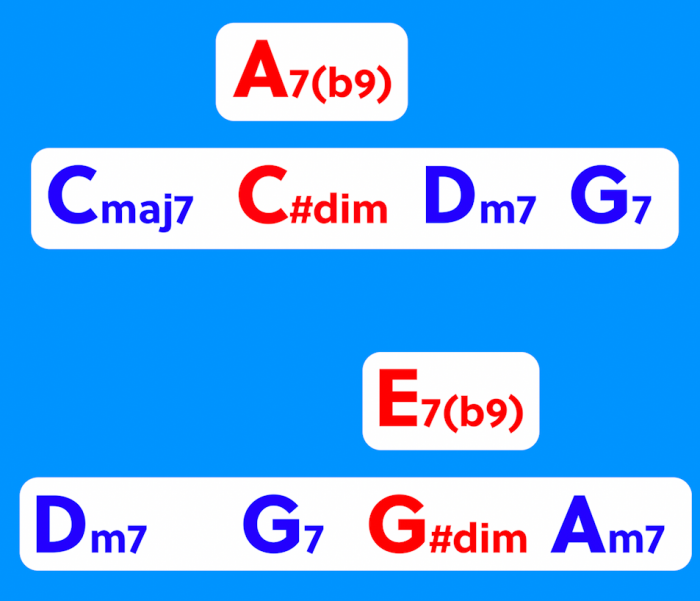 In both examples, the diminished chord is a secondary dominant and they simply just take the  scale that you would use for the dominant, so if you resolve to Am then you would use A harmonic minor over the dim chord because it works as an E7: 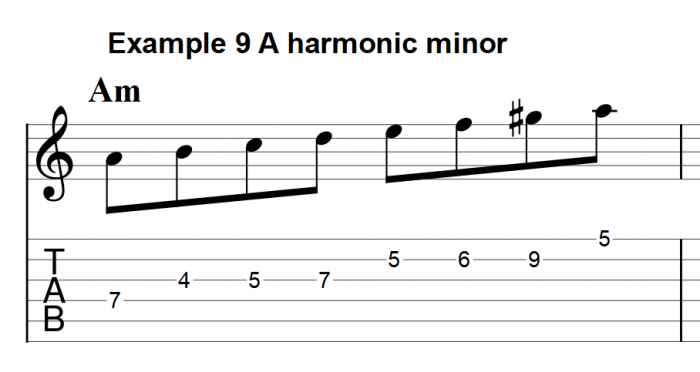 And from that scale, the E is a great sounding extension and also the root of the dominant it is associated with: E7 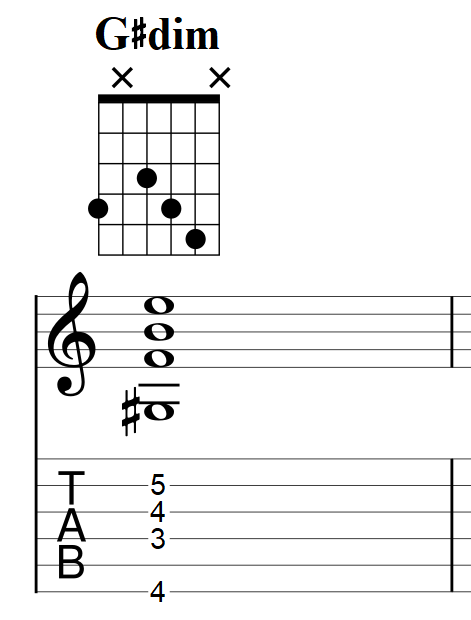 But let’s move on to the subdominant diminished which are actually the most common ones.

Subdominant Dim – It Is a Thing!

The dominant diminished is easy to understand because it is a diatonic chord in harmonic minor and closely related to the V chord, but then you have these chords that move in a different way:

This one moves down! 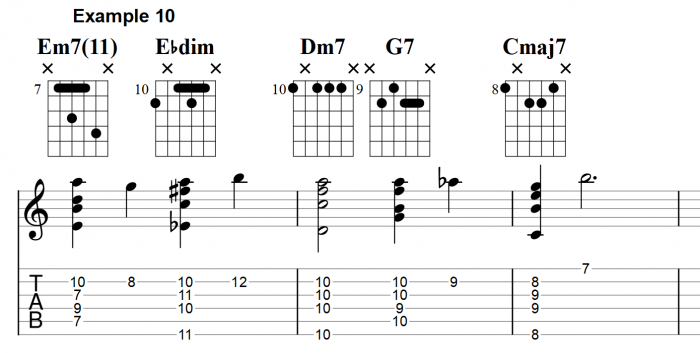 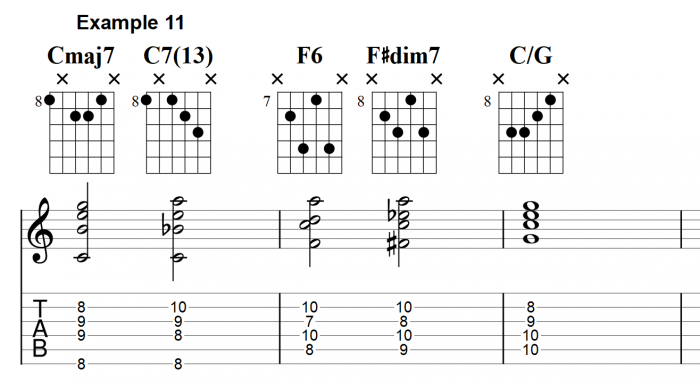 Let’s start with the F6 to F#dim example. I’ll first go over the chords and then get into scale choices

Here you can see how the F#dim appears from altering two notes in the F6. You can also see that it still contains a C and not a B which is why it isn’t dominant in the key C, they don’t sound anything like a G7. 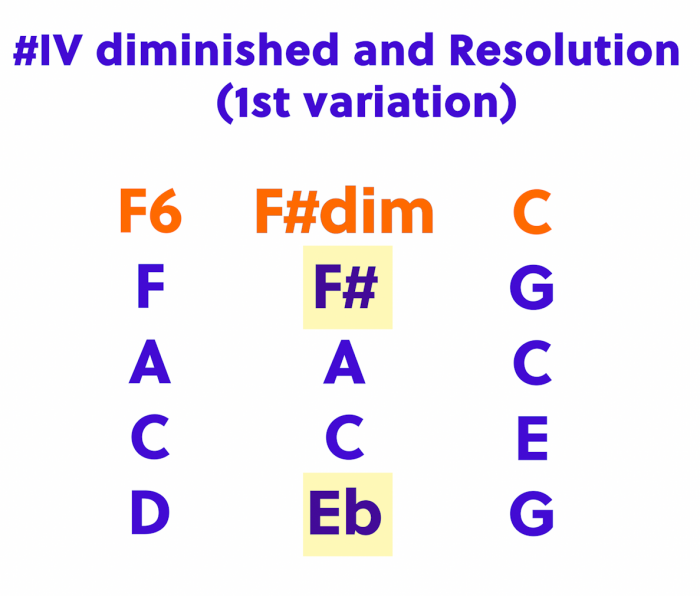 The oversimplified way of arriving at that it is a subdominant chord is just to ask 2 things:

1 Does it move to Cmaj7 as if it is resolving? Yes – so it isn’t tonic 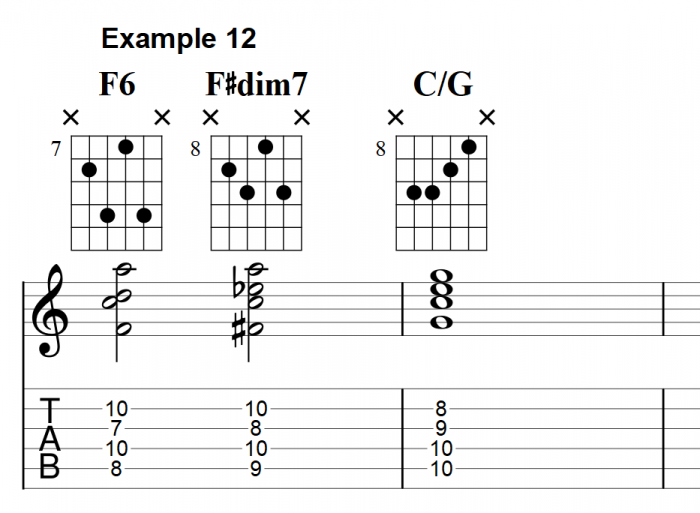 2 Does it sound and resolve like a G7, which it doesn’t so it isn’t dominant If it isn’t tonic and also not dominant then it is subdominant. This is a bit crude, but it it does fit.

Since it is subdominant then it makes sense to notate it as derived from the IV chord, so I usually write them as #IVdim chords. There are actually other #IV subdominant chords, but that is for another video.

But it also resolves down to a subdominant chord.

Sometimes I just write #IVdim instead of subdominant diminished, it is a looong word and I am from Denmark which is a small country, we don’t have room for that stuff. In fact, I will often just write IV when I mean subdominant, so a backdoor dominant which is also a minor subdominant is referred to as a IVm chord. I usually make it clear in the videos, but it sometimes slips. I find it useful to have these groups of subdominant chords that are #IV, IV and IVm, but it is probably short hand and not too precise

Before the last type of dim chord then there is also the other variation of the subdominant diminished. 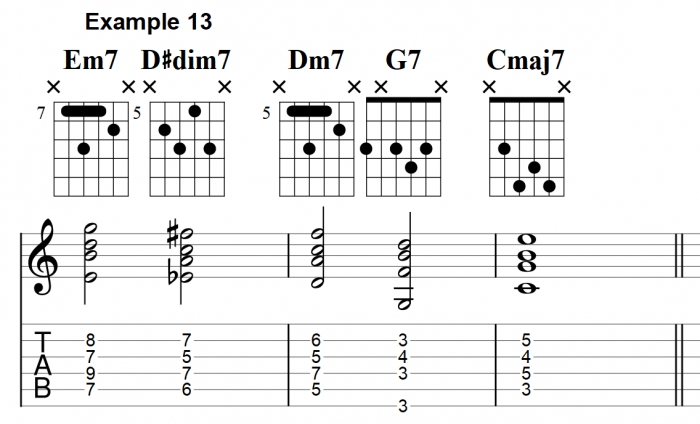 This is really just an inversion of the #IVdim,

it is Ebdim and the subdominant diminished but it is resolving to the Dm7, 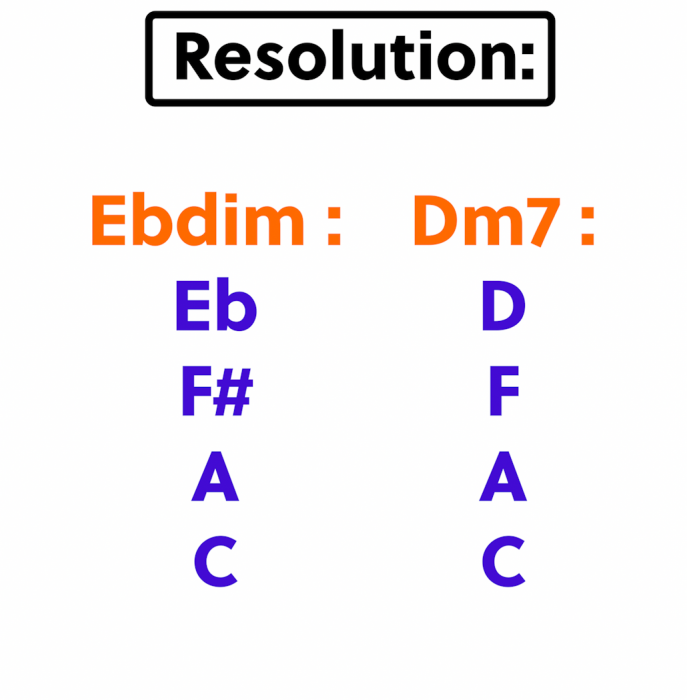 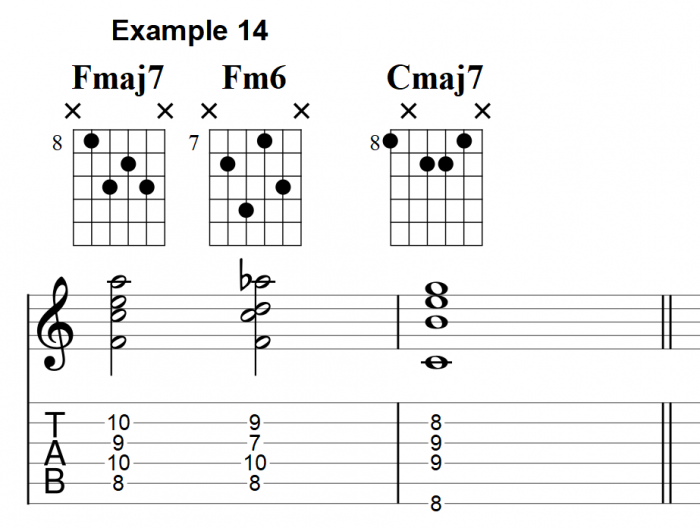 And this works great to have a chord that can transition to a II chord which is of course also how you see it used the most.

With the Dominant diminished then you have a scale that is found in and that is part of how we understand it which makes it a lot easier.

The subdominant diminished is a lot more vague, but if you look at it from a different perspective then you can construct a scale that fits the context of key and then realize that you already know that scale.

If you look at the F#dim and the C major scale then there are two ways to create a scale that works:

They both work and there is one note difference so it is really up to you. I tend to recommend the harmonic minor scale mostly because you need that anyway and you probably know it already.

So why am I not using the diminished scale, since it is called a diminished chord? It is the same name!

In the end, you can use any scale you want it is more about how you do it than which scale it is. The chord progressions that I talk about in this video are all tonal, so they are in a key and that tells you something about how they sound, and which notes want to go where. And you don’t hear each chord as an isolated thing, you hear the whole progression or the whole song.

The diminished scale is atonal because it is symmetrical, it can resolve to lots of places and nothing sounds like the root. That is why it doesn’t really fit and is more of a special effect in the music. 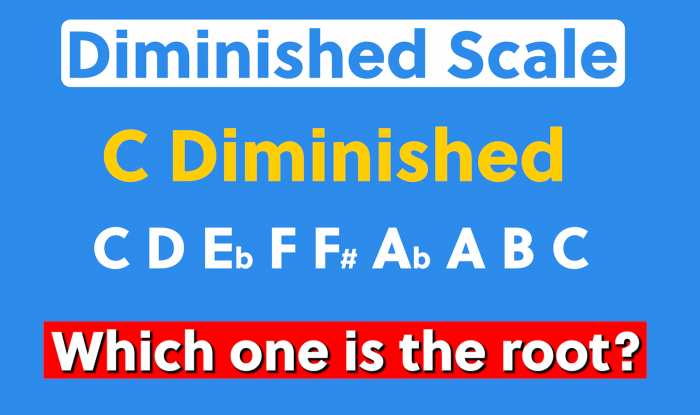 As I already hinted at then the final diminished chord is maybe not really a chord, but that doesn’t mean that you can learn something important from it.

When I was in the piano class with Barry Harris that first year I went to the Hague then he told the piano players to play this exercise that I then transferred to guitar. And it is all over my comping and chord solos:

The exercise is moving the maj7th and the 9th down to the maj6th and the root in half steps, 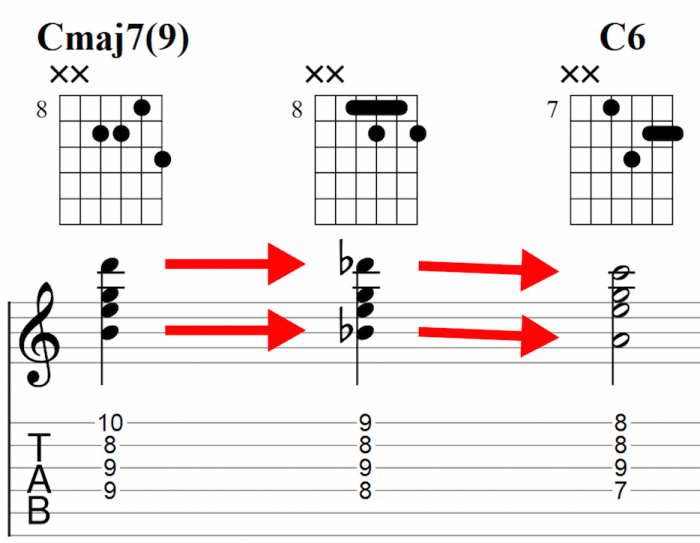 and as you can probably see, then every time the middle chord is in fact a Bb diminished chord. (highlight dim chord – Paly example and stop on the dim chord!) 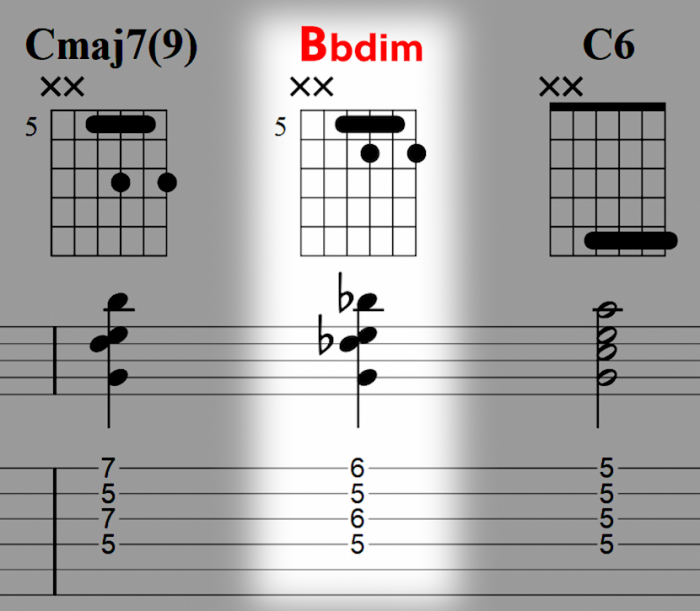 But maybe this is a place where looking at what is happening vertically and giving it a name as a chord, is actually not the best way to understand it. Instead, it makes a lot more sense to think of it as voices moving, because the diminished chord only appears as a side effect of some chromatic voice-leading. Probably also why it is not something you will find notated as a chord in a song, at least I can’t think of one that has that. Sometimes focusing too much on vertical harmony rather than how the notes flow is not good for making music and hearing what is going on.

That of course doesn’t mean that this isn’t a great sound, and the exercise sounds great in minor as well, which doesn’t give you a dim chord. 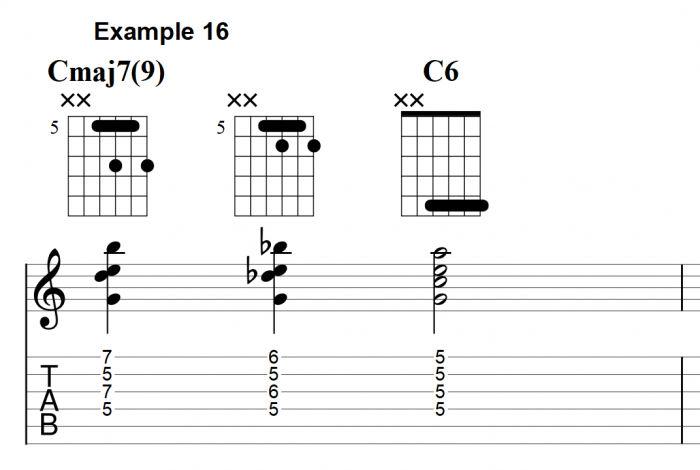 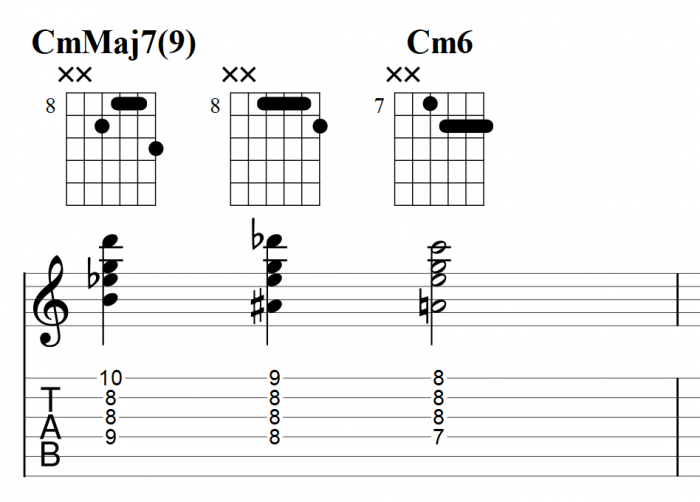 The Diminished Chords are often causing a lot of people trouble, and that is a shame because there are so many amazing sounding progressions that use diminished chords and you can make beautiful chord progressions with them as well.

In this video, I am going to show you the two main categories of dim chords and how you can use diminished chords in some great sounding progressions.

It isn’t that difficult there are just a lot of people telling you to think stuff on dim chords that don’t fit with what you hear, and that is probably getting in your way.