Playing fast tempos is always a huge challenge on guitar!

Technique is probably the first thing that hits you as impossible to master, but maybe that is not even the biggest problem, and you can get a lot out of changing how you think to get better at up-tempo playing.

I managed to run into probably every possible problem when I took a deep dive into getting better at playing faster and improving my technique, which is sort of how this started.

How I Practiced To Improve My Technique

When I was in the 4th year of my conservatory study, I decided that I really wanted to get better at playing faster tempos and faster lines, and I set up a practice routine to help me do that.

My inspiration for this approach was maybe less than obvious since it was inspired by a video clip that a student of mine had shared with me. 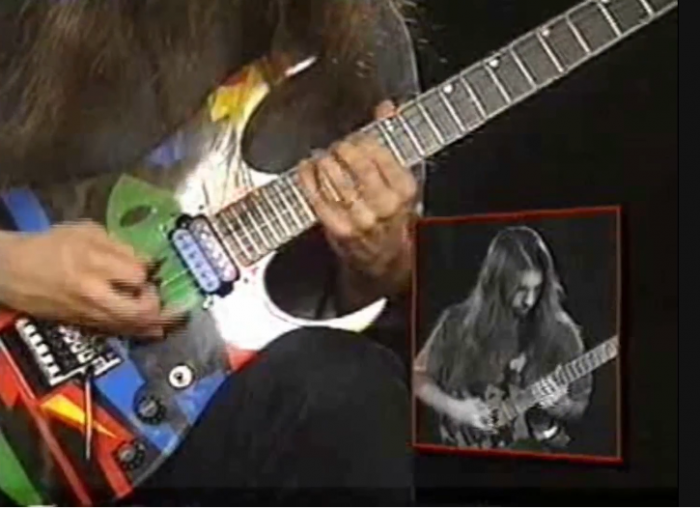 Essentially what John Petrucci was doing was to take a simple exercise and then speed it up from very slow —  to as fast as you can, and that process I took to my own exercises and repeated every day while slowly getting a bit faster. The way I did it was to take scale positions, but you can also start by working on smaller fragments and then expand that into longer exercises. It wasn’t only scales, I also worked on speeding up other exercises in the scales like intervals, triads, and diatonic arpeggios, because that is the stuff I want to play. Since I was focused on alternate picking, I was also practicing some Steve Morse-inspired exercises which I really enjoyed. I have some old videos with those.

The most important part of this is to be precise when you play slow so that your technique does not fall apart when you start speeding it up, something I still have to remind myself of all the time, and frequently get confronted with when I record myself improvising.

This really helped me develop my alternate picking and after some time I could play a lot of stuff pretty fast, but also I quickly started to realize that other problems were starting to turn up and that I needed to address those to play better up-tempo solos.

Getting The Practice Tempo Right

One thing that I discovered once I was able to play the exercises fast was that it did not immediately translate to being able to play solos, I didn’t want to only play scale runs when I was playing uptempo and there were other skills I also needed to develop.

I needed to start developing more vocabulary that was useable in higher tempos, which means more efficient and often more 8th note based so that I wouldn’t have triplet or 16th note passages in the middle that I could not play fast.

This reminded me of something one of my teachers in Denmark, Bjarne Roupe had taught me about not playing too slow: If you want to get better at playing fast and develop your ability to go through the changes then you should practice in a medium-tempo where you can easily play the lines and still have some freedom, but you should not play so slow that you start doing double time or triples, instead, you want to be disciplined and keep in mind that you need to be able to play this faster while you are practicing to become freer and develop more vocabulary

On a side note, the lesson where he gave me this advice was when I brought in Moments Notice. Because my combo teacher at the time had decided that since we could almost make it through a medium-tempo Just Friends then this Coltrane song was a logical next step.

Finding the right medium practice tempo and then working on playing like that is a great way to develop your playing, and it also enables you to sometimes try to practice soloing on a song similar to how I was practicing technique, so gradually speeding things up.

If you start working on this then I can also very much recommend learning to play towards target notes which will help you manage another thing that is incredibly important for faster tempos. 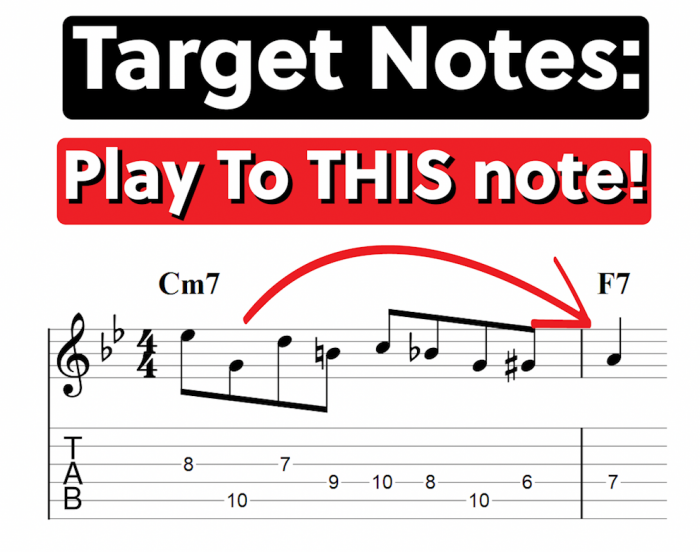 You also need to deal with the issue of getting stressed by the tempo.

One thing that can get very stressful in higher tempos is the tempo itself. You start playing the song but it seems like you are in hyperspace and there are 250 chords every second.

Coupled with that you are trying to feel the beat and stomping your foot 250 times per minute for the entire 12 minutes of the song and your foot is getting tired, in fact, your leg feels like it is going to fall off.

Instead of doing this, you need to start feeling the tempo slower. This is also what I heard from a lot of teachers like Barry Harris or my guitar teacher at the conservatory Eef Albers.

Depending on what you find easier then it makes sense to start feeling either half or even a quarter of the tempo, so just the half notes or even just feel a bar as a beat. That way you make sure that you don’t have to spend energy on counting or tapping your foot. At tempos like this then the beat becomes a subdivision and you want to feel it like that as well, also because it makes you a lot more flexible in terms of playing quarter note triplets or just floating on top of the groove without getting lost.

It is fairly easy to realize that it is less effort. If you hear all the beats it is this: (play all 4) compared to hearing it like this (play on 1)   (8 bars of Cherokee)

It is important that you are thinking about where the music is going and that you are ahead of where it is now so that you are not falling behind, you don’t really have time to think about what scale or arpeggio to play on the chord that is happening now, then you will be too late.

This means that you need to really know the song, and you need to be aware of what the next chord will be.

When I do that then I need to think about the chords in that tempo, and that is just too fast, it needs to be already in your system so that you can improvise over it and you probably do that playing chunks that you can connect, which is also clear how Coltrane’s solo on this works.

Whether putting together phrases like this is actually improvising is sometimes up for discussion, I remember seeing a Twitter thread from Ethan Iverson about this a few weeks ago. If you are on Twitter you should consider following him, because he posts some really interesting observations here and there!

If you are used to playing towards target notes then that is a huge help here because you are naturally training to think about the next chord, and you are less likely to get stuck with a chord where you have to think about what to play. As I said In this tempo that is – always – too – late.

A Strange side effect

While I was getting better and better at playing lines with alternate picking, I started to notice that I was not really happy with how my phrasing sounded. Everything was clear and articulated, but it was lacking some dynamics within the lines. I missed hearing some notes pop out of the lines. It took quite some time to figure this out.

I was also checking out a lot of Wes Montgomery and Scofield solos at the time, and I started to notice that they both used a lot of legato in their playing. This was not only to be able to play faster phrases, even if that was also a part of the reason, it was also something that was a part of the phrasing, so a part of how their lines sounded. I wanted to get more of that into my playing, and I realized that I needed to focus less on only using alternate picking all the time, and instead try to find a different way of executing the phrasing I wanted, mixing in especially legato techniques. The way I have mostly approached this has been about listening to how I hear a phrase and then try to play it with a technique that gives me that sound.

for example, If you listen to this phrase: 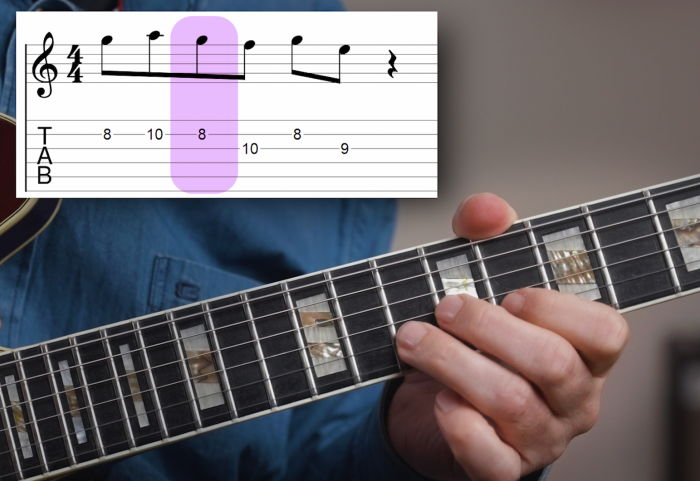 and compare it to this 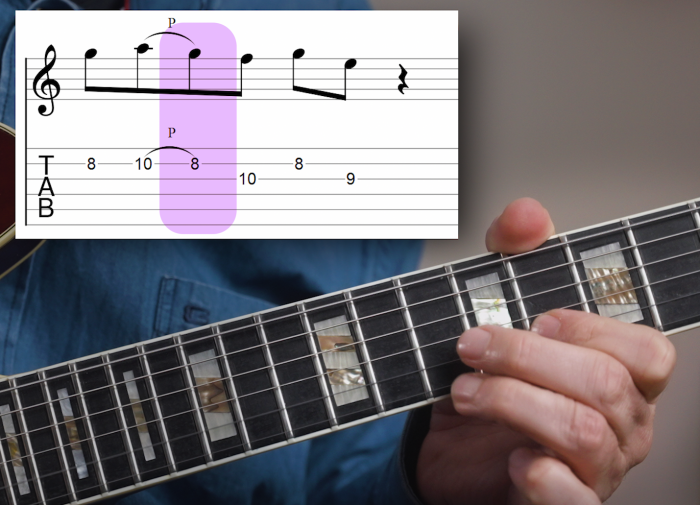 you can hear that even if I make the G very soft with alternate picking then it is a different sound compared to playing it with a pull-off because the difference is not only volume, it is also the attack and the quality of the tone, and a bonus is that playing the phrase using the pull-off makes it a LOT easier for your right hand.

This combination of phrasing and technique can be a bit of a puzzle, but it is both effective and, for me, sounds much closer to what I want it to sound like 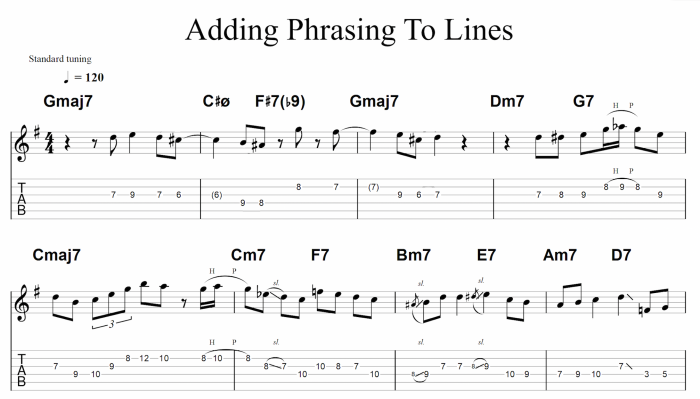 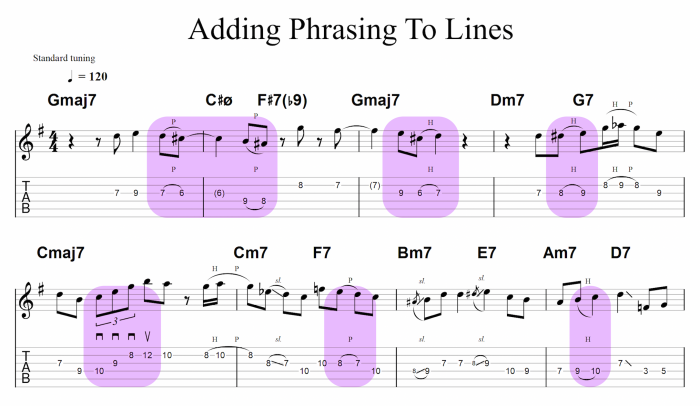