The triad is one of the strongest melodies that we have. It is a part of so many famous songs that it makes sense to work on using triads when playing a jazz guitar solo.

In this lesson I will go over the triads you can use for all the chords in a 12 bar Jazz Blues in the key of F. I also will talk about how I use some of these triads in a solo that I played and transcribed. At the end of the lesson I will also go over some exercises that are useful if you want to be more flexible when using triad based improvisation.

Getting started with Triads

The first thing we need to do is to find some triads for each of the chords in the 12 bar blues.

The chord progression is shown here below: 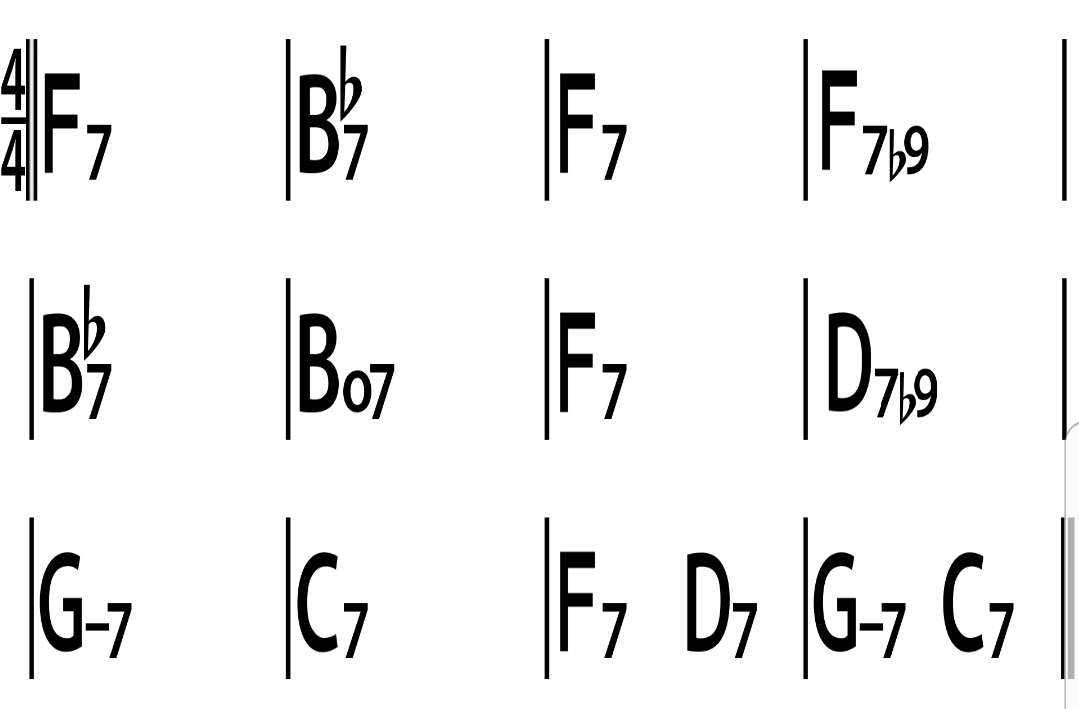 In this next part of the lesson I will quickly go over the different triads that we have available.

Finding triads for the I and the IV chord

In the blues the I and the IV chord, in this case F7 and Bb7, are more or less identical. They are both mixolydian sounding dominant chords.

The triads that we have available are found on the root, 3rd, 5th and 6th of the scale:

Using Harmonic minor to pull to the IV

On the F7 in bar 4 I have an F7(b9) which is there to pull even stronger to Bb7 in bar 5. The scale I am using on this chord is F mixolydian b9,b13, also known as Bb harmonic minor.

The triads we get from this scale are:

Triads for the #IV dim chord

On the #IV dim in bar 6 I use the C harmonic minor scale. This scale is both close to the F7 chord and contain the  B diminished chord.

A secondary dominant resolving to minor

The D7 in bar 8 is an auxiliary dom7th chord used to take us to the Gm7 in the final cadence of the blues.

The II Chord in a major cadence

On the II chord I have three triads. Just the basic triads found on the root, 3rd and 5th:

The C7 in bar 10 is an altered dominant. The C7 altered scale is the same as Db melodic minor and the triads we can find here are a little different than those on the other chords:

Guitar Solo with only triads

The solo is written out here below. In most of the bars I am only using one triad so it should be fairly easy to follow.

The first bar is using the basic F major triad in 1st inversion. On a blues you can easily use the triad on the root, and in fact this is a very good triad to get the blues sound across.

On the Bb7 in bar 2 the triad used is again 1st inversion. Here I use the triad found on the 3rd of Bb7: D dim.

Returning to the F7 the triad used is Dm. The Dm in bar 3 is “voice-lead” into an Eb dim triad in bar 4. The Eb dim triad is a great to get the F7b9 sound across.

In the Bb7, Bdim F7 section in bars 5-7 I have an alternative progression that makes sense in another way that the chords move under it. The triads use are F minor, F dim, and F major.

In the final cadence in bars 9 and 10 I start to use more triads per bar. On the Gm7 it is a combination of a Bb major and a G minor triad. The C7 alt combines Gb major and E augmented triads.

The two triads on the C7 altered chord actually form a triad pair because they don’t have common notes. You can look up more of my lessons on triad pairs here: Triad Pairs 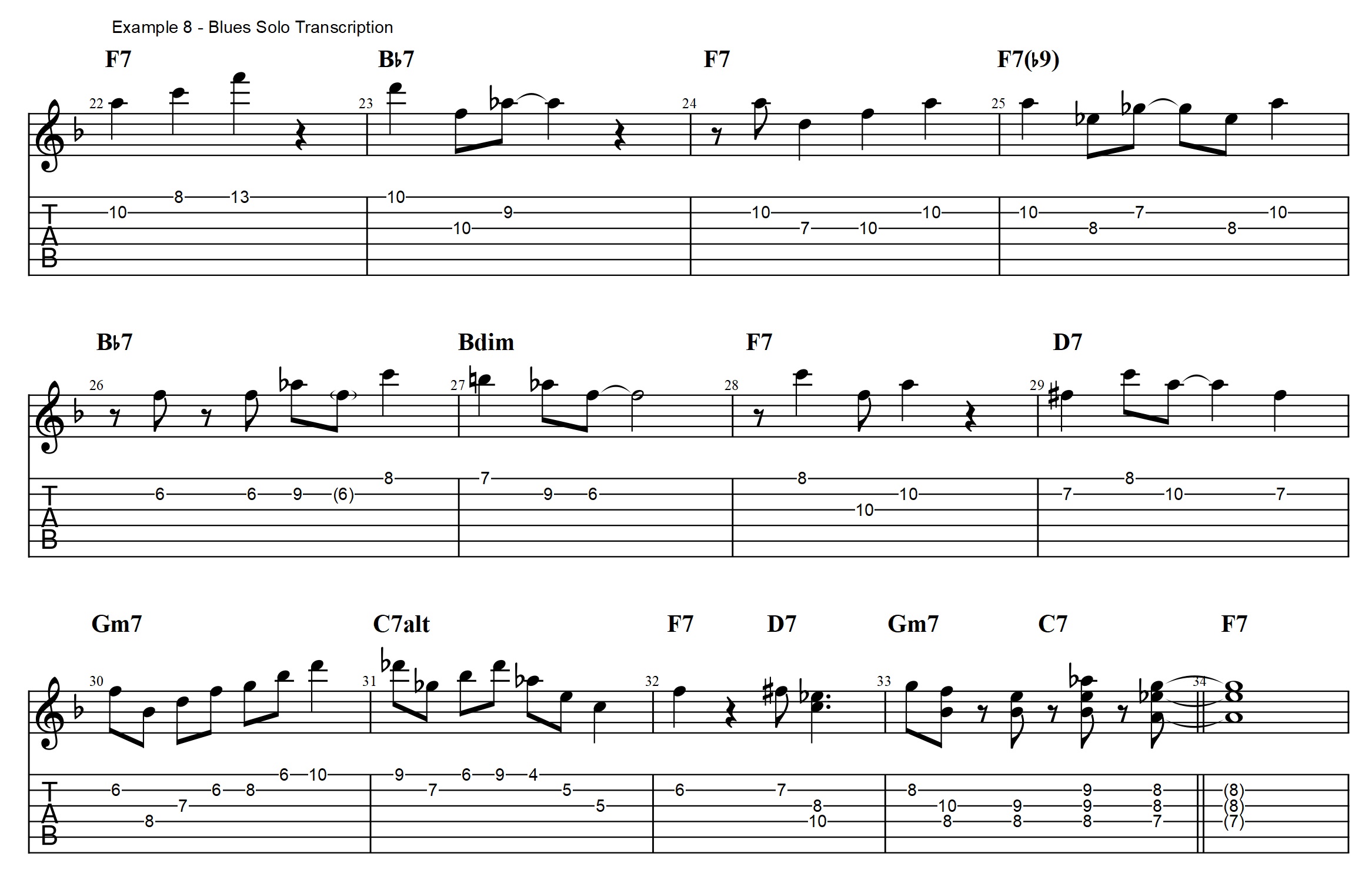 Getting more rhythms down

I will probably make a video on this approach at some time, let me know if you are interested.

Getting more flexible and opening up your abilities with the triads

As you can probably see I don’t only play the triads in root position from the root to the 5th, and there are a lot more ways to make melodies with them.

To get more options when using the triads I have included a few exercises that you can work on.

This first exercise is to just simply play the diatonic triads through the scale. This is important to be able to find the different triads for the chord and of course also to be able to play them in the context of the scale where the underlying chord is found.

To build a bigger overview I would recommend that you also check out the other inversions as well. Here are the 1st inversions of the diatonic triads

and the 2nd inversion:

Besides having the overview of the diatonic triads in a position it can also be very practical to know the triad in this position as shown here below.

Another useful exercise would be to play the position version of the triad  in inversions.

Adding the triads to your vocabulary!

Of course the example solo in this lesson is a bit radical in the sense that while it can be useful as an experiment to work like this and see what you can come up with. In the end you want to work on the process of finding the triads and you also want to try get used to make “alternative” chord progressions that you can use for solos.