Ever since I heard Joe Pass play walking bass and chords behind Ella Fitzgerald, I was completely sold and found that to be the ultimate way to comp in a duo. Something that I then also spent a lot of time practicing and later putting to use on gigs.

Comping like that with several layers happening at the same time can be a bit tricky, so in this video, I am going to show you how to develop it, what to pay attention to and how to practice this type of playing and even take it one step further.

The best place to start is by first constructing a bassline and then add chords under it.

The way I learned this was by transcribing walking bass off albums, but you can actually construct them pretty easily using a few guidelines.

Keep in mind that working on this is actually also very useful for your soloing, because like a great solo line, then a strong walking bass is moving forward and has momentum towards the next chord.

When you play walking lines on the guitar then you are only using the two lowest strings, E and A, which is also going to make it easier to add chords later since that is where you generally place bass notes when you play Shell voicings, Drop2 or Drop3 voicings, and you have plenty of string to add the chord while you play the bassline.

For this video I am going to use a basic progression, just to have a few different things to work with so I am using: Cmaj7 Em7 A7 Dm7 G7 Cmaj7

Before you start just improvising basslines then it is useful to know how to compose them, and that is pretty easy to do.

For now, you can focus on having a walking bass that moves from root note to root note, so let’s add those and then use that to construct the rest:

For the bass line to really connect with the chords and be clear then I have the root note on the first beat and for the chords that last one bar I have also already put a chord tone on beat 3, for Cmaj7 G, Dm7: A and G7: D. That is an easy way to get a bass line that really sounds like the chords. You can also use the 3rd on beat 3, it just has to be a strong basic chord tone.

For now, I am only using chord tones and diatonic notes to go from one chord to the next, and mostly I will use chord tones, again this is because you want a bassline that really sounds like the chord.

For the Cmaj7 bar, here I can easily go from C to G by adding the E in between, and to go from G to E on Em7 then F is an obvious diatonic passing note, just walking down the scale.

On Em7 then B is a great option for a chord tone to take us to A on A7. You could have used G as well, but B is closer and easier to play. In a similar way the 3rd, C#, works to takes us from A to Dm7.

With Dm7, I need to move down to A, and the 7th, C is a good option there. Moving to G is done by just going down the arpeggio to the low 3rd: F.

The G7 is using the triad, and here you can reuse the 3rd, B, as a leading note to C

Adding chords to a bass line like this is pretty simple. I am going to start with some easy shell-voicings and just add them around each chord change:

Before we start adding chromatic passing notes and chromatic chords, then let’s just have a look at what is going on: All I do here is to add the rest of the chord whenever the chord changes, so

On the G7 you have a delayed chord which adds some more syncopation and energy to what is going on and this is something you want to explore as well and that you will see a lot more of later in the video.

Learn Shell-voicings (and be a Happy Jazz Guitarist)

As you will see then most of the chords in this video are either directly shell-voicings or derived from shell-voicings, and if you want to see how much you can create starting from this easy and basic structure then check out this video.

Until now the bassline was using either chord tones or diatonic notes, but since the point of a walking bass is to keep the music moving then adding some tension with chromatic passing notes is a great thing to do as well. So let’s add that and also some variation in the rhythm:

So this is roughly the same bassline, but now, there are a few chromatic notes in there as well:

I have added a D# as an 8th note to lead to E on Em7 so that is both an extra leading note and a more active rhythm. In the next bar, you also have the Bb and the Eb leading notes.

As you can see then I add the leading notes before the chord change to add some extra forward motion, that extra tension that is then resolved when you get the root of the next chord.

On the Dm7 then the Ab is now taking us to G which is actually easier to play than the F. The G7 bassline has a Db on beat 4, and here this is also harmonized with a chromatic passing chord: Db7 which then resolves to Cmaj7.

As you can hear then you can also add complete chords as ways of making things move more or be more exciting. Let’s add a lot more of those and also add some more color to the chords.

Here I am adding notes to most of the chords, giving the dominants 9ths and 13ths, and really just adding color to the sound.

I also harmonize some of the leading notes. Since the point of a leading note is to create tension that is resolved then harmonizing it with a dominant chord is often a very good idea as you can see on the Cmaj7 bar where I am harmonizing the F bass note with an F7 that then resolves to Em7, or turning the Ab bass noted turning into an Ab7 that resolves to G7. 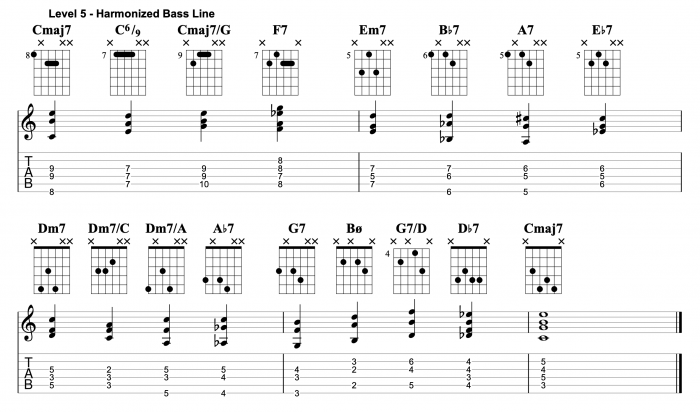 Here you are harmonizing every bass note with a chord and using inversions and other voicings to connect the whole thing. Most of the time I simplified the chords a little because it gets a bit busy if they are all 4-note chords with a lot of notes and complicated sounds.

You can find some great examples of Jim Hall playing like this, and Joe Pass also does this in some places when he is playing with Ella. Often when you do this you also use more chromatic passing chords simply because that is practical instead of changing voicings all the time, but that also depends on the tempo.