This lesson will show you 5 different ways that you can play some beautiful outside things on a static m7 chord, not just what to play but also how to use it.

If you are soloing on a static chord then a great way to make your solo more interesting and surprising is to play something that really rubs against what the listener expects to hear.

But you can’t just play random notes, it still has to make sense and sound like a melody, and that is what you will learn with some different strategies in this video

The examples are all on a static minor 7 chord, and the first few examples use different chords on top of the harmony and then later I will cover some other strategies and how they sound.

A great place to start is by moving everything a half-step down, often referred to as side-slipping or side-stepping. This is easy to work with thinking wise and you can use the same position and material while still sounding great. First, let’s check out how that sounds, and then I will show you how to get the melodies to connect and make sense, both going into the outside section and also coming out of it. The backing is a static Cm7, so the side-slip will be a Bm7.

The first part of the solo is just using the Cm Dorian sound, just so that we have a sense of what home is, then I transition to Bm7 by using the parallel motion of the arpeggios, first I play Gm7 and Ebmaj7 arpeggios and then I use these as a motif to move down to a Dmaj7 arpeggio thinking Bm7. The solo really sits on the C# to create tension and then I go back to Cm7 by playing the Ebmaj7 arpeggio rounding it off with a blues phrase.

How and Why Superimposed Chords Work

So I am really treating it as a chord change and connecting across the chords with motivic development. In that way, the melody makes sense and is not random, I am using the same logic to make melodies with Bm7 as I do on Cm7 and it is practical that it is the same chord.

This is true for more of the examples in this video, but some can be used differently as well, like the next one.

The only thing you need to be careful with when you connect with motifs is that you don’t make the motifs too obvious, that sounds predictable and unnatural, but that is the same as when you use motifs in your solos on changes.

You can also use altered dominant lines on top of the chord to make your solo sound more surprising. As you will hear, this creates tension and movement within the solo in a very natural way. For the Cm7 then the altered dominant is G7alt, and the G altered scale is the same set of notes as Ab melodic minor. There is a really big advantage to using the altered dominant for this and I will explain in a bit.

In this example, I first set up the Cm sound with some Dorian and Cm blues and then transition to the G altered scale and play a typical G7alt line using the diatonic arpeggios Fø and Bmaj7(#5). These are arpeggios I would normally use for that chord so you can use the material that you already know. The transition back is done by simply sliding down to resolve from Ab to a sustained G, ending with a Cm pentatonic phrase. If you are looking for more things to play on Altered dominants then I will link to a video on that in the description of this video.

For the altered dominant scale you can also get the melodies to work with more scale oriented melodies, which is a simpler way to make melodies and a nice addition to your playing:

Here I set up Cm quickly before moving into the G7alt line that is essentially just an ascending scale that then resolves back with the scale played in 3rds.

Next, let’s have a look at what is probably the most common outside suggestion you come across.

Moving up a half-step is a common way to create some outside sounds, and similar to the first example, an easy way to get there and you can use the same material you are already playing. The example I am using here demonstrates another way to move smoothly into the outside part of the phrase: A Pivot note 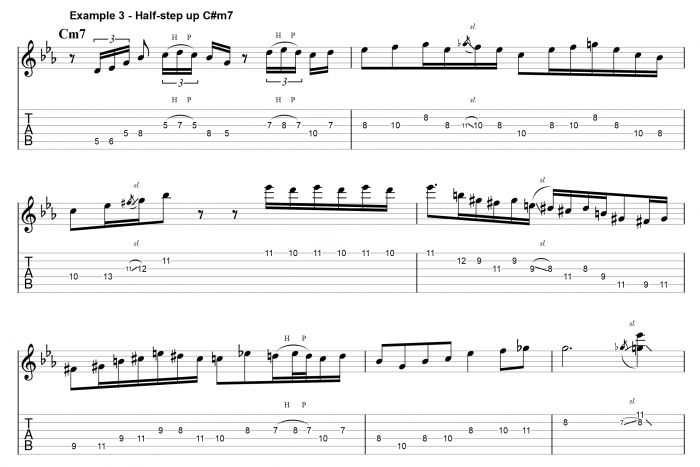 The beginning of the example setting up the Cm7 is a little more extensive here, and with more rhythms. Moving up to Cm7 is done by using the Eb as a pivot note. A pivot note is a note that is in both chords, Cm7 and C#m7. It is the 3rd in Cm7 and the 9th on C#m7, and the melody starts out using it as the 3rd of Cm7, and then it turns into the top-note of a descending arpeggio on C#m7.

The solo goes back to the Cm7 by simply shifting down a 3-note scale fragment, so just C# D# E, first a basic version on C# and then a more embellished version on the Cm7.

Next, let’s have look at a completely different sound and approach to creating outside lines.

There is a great trick to using C diminished as an outside sound on a Cm7 chord.

You have a connection with the Cm scale:

Because you have a lot of common notes, but you also have some “funny notes” like the F#, Ab, and the B. 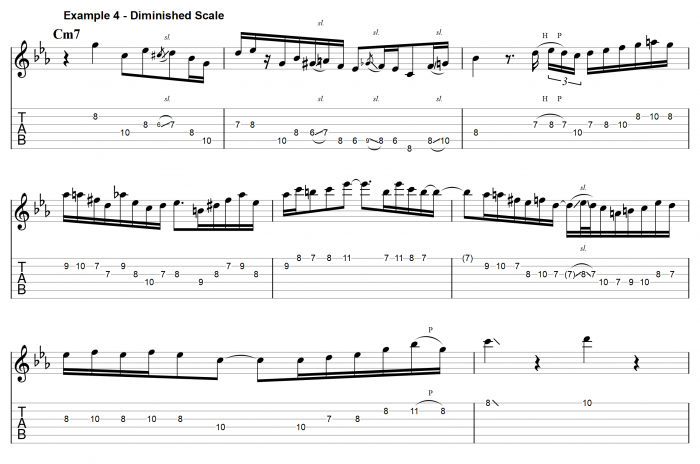 The trick is that you can use the major triads of the diminished scale to improvise with and shift those around to create some strong and interesting melodies.

All the triads contain very strong colorful notes on over Cm7 and since they are triads you can easily use them to create interesting melodies.

In example 4 I use the D, Ab and B triads together to create a melody which sounds like shifting colors on top of the Cm chord.

In this example the 4 triads don’t really “belong” in the sound of the chord, but we have another less common sound that can actually shift in and out of the chord sound in a similar way, that is the next thing to check out:

The augmented scale is a 6-note scale:

You can se it as either two augmented triads next to each other:

or, what is practical in this case, you can see it as 3 major triads in major 3rd distance:

In this case, I am making a link to Cm7 by using the Eb major triad which is the upper structure of Cm7, and then create lines by mixing the 3 triads in different inversions: 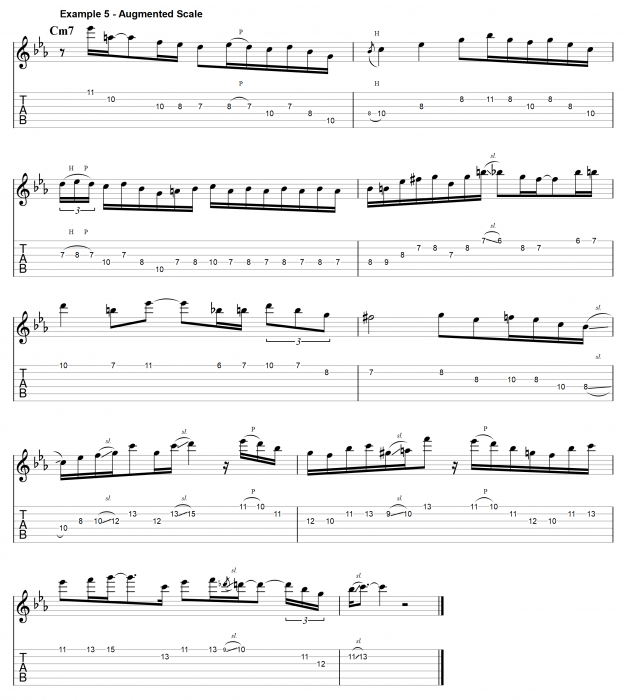 In the example you hear how the line moves to the B major triad and then to the 2nd inversion G major triad, plays some more scale-based melodies before returning to Cm7 by resolving the F# to G.

Melodies like this are something you hear a lot in Michael Brecker solos.

There is a trap that you can fall into when it comes to practicing. Usually, we spend a lot of time learning songs and trying to hit the right notes in your jazz solo, but it can be very a huge problem if you only take your playing to that stage. That is not where the music is, there is a lot more that you need to develop to sound great when you are improvising, but most of it is fairly easy to improve if you are aware of it and focus on it in your practice routine, as you will see in this jazz guitar lesson.

06:03 Telling Better Stories in Your Solos

08:30 This video didn’t teach you anything

If you have any questions, comments or suggestions for topics then, please let me know. Leave a comment on the video or send me an e-mail. That is the best way for me to improve my lessons and make them fit what you are searching for.