Triads and Spread Triads are invaluable as tools for making jazz lines, especially in the realm of more modern sounding melodies. The video is in three main parts: An analysis of the chord progression, Finding triads that can be used and discussing outside or exotic scale choices, and finally making lines with the material and talking about the colors of the superimposed jazz guitar triads. How to make guitar licks and what rules come into play when using triad pairs and spread triads in jazz guitar solos.

This video turned out to be a lot longer than I thought, but especially the ending I think is a good documentation of how I write lines and you see me experiment with the material I find through the analysis and the triad options.

There’s also a lot of good discussion on melodies and how you write strong melodies with material like this.

1:01 Analysis of chords and form
1:28 Key and form
1:56 The Chords and their function
2:14 The mysterious Eb7 German Augmented Sixth Chord
2:43 The Double Diminished #IV explanation
3:45 Back to the Harmonic Analysis
4:49 How Out Of Nowhere is about Eb7 in G major
5:46 Analysis of The 2nd half of the song
7:02 A modal aspect of Out Of Nowhere
7:46 Why Triads and Diatonic triads are so great for solos

Finding Options Triads for the chords

It is very difficult to find a melodic way to use larger intervals. At the same time if you just stay with 2nds and 3rds the solo can become a little boring. In this lesson I will go over 3 ways that you can play an arpeggio that will help you get some large intervals into your lines and still sound like a logical melody.

In modern Jazz it the range of arpeggios that we use is quite extended with not only the normal 7th chords and triads but also quartal harmony and open voicings. Using the 3 approaches that I cover here you can get a lot of new melodies out of material that you probably already know.

You can find the video via this link if the embed doesn’t work: Click here!

In the examples I am going to assume that you already are familiar with diatonic arpeggios and have some experience with improvising with them over progressions like a II V I cadence.

All the examples are on a II V I in the key of F major, and I am using an altered dominant to have another type of chord and scale to use the material I am covering. If you want to check out some more more about altered dominants and reference some of the things I mention here you can check out this lesson: Three Approaches to the Altered scale

The Drop2 voicing, a great 4 note arpeggio beyond the octave range

In the first example that I play in the beginning of the video I start with a Bbmaj7 drop2 voicing as an arpeggio. Using drop2 voicings is a great way to add a big range to your lines because a drop2 voicing has a range between a 9th and an 11th.

It should not be a huge mystery that Bbmaj7 works over a Gm7, since it is the arpeggio from the 3rd of Gm7. The arpeggio is followed by a quartal arpeggio from A. On the C7alt the line is constructed from two diatonic triads: Ebm and Ab. The line then resolves to the Maj7th(E) of F.

To get used to playing drop 2 voicings as arpeggios you can try the exercise shown in example 2. This is basically the F major scale in diatonic 7th chords on the middle string set.

Another way to work on the voicings in a more focused way is to take 3 arpeggios associated with Gm7: Gm7, Bbmaj7 and Dm7. This is shown in example 3

Example 4 is another example of how you can use Drop2 voicings in your lines. Here I am using first a Dm7 drop2 voicing followed by a small Gm scale run. On the C7alt the line is just two Drop2 voicings: Gb7 and Bbm7(b5)(11).

Another great structure that we can employ is the shell voicing. A shell voicing is a chord voicing consisting of root, 3rd and 7th. You could also construct a root, 7th, 3rd version, but that is a bit more tricky to get to sound good in a melody.

One of the great things about the Shell voicings is that they have a 5th interval on top which makes them have a nice open signal like sound as a melody.

In the first example I am using the shell voicings on the altered dominant. The Gm7 line is a Dm7 arpeggio followed by a scale run. The C7alt lin is constructed from 2 shell voicings: Bbm7(b5) and Ebm7. Both spell out a lot of good alterations over C7. The line is then resolved to the 3rd(A) of F.

Another exercise could be example 7 where I a wrote out Gm7, Bbmaj7 and Dm7 + Gb7, Bbm7(b), DbmMaj shell voicings.

These exercises are mostly 1 note per string arpeggios so they are also great exercises to develop you alternate picking. You can of course also research some alternative fingerings or use other techniques to play them like hybrid or sweep picking.

The structures that we can use are not only based on 7th chords like the previous two. We can of course also use triads. Open voiced triads are triads where we take the 2nd highest note and drop it down an octave.

Playing a Bb major triad in open voiced inversions could be this:

In example 9 I am using open voiced triads to add some very big intervallic leaps on the altered dominant. The Gm7 line is a basic Bbmaj7, Dm pentatonic line. On the C7alt I use two minor triads that work well on C7alt: Db and Ebm before resolving to the 9th(G) of F.

In example 11 I am showing what is basically the same exercise as example 2, but instead of drop2 voicings it is now with open voiced triads.

In the final example I am almost only using open voiced triads. On Gm7 it is Bb, Dm and F triads. On C7alt Ebm and Eaugmented triads before resolving to the 3rd(A) of F.

I tried to make examples that incorporate this type of arpeggios with the other material that you would normally use in a line. They work best if you don’t only use this one approach. It is more effective if you use it as a surprising thing in the middle of an otherwise strong line. 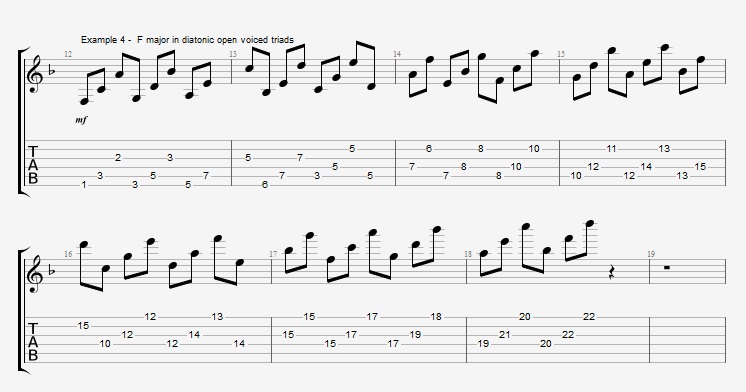 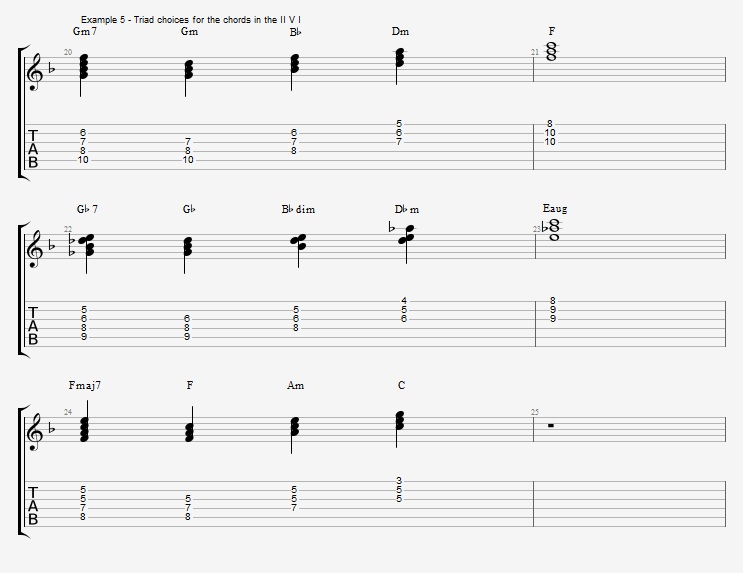