So if I want to be better than Joe Pass, Wes, Guthrie, John Abercrombie, and Barry Harris then I should:

Not read any music, learn theory, never use a metronome, and not learn other people’s solos or study modes!

Be Careful With Advice From Anecdotes

As you can probably hear then it doesn’t make a lot of sense to use an anecdote or a myth as a way of planning your practice and figuring out if something is useful for you.

Simply because the fact that someone else didn’t do something doesn’t mean that not doing that will be useful for you.

You are a completely different person, probably in a different time and with different resources available.

99% of the time I hear these statements used to either make someone sound like a “magic” talent or as an excuse for not practicing something that requires work.

Making artists “magic” is fine if you want to, but thinking like that also means that you are already giving up on learning to play like them or that you think you are magic as well. It doesn’t strike me as a fantastic strategy.

The same goes with using this as an excuse, if Wes Montgomery can’t read music then I don’t have to. but keep in mind that you are NOT Wes or Joe Pass. And Joe Pass not being able to read music does not mean that he was sitting looking at YouTube and commenting “got tabs?” or looking up chords in books with diagrams.

He learned things by ear which is something he trained his whole life.

What you really want to evaluate is whether learning to read music or any other skill, is going to be useful for you. It is not really about Wes or Joe Pass. It is about what you need to learn and what helps you the most.

The argument I will make for why you can benefit from learning to read music is probably different from what you normally hear, but I also think that it is much more powerful.

It Is SOOO Difficult!

I started with classical guitar, so everything was reading music for the first 4 or 5 years, but there was one aspect of it that I was not taught that is incredibly useful.  At the same time, I was reading all the music I was playing so it was never something that it felt like I had to work on that much since that was just how you played guitar. 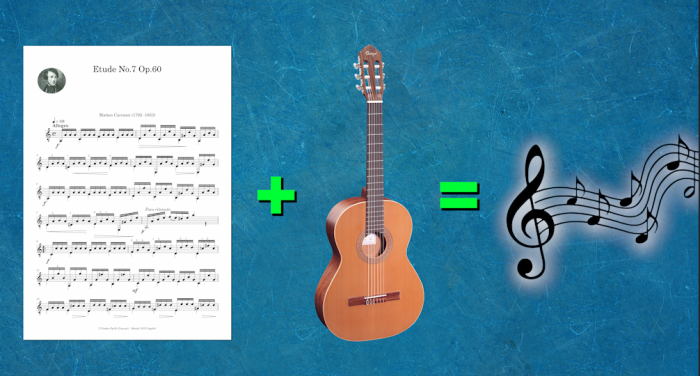 Reading is often taught as a very mechanical process,  and the problem that guitar players usually have is that you can’t just point at a note in the sheet music and then say that is THIS note on the guitar, similar to a piano. On a guitar, you can play the same C in many places on the guitar, but maybe the focus for learning how to read music could be different. Maybe it should not be as much about how you play what is on the page but more about how it sounds. 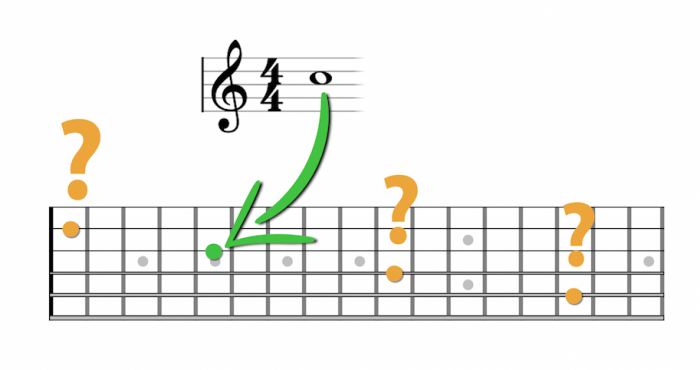 I think it is much more useful to look at the page and then be able to hear what that sounds like, because if you know what it sounds like then you can also find a way to play it. This might sound even more difficult, but for a lot of music that is not as difficult as you might think. Reading music then becomes a part of ear training, and approaching it like that is probably one of the best ways to learn that will also help you with a lot of other things in your playing.

The way you do that is by learning to hear music based on the key it is in which you might discover is easier than you think, mainly because you probably already hear music in that way. 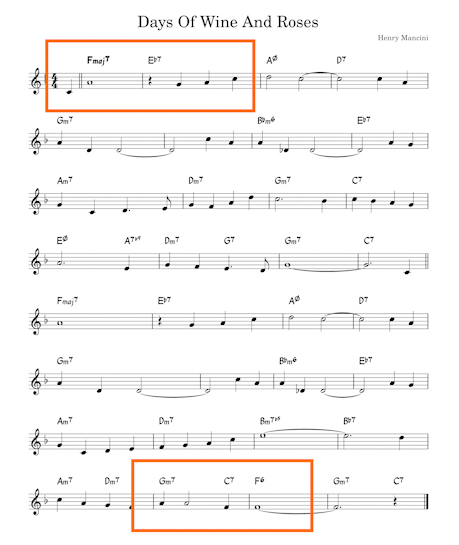 Let me quickly show you what I mean and then also translate that to the guitar.

Let’s say that we are in the key of C. 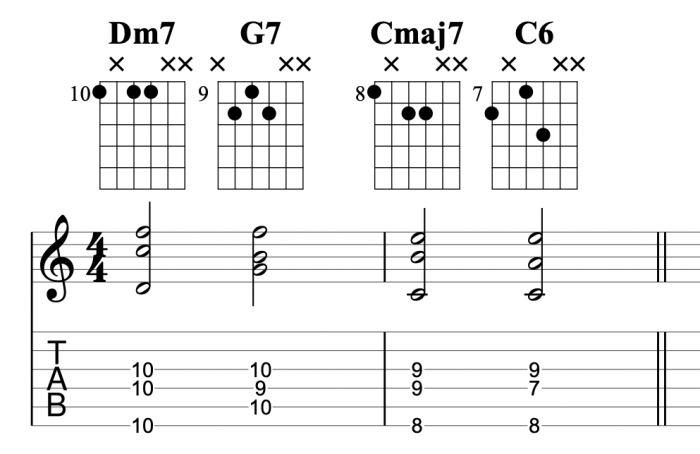 So you hear this as the root: C (play cadence) 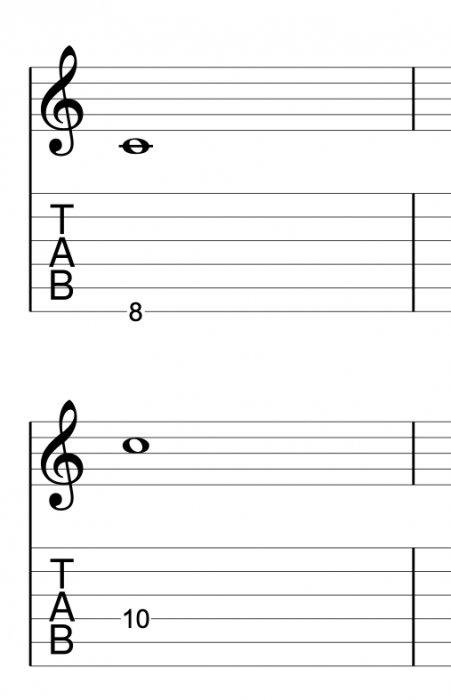 This is the note that we hold on to and use to hear the rest of the notes.

And if you hear C major then you can also hear the other notes, like you can hear a C major triad or notes from the C major scale. 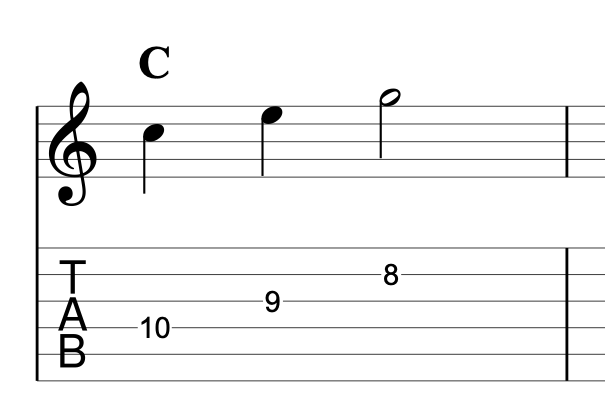 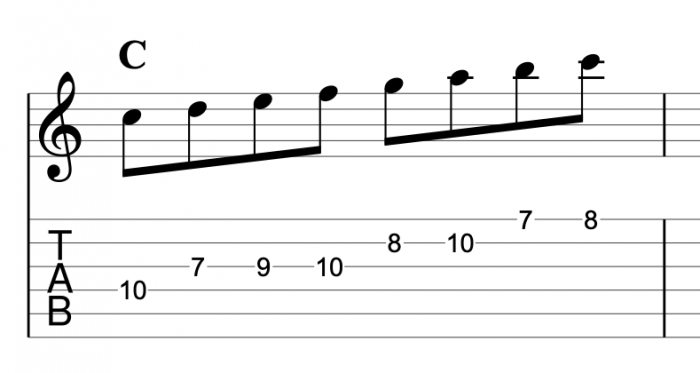 Obviously, this will be something you partly already have and something you want to train and develop, but if you can read in a key like this, then if you have to play something almost only becomes a matter of knowing the scale of the key and then using that to play what is on the page.

Because that means that you can look at this:

And then you actually hear this:

MAY ALL THIS SECTION SHOULD BE REVISITED>>>Example with audio

And that is a very efficient way to learn music or internalize music, and the way music notation is made then it is a much bigger help than you think when it comes to this. This is really overlooked, and one of the worst examples of this is the Omnibook where everything is written out in C with accidentals, probably one of the things that annoys me the most in any Jazz education book.

If you want to have an impression about how that can work then try reading a song that you know in a key that you know.

But hopefully, you can see how knowing the scale and being able to hear the notes in the scale will help you. There is another equally important thing to learn that is a little style-dependent, but which also makes things a lot easier.

First I think we need to discuss something else….

I talked about this in a video a few years ago, and for some reason, people think that sight-reading is the same as being able to read music, which for the most part it probably isn’t, and I think it is useful to make the distinction between the two.

On a side note: It is NEVER written out in tabs, NEVER.

The goal is the same: You need to end up playing it convincingly on the gig, and if that means practicing what is on a page to get it to the point where you can easily play it and get it to sound right. In my experience, it is better to be good at preparing and really nailing your part compared to being good at sight-reading it mostly just because practicing towards really playing it to the best of your ability is just a better strategy than trying to be really good at surviving your way through it.

And it is a different process if you are working on reading music and trying to turn that into a solid performance with good phrasing and timing, instead of trying to become good at just superficially playing through songs you have never seen before. Approaching it like that is the same as trying to learn to solo by improvising with iReal and letting the app choose random songs without actually learning them, that is just way too superficial.

Chunks In My Music

Another useful connection when it comes to reading is that you want to learn to see the notes in a melody as a group of notes rather than reading everything one note at a time.

I guess that is about being able to recognize patterns in a written-out piece of music, but also linking how you probably think about what you play, how you analyze, and how you read. 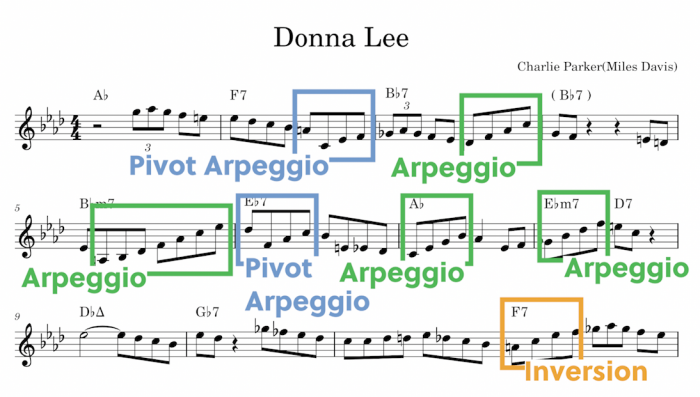 Just like reading a text, t is much more efficient to read words compared to trying to spell everything. I think that is pretty obvious, and the better you get at recognizing the building blocks in the music when you read, the easier it will get. From a technical point of view, it also fits together very well if you read music in a key and you are able to play common building blocks like diatonic 7th chord arpeggios or triads. That is going to make the process of getting the notes off the paper and turning them into music A LOT easier.

What musical words you want to be able to recognize is of course style dependent, but for Bop-inspired Jazz then 7th chords, triads and inversions, chromatic enclosures, and octave displaced arpeggios are very useful. For other styles, you will have other words.

You Don’t Have To Learn To Read Music

I don’t care if you want to learn to read, just to be completely honest. Lots of people have relied on using their ears instead of reading sheet music, as I was talking about in the beginning of the video.

In fact, I am not really that great at reading music myself, because it is not what I do the most, but that doesn’t mean that I can’t read. People always go to the extremes with this. You can either sight-read anything or you don’t know where the middle C is, there is nothing in between. There is a Holdsworth clinic somewhere where you see him get really annoyed that people think he is completely clueless with reading which he is obviously not.

But do keep in mind that knocking being able to read music and suggesting that tabs and diagrams are as useful is, in my opinion, just not true. You already saw how the notation ties in with how we hear and play music. Tabs and diagrams can never do that, and I am sure that you agree that these skills are essential to playing music and you can use reading as a way of improving them if you do approach it the right way.

Let me know in the comments what you think?

At the same time, I would not put reading at the top of the list if you want to learn Jazz. It is useful, also for communicating with other musicians and analyzing what is going on in the music, but learning solos by ear and playing music is more important. Spending a few minutes a day singing music and training your ability to hear a tonality is however not a waste of time, and maybe one of the most useful things you could do.

It Needs To Get Into Your Ear

“Just learn from the masters” is both the worst and the best advice you will get online. Learning solos by ear is a great way to both develop your ear, your phrasing and your vocabulary, but if you don’t get suggestions of places to start then learning a solo by ear can be almost impossible. If you have never learned to play a solo along with the album, then you are missing out, and it really doesn’t have to be that difficult! If you want some suggestions for easy but great solos to start with from Wes, Kenny Burrel, and George Benson, then check out this video!