“Scales Are NOT going to solve problems”

I think sometimes when you want to learn Jazz then it is too much about learning 100s of scales, and that is not really what Jazz is about. There are a few scales and especially one scale that is endlessly more important than the rest.

Scales are not going to solve problems for you. if your solo doesn’t sound good, then learning hypochondrian b6 is not really going to make you sound any better over a Blues in F, and focusing on the scale takes away attention from more important things in your playing like the melody, rhythm, and phrasing.

You are much better off focusing on the most used scale and then really learning that, and this is mainly because

So of course, I am talking about the major scale!

Simply because that is the scale that is used the most, it covers the most ground and contains most of the chords.  It is not the only scale you need, but if you really dig into that then you will sound a lot better than if you try to learn 20 scales at the same time. This is also one of the reasons why I am not a huge fan of modes, but I will return to that later. Let’s look at what to learn and what to practice.

My thoughts on what to practice are heavily influenced by how Barry Harris taught this in his masterclasses in The Hague. That was maybe one of the most important things I learned from him.

Basic stuff that you want to know, but that you don’t want to think about too much unless you are figuring something out.

Of course, just playing the scale makes for some incredibly boring melodies that everyone will get tired of very quickly, so how do you get further? And THIS is a part of why the scale is important because the approach you use on the major scale will make it a lot easier to learn other scales and make that process a lot quicker.

When you improvise in Jazz then the melodies in your solo follow the chords of the song, and if you are playing a song in the key of C major then a lot of those chords are actually in the C major scale, so you want to be able to find those chords. 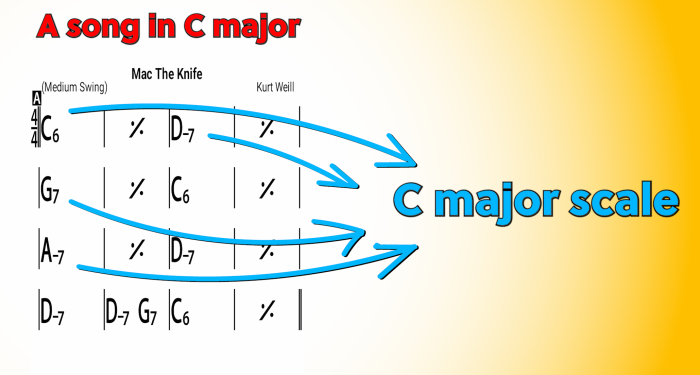 I am going to show you how this fits on a very common Jazz progression, a II V I. But first you need to be able to find the chords.

The Chords In There and the II V I

This  also works for other scales, and is something you want to keep in mind for working on them.

A chord is a stack of 3rds, so if you have the scale then you can construct the diatonic triads by stacking two 3rds on top of each other. 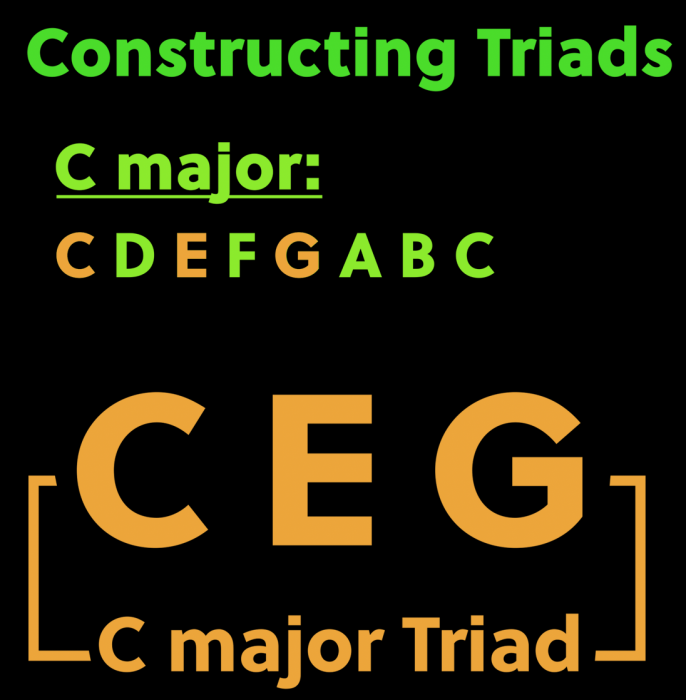 Here you will get:

As you can see below, in Jazz, the basic chord type is usually a 7th chord: 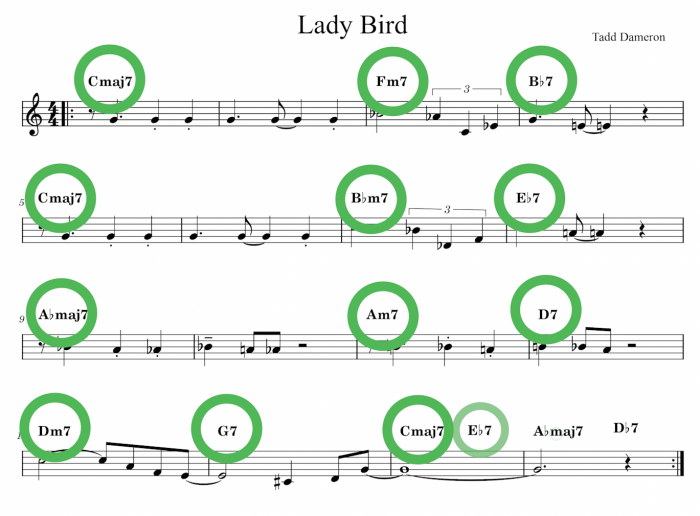 but all you need to get those is to add another 3rd, to get these 7 chords: 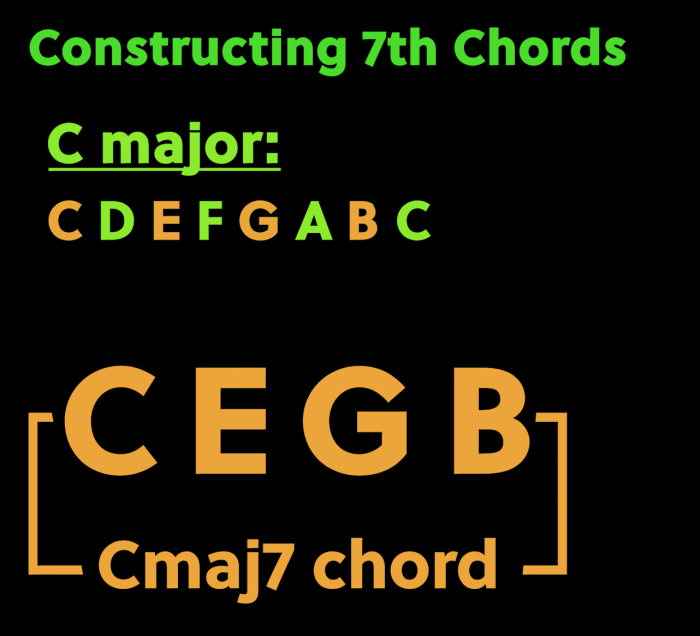 Finding the II V I 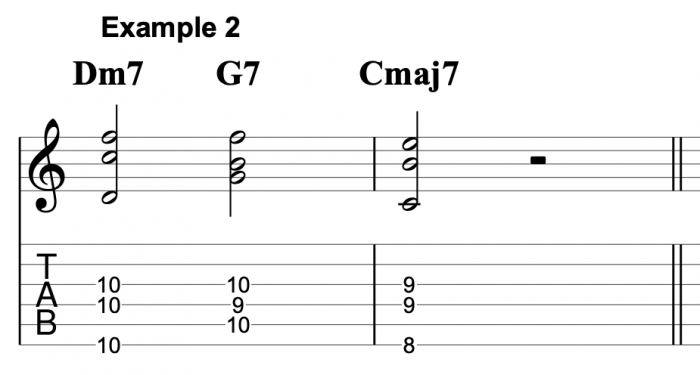 And the II V I progression is very common in Jazz and probably the most common building block in Jazz songs, so it is a very useful place to demonstrate how this works and ties in with the major scale.v 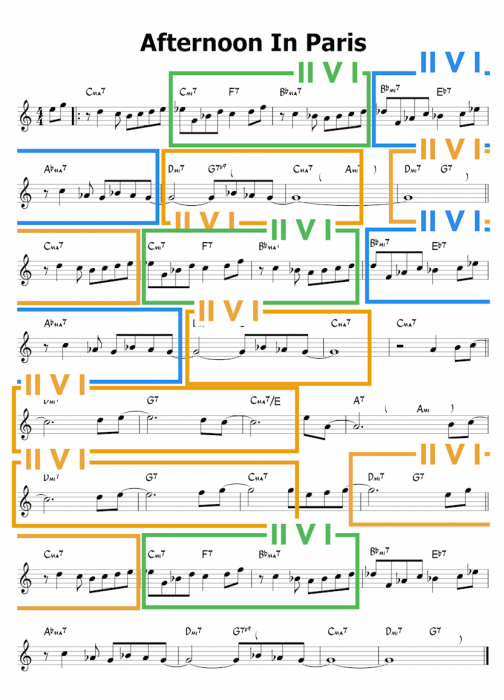 You also want to notice that all of these chords are in the scale, so here the scale is a bigger thing containing and tying together several chords in a song, that means that often you stay with one scale but the important notes change with the chords.

Before I get into what exercises to focus on and the Barry Harris thing, then it is useful to look at what you actually need from the scale when you solo.

As I mentioned earlier, when you improvise in Jazz then you follow the chords, and you try to make melodies that make it clear what is happening in the chord progression. The easiest way to do that is to play the notes of the chord, which is what we call the arpeggio. 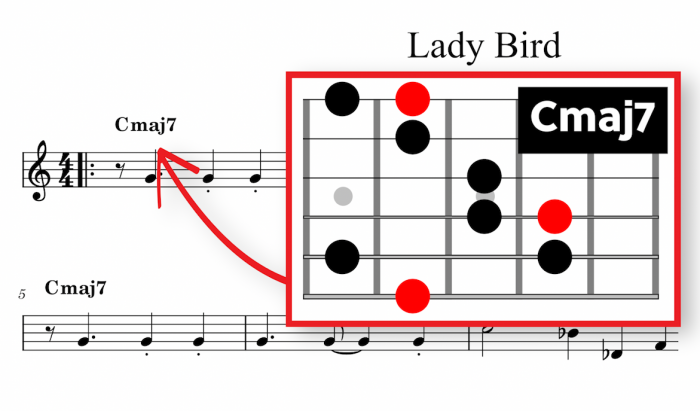 If you turn the row of chords for C major into arpeggios then you can easily play that through the scale and get some raw material for soloing:

and if you then take the 3 arpeggios of the II V I then you would have something like this:

This still sounds like an exercise, but already if you start being creative with the order of the notes you can turn this into something that sounds more like a melody, something that has a flow moving from one chord to the next:

And of course, the scale sits under this, and you can also use those notes when you solo as you take this further.

How To Really Internalize The Scale

So you already have the exercise that is playing the diatonic chords in scale. Another very useful option is to learn the diatonic triads which as you will see in a bit is great material for soloing as well, and then we can get into some of the Barry Harris-inspired exercises.

And the notes of the 3 chords in the II V I are these:

What you want to realize is that the top 3 notes of each chord is a triad, and that means that you can use F major, Bdim and Em as material when you create lines over a II V I: 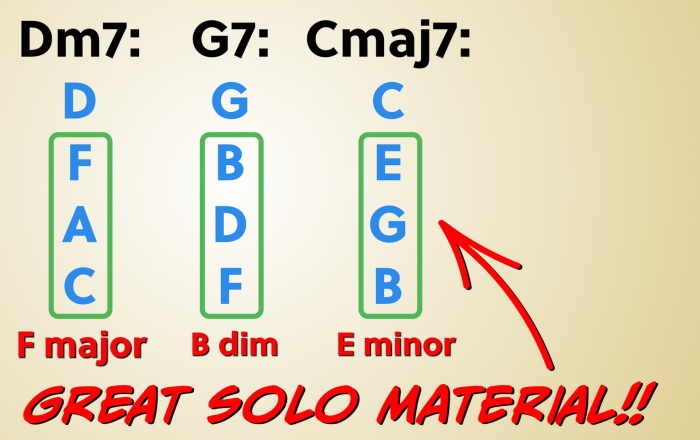 So for soloing it pays off to know your scale, to know the diatonic 7th chords in the scale and the diatonic triads, and it is practical to know what notes are in the chords because that helps you connect other arpeggios and triads to a chord, and it is fairly clear that this is important for almost any scale you want to use, not only the major scale.

But, these are all the basic things to give you an overview of the notes, the harmony, and how it all fits together. Another important thing to keep in mind is that you want to use this for solos, and that should be a part of coming up with what you practice!

One of the things that really changed how I practiced after I had attended my first week-long Barry Harris masterclass in the Hague was a smarter much more efficient way to practice scales.

Several times in the masterclass while Barry had taught us bebop lines and explained how they worked, he had also taken a building block, or a piece of vocabulary, and turned it into a scale exercise.

This direct connection between what you wanted to play in your solos and what you should practice in your scales makes scale practice much more efficient.

I will go over some of the more advanced ones as well, but the basic example that you have probably heard me talk about before is playing the diatonic arpeggios as triplets with a leading note, which is sort of instant Charlie Parker:

Another great exercise that Barry used was pivot arpeggios, so an arpeggio where instead of just playing the ascending arpeggio then you play the first note, and then move the rest of the arpeggio down an octave: 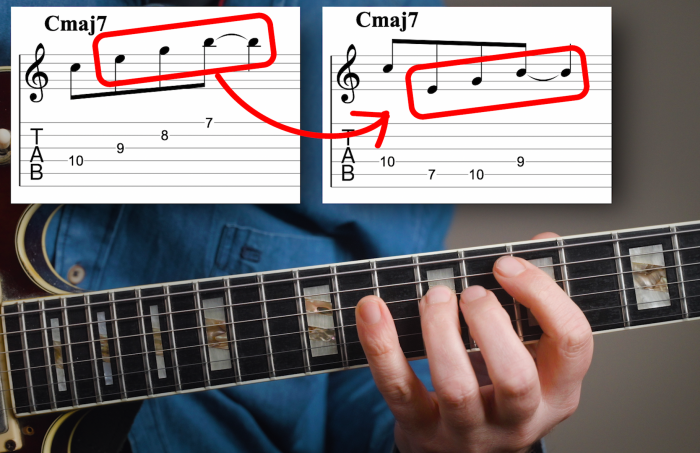 You can turn that into an exercise like this:

And if you take the last Cmaj7, and just add a few chromatic passing notes then it immediately becomes a great Bebop phrase like this:

And this is where it starts to get really interesting because you really turn anything you like into a scale exercise and then explore how it is to use the same idea or melody on other chords.

As an example you can combine the pivot arpeggio and the triplet with a leading note concept and then create a short building block like this: 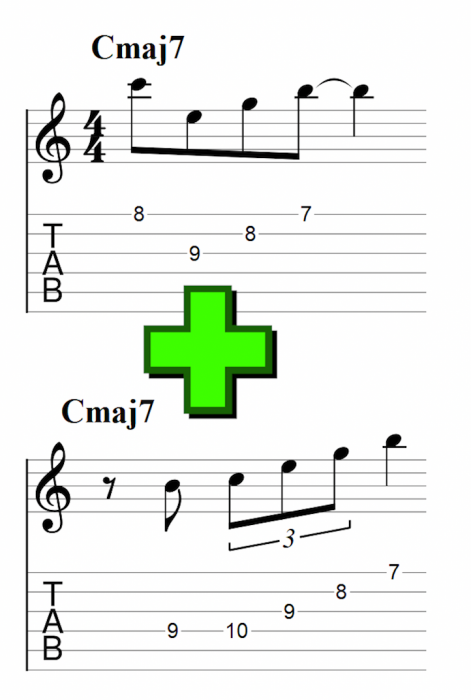 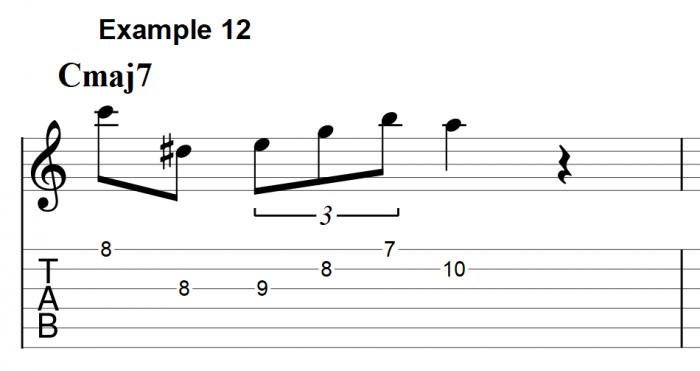 As you can see it is not a systematic way to combine the pivot arpeggio with the triplet, but it sounds great, and it will work really well in some Bop lines, but first I’ll take it through the C major scale:

And then if you take the Fmaj7 version and use that on a Dm7 you can get something like this: