Triads are essential building blocks in the strongest solos and melodies, and you want to make sure that you not to miss some of the great ways they can be put to use. 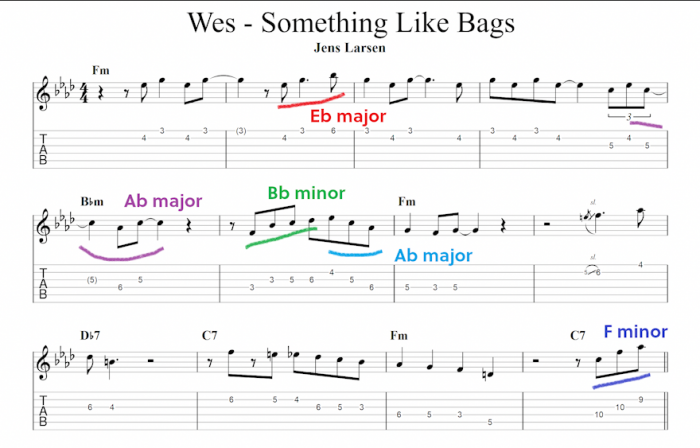 You already know that even though Jazz is mostly using chords with a lot of notes and extensions then triad melodies are still incredibly strong and something that should be a core part of your playing.

Or classical music – Mozart or Beethoven

The triads are always in there and they should be in your playing as well.

Getting Your Triad Practice Right

There are probably two ways that you are practicing triads:

In positions, playing the triad across a position, hopefully visualizing or keeping in mind what scale it is found in (voice-over)

This exercise will help you find all the triads in the scale and give you an overview of the harmony.

Both of these are great ways to work on the material, but not directly help you use them in solos and what is more important: a lot of very useful triad melodies are also left out, so let’s fix that.

Practice All The Melodies

One of the most common triad melodies both in Bebop themes and solos is the 2nd inversion triad. You have clear examples of this in Anthropology.

And the 1st inversion major triad is also great for solo lines like this:

So if you are not practicing those then you are leaving A LOT of great melodies out of your vocabulary.

It is not that difficult to get used to playing the inversion so that you can start incorporating them into your playing, and actually it is also a great exercise for your ear, and the connection between what you hear and what you play.

Incorporating the inversion into a triad position would mean playing it like this:

But working through the triad inversions in a scale position is a great exercise for quite a few things:

So of course, just playing these is already giving helping you be more flexible with what you can play in the scale, but it is also introducing some string skipping,

but maybe the most useful part of the exercise is that you take a predictable 3-note melody and then try to play that through the scale.

When I start working on this then I am not really thinking about which notes or which triad I am playing, as much as I am hearing a melody and then hearing it move up through the scale. This may sound a bit vague, but it is actually a great exercise that will help you become better at playing melodies by ear. If you have never tried this before then take 3rds through a scale, and notice how your ear will tell you if you are playing the right notes or not.

Now that you know the triad and the inversions then you want to start getting this into your playing.

The Power Of Simplicity

An important part of how we use triads in Jazz is as upper structures, mainly because it ties together extensions in a strong sound and make the chord or melody make more sense, similar to this line

and I will talk about how you can use triads like this later in the video, but this is not the strongest melodic tool when it comes to triads. 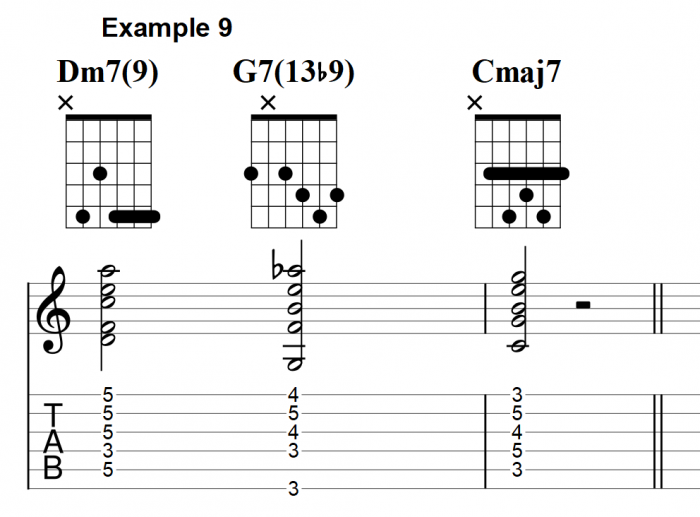 The first thing you want to do is to become better at making lines based on the basic triads and then really get good at using those in a creative way so that your skills are already in place when you move up into the thin air of more tricky extensions.

If you think about the Charlie Parker Lick from Billie’s Bounce that I used in the beginning then that is using an F major triad over an F7. Another way that Parker uses the F major triad is in the opening of the solo:

So, as you can see, it really pays off to start making lines that are using the basic root triad and also do more than just play it up and down, but use it as a skeleton for the melody you want to play.

For example, you can use scale notes as passing notes as I do on the Dm7 and the Cmaj7 here:

And because the triad is such a strong melody then you can also change the order of the notes and skip around more, as I do on the Dm7 here:

So if you find something that works, like the Dm triad melody here then try to explore using it in different ways like playing it backward:

Or explore how changing the order of the notes sound:

There are some great melodies in there for you to discover.

The easiest way to start doing this is to play the triad and then add a scale note between the notes in that inversion:

This is just how you start, and in the end, you can, of course, do a lot more. The reason for starting here is just that it makes it easier to keep the sound of the triad in there.

But triads are also great for adding extensions and colors but also how it helps with some strong melodies.

There are two levels to using upper structures. First, let’s look at how you can use a system to create shifting lines and the second is creating a flow of shifting colors on a single chord.

The best way to understand this is to look at the available triads over a Dm7. That is easy if you write out the scale in 3rds from D.

This gives you Dm F Am C triads, the rest are not directly useful for the sound of the chord. 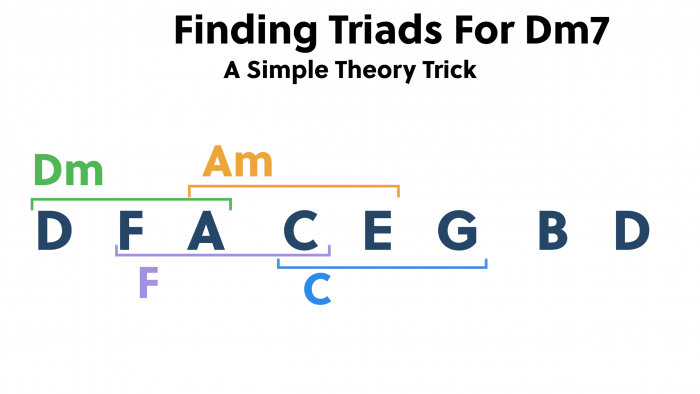 You can build the same thing for G7 altered, for voice-leading purposes then I am starting on Db, but the result is as you will see, the same:

That gives you: Db Fdim Abm Baug Eb and Gdim and Bbm. For the G altered chord then pretty much everything will work, so there are more options. 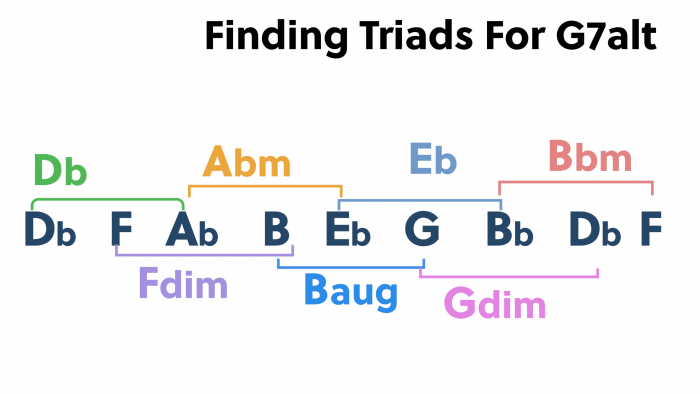 In the line then you can see how I am using an Am triad over Dm7 and then moving that to Abm on G7 altered, so I am really just voice-leading or shifting the upper structure triad to create the lick.

You can even do this moving up from Am instead of down so you go to Bbm:

What is Better Than One Triad?

The previous example was using two triads on the G7 altered: Bbm and B augmented, and constructing melodies like this is a great way to create interesting lines and also often lines that span a larger range. 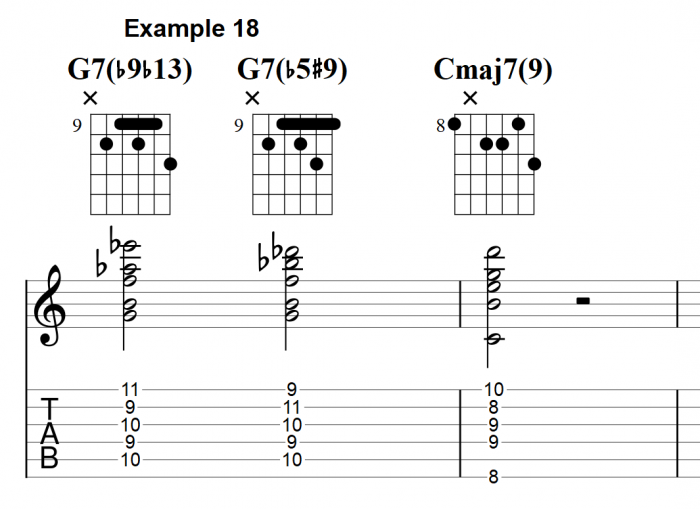 The easiest way to get a triad pair like this is to just take two triads that are next to each other. Because, this works better if there are no common notes between the two triads, especially for the next approach to creating melodies.

A basic version of this type of lick using Abm and Bbm triads on G7altered could be something like this:

You can see how the Dm7 lick is also using an Am triad and that helps make that transition stronger. 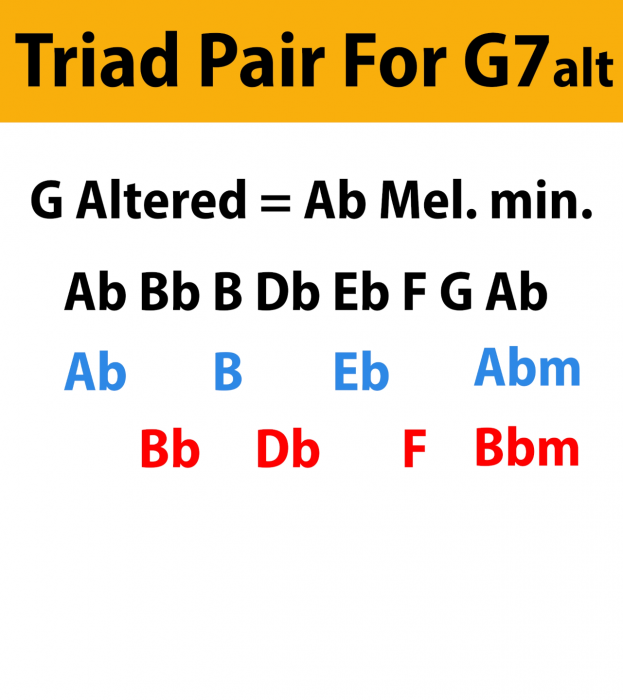 Another way to make more adventurous lines is to work with melodies that connect inversions of the triads.

If you take B augmented and Db on the G7 altered then that could give you something like this:

An incredibly useful tool that, like triads, can really add something to your soloing is using pentatonics in your jazz lines. In this video, you can see how pentatonic scales can create completely different sounding melodies and how to put them to use on pretty much any type of chord. This approach is a great shortcut to a more modern sound in your playing.

7 Pentatonic Tricks That Will Make You Play Better Jazz Solos