The 3rd lesson in my series on turnaround is about how you deal with tritone substitution and altered dominants. I’ll try to give you an idea about what scales and arpeggios to play, and in the Etude I’ll also try to give demonstrate how I use it, notes to aim for and other useful tips.

The main turnaround that this lesson is about is the first 2 bars of example 1, where the IV is replaced by a  tritonesubstitution: Db7. If you are familiar with my lessons on altered dominants and tritone substitution you will know that the progression is almost identical to the one shown in the next line where I use G7 instead of Db7, the same holds for the F7 which could be replaced by a B7. 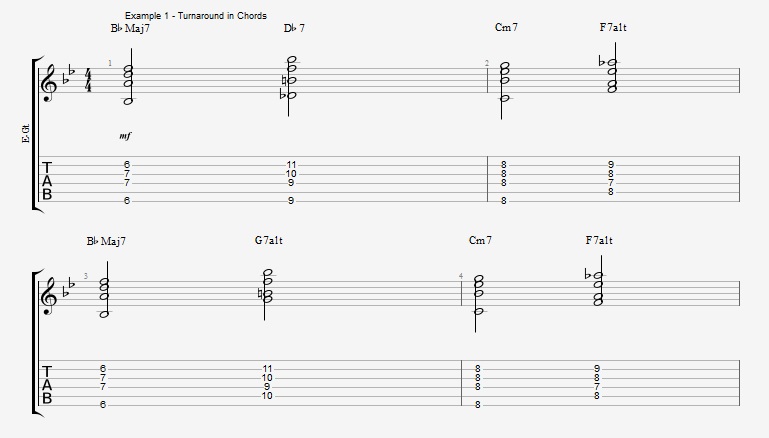 Let’s first go over the scales: Since the progression as a whole is in the key of Bb we use the Bb major scale on the Bbmaj7 chord and the Cm7 chord.

For the Db7: A tritone substitution is approached as an Lydian Dominant, so that would make the root of the chord the 4th degree in a melodic minor scale. That means that we get Ab melodic minor. You should notice that Ab melodic minor is the same as G altered too.

The same is true for the F7alt: F# melodic minor, and it could be seen as B lydian dominant too.

Now that we have scales for all the chords we can chose a few arpeggios for each one. For the Bbmaj7, Db7 and Cm7 chords I am using the arpeggio of the chord it self and an arpeggio that is a diatonic 3rd above or below the root of the chord. This is because that way this arpeggios will have a lot of common notes with the chord and fit it very well.

For the F7 we have the issue that the diatonic chord in the scale is an Fm7b5 which is not that useful or strong on an F7. The way I chose to fix this was to use the diatonic arps of the tritone substitute (B7, the 2nd arpeggio) and the 3rd of B7 (Ebm7b5). Those both contain both 3rd and 7th so that they convey the sound of the F7 really well.

In my experience you learn more from sitting down and trying to work on writing strong lines than just copying other peoples lines, so you should consider trying to analyze the things that I do in this etude and use them in you own lines. That way you really train your ear and your taste, two very important aspects of improvising.

The first turnaround is simply starting with a Bb major triad and the works up the scale to hit the Ab on the Db7. On the Db7 the line consists of an Abm triad which is a good upperstructure for that chord (try playing a Db7(9) chord). On the Cm7 the melody descends down an Ebmaj7 arpeggio and continues down an GbmMaj7 arpeggio on the F7alt.

I often use the “Coltrane” patter in fast moving progressions like this. In the 2nd turnaround the melody on the Bb is an F major Coltrane pattern: F G A C which works very well with a Bbmaj7. On the Db7 it continues with a smal scale run that leads in to the Cm7 arpeggio in inversion over the Cm7. The line on the F7alt is really a sort of F# minor cliche melody that  is a minor version of the Coltrane pattern, relative to F# it is 1,2,b3 and 5. Here it’s played descending.

The Gb of the F7alt resolves nicely to an F on the next Bbmaj chord. The melody continues up a Dm7 arpeggio in inversion. The Db7 line is using a Bmaj7 shell voicing arpeggiated with in a melodic way. The idea on the Cm7 and F7 is connected by using the Coltrane minor pattern on the Cm7 (1,b3,4,5) and then continuing with that idea using the B major Coltrane pattern on the F7. This is a good example how the interchanging between altered dominant and tritone substitute can give you some melodic ideas that you would maybe not otherwise arrive at.

On the last turnaround the Bbmaj7 line is a Dm triad which is followed by an Ab minor triad on the Db7. This time the Ab minor triad is played so that it resolves to the 5th of Cm7. On the Cm7 it is first ascending up an Ebmaj7 arp in inversion and then resolves down an Ebm7b5 on the F7alt and finally ending on the 3rd(D) of Bb.

As always you can download the examples I used as a pdf here:

I hope that you liked the lesson. If you have any questions or comments then feel free to leave them here or on the video. Please subscribe to my YouTube channel and feel free to connect with me via Instagram, Twitter Google+ or Facebook to keep up to date with new lessons, concerts and releases.